From Binance Hacks to Receiving Salaries in Crypto 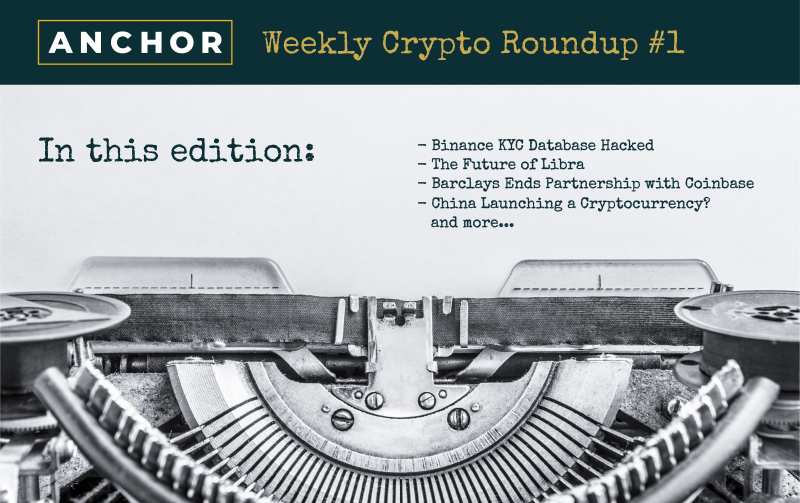 Welcome to Anchor’s inaugural Weekly Crypto Roundup! In this virtual space, we explore, review, and provide honest commentary about headline news, current trends, and events as we navigate through the land of blockchain and crypto seas.

As an experienced trader and crypto enthusiast, I am a proud member of the Anchor team and am passionate about developing content that connects, inspires, and engages with fellow cryptonites.

I hope you enjoy this journey with me and join the conversation on The Anchor Project Community, as well as the Anchor Trading Community on Telegram.

Binance is the world’s largest crypto exchange based on trading volume. According to Cointelegraph, their story timeline goes something like this:

That being the case, Binance soon became front page news in crypto and mainstream media, and it was hardly surprising that the exchange became a main target for hackers.

Although Binance has already experienced turmoil in terms of the now famous security breach, when the hefty amount of 7,000 BTC was stolen; on 7th of August, the exchange faced yet another controversial affair. An individual operating under the pseudonym “Bnatov Platon”,  provided CoinDesk with extensive information about attempts to obtain millions of dollars in exchange for declining to release information (10,000+ personal photos with various ID forms) about customers from one of the world’s largest cryptocurrency exchanges.

CZ did address the public, shortly after the scandal took place, but was reassuring that there is no need to push the panic button, as the team is still investigating what could have potentially led to such outcome. Read more here >>

A rather interesting observation points to the fact that the images, which have been released, do not contain digital watermarks imprinted by the system. Be that as it may, red flags across the globe have been raised.

This incident carries a negative connotation, leaving us to wonder if users around the world will be indifferent to the scandals or will it shake their confidence enough to make them stray? Only time will tell.

What is most definitely certain is that Binance is yet to withstand the test of trust and security matters. We sincerely hope they’ll get through this rough patch in tact, as Binance can be viewed as one of the elements fueling skepticism towards crypto at the moment.

The Future of Libra

The legislation revolving around the Libra coin is lingering in limbo. Regulatory scrutiny is increasing and that might be considered as a positive outlook. Putting clarity on the guidelines, under which the mature version of the coin can develop, may only result in  healthy progress.

Thus far, it is more than evident that Libra, alongside any other cryptocurrency for that matter, has the ability to disrupt the existing power structures that prop up the world’s financial system.

Perhaps that is a primary reason for Libra receiving an unbalanced response.

Certain US congressmen have already expressed concerns and disbelief in the ongoing project.

Even though Facebook and its subsidiaries are doing everything in order to win over the regulators, the biggest challenge they’re facing is making it a payment instrument and not a security.

Taking into consideration the fact that they are facing extremely tight governance and need to acquire tons of licenses, it is highly unlikely to see this case unravel itself any time soon.

Do keep in mind that all of the above mentioned needs to be achieved on an international scale, meaning every single administrative decision has to be adopted worldwide, otherwise to whom would Libra association be accountable.

Under given circumstances, one could conclude that Facebook’s Libra may never be released. What do you think? Tell us on the one of the most prestigious banks in the world terminated relationship with one of the most renowned digital currency exchanges, Coinbase based in San Francisco.

This action backfired on Coinbase users who held the British pounds (GBP). Why, you might be asking yourselves. Well, it’s because all those who favored GBP, relied on something called FPS.

FPS is an abbreviation for Faster Payment Scheme. It’s a system which enables users to instantly withdraw or deposit British pounds at the exchange. Of course this development left UK clients devastated as it takes days now for their orders to be processed.

With that in mind, Coinbase needed to seek new collaboration immediately. It didn’t take them long to establish an accord with a pretty young bank, ClearBank.

Many are under the impression that a newly formed deal had a lot to do with Coinbase delisting Zcash from their platform. There is a suspicion floating around, indicating that such a move might have been a result of the zero-knowledge proof technology, which is the backbone of Zcash business.

Apparently, ClearBank does not feel comfortable around the idea of supporting a cryptocurrency which is capable of completely masking the transactions, making it the most private and anonymous one currently available on the market.

This is perhaps one of the biggest, most recent announcements in the crypto space, and a bit confusing. Over the past few years, the Chinese government has been quite explicit on where exactly they stand when it comes to crypto. There have been numerous efforts to ban not just mining, but to eradicate crypto trading as well.

As Aljazeera reported, quoting a senior official from The People’s Bank of China, they are ready to issue their own cryptocurrency.

There are speculations that this bold move was made as a response to Libra’s news.

Creating a national cryptocurrency may reap benefits when it comes to the economy of a certain country. This begs some interesting questions:

Think you know the answers? Discuss it in our Telegram Community

New Zealand is feeling confident when it comes to cryptocurrency development and is in the race to become a pioneer.

For those who missed recent happenings, on the 7th of August, a draft law has been introduced which led to the ruling by their national tax authority that states the following:
As of the 1st of September, those wishing to have their wages compensated in cryptocurrency may opt to do so.

There is a catch – the digital currency of choice must also be pegged to at least one traditional fiat currency and must be able to be converted directly into a standard form of payment, in regular, fixed amounts.

It is still baffling as to how they plan to achieve stability within the transaction processes cryptocurrencies are still largely unregulated and represent a highly controversial topic. It will be interesting to see how will they manage to deal with potential challenges.

Adoption of cryptocurrency is a fairly slow process. With its promises to alter and forever revolutionize the world of business and finance as we know, some are already jumping onboard trying to catch and ride the wave, while for others, turning to it for salvation is the only remaining option.

As the New York Times reports, one such story took place in Venezuela, as the country was plummeting into political and fiscal depths.

That’s when Bitcoin stepped in, infiltrated the country, and started grounding and spreading its roots.

How so, you might wonder. Well, the current, subservient financial system is collapsing, better say is already shattered to pieces. The hyperinflation period has been bestowed upon the citizens of Venezuela and the only way out of the messy situation is to convert devalued Bolivars into something of value.

At a time, nobody could have possibly predicted that the rescuer was going to be none other than BTC, as it offered relatively strong, sustainable value, in comparison to the national currency.

Shortly after this publication, stories similar to this one have emerged, showing the power of Bitcoin regardless of geopolitical factors.

Final Thoughts for this Week

The cryptocurrency industry, as well as the blockchain technology itself, are still in their infancy. Fully-fledged use cases are just beginning to reveal themselves. It is obvious that the world is about to enter a new era where technological advancements stretch beyond our reason and comprehension and are implemented in nearly every segment of our lives.

So, what should you watch out for in the upcoming period?

The long anticipated BTC “golden cross” has finally come to realization. For those who are not familiar with the previously mentioned indicator, golden cross is a traders’ tool which suggest when a bull market lies ahead.

Basically, such a scenario occurs when a short term moving average indicator crosses path with a long term moving average. Chronological look of this positive momentum indicator shows that it rarely makes gaffes, nor it is susceptible to them. A lot of traders will swear by it.

Both the fundamentals and technicals, as well as the general optimism, are pointing to another Bitcoin rally. The price surge is expected to produce enormous returns; percentage wise, expressed in the tens of thousands.

If that happens to be the case, regardless of Bitcoin decoupling from other altcoins, you may rest assured the whole market will follow the trend and see the bright side.