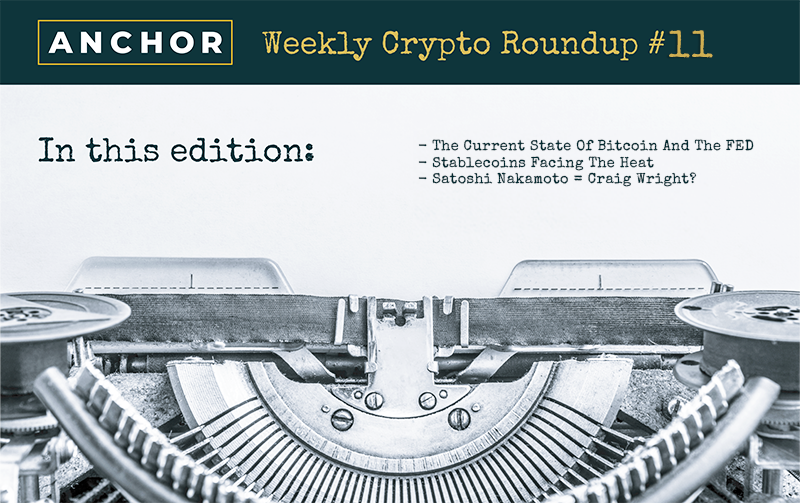 Apparently bears are prevailing. Are bulls patiently forming a counterattack meanwhile? Could it be that whales are trying to manipulate the market by luring the rest of us into the trap of selling so they could pick up the crumbs at a later stage and double the profit?

We can’t say that we aren’t used to seeing this type of situation. Whether it’s the political circumstances that have the most influence, human psychology or the stars, we are amidst the trading battle and the end is far from perceivable or conceivable.

But for us to be on guard, we must carefully construe the upcoming events and analyze the news.

Therefore, let’s jump into it.

The Current State of Bitcoin and The FED

21st Century Gold Rush written by SD Bullion, financial services company that deals precious metals online and currently sits at #177 on the Inc 5000’s list of the fastest-growing companies in the United States, has included a very interesting study in its book.

On page 12, you may find that according to the research conducted by DollarDaze.org, including some 775 fiat currencies, there is no historical record of a single one succeeding in retaining its value.

Excerpt taken from the book emphasizes the following:

20% failed through hyperinflation, 21% were destroyed by war, 12% destroyed by independence, 24% were monetarily reformed, and 23% are still in circulation approaching one of the other outcomes.

Here’s perhaps the most peculiar fact – The bank of England was founded in 1694, hence the British pound Sterling is the oldest fiat currency in existence. At a ripe old age of 324 years, anyone would think it is by far considered the most successful ever.

However, it depends what’s the angle you look at it. Success is relative.

Once upon a time, the British pound was defined as 12 ounces of silver, so it’s worth less than 0.05% of it original value. In other words, arguably the most successful in existence has lost 99.5% of its value.

History is packed with various examples of poor money management.

That being said, we’ve been hearing alarming news lately regarding the United States Federal Reserve printing more money than the entire market capitalization of Bitcoin. Their balance sheet is about to reach a whopping 4 trillion.

Practically, the Fed has literally injected $210 billion into the economy.

Purchasing government bonds, also known as quantitative easing, in order to provide economic impetus and act as a catalyst has proved over and over to have reckless long-term effects on the country.

Assets such as gold and Bitcoin cannot be artificially inflated and that’s exactly why their supporters advocate lowering reliance on fiat currencies.

Mervyn King, former Bank of England governor only confirmed concerns related to the current economic state… Not so long ago, during the International Monetary Fund’s general conference, he delivered a speech in which he explicitly stated that the world was “sleepwalking” into a financial crisis even worse than that of 2008.

“By sticking to the new orthodoxy of monetary policy and pretending that we have made the banking system safe, we are sleepwalking towards that crisis,”

McKinsey & Company also announced in their latest report that nearly 60% of the world’s banks would need to make changes or they would struggle during the next downturn.

And while many turn to cryptocurrencies for sanctuary and peace of mind, others bash them and call them unstable, deeming them as a horrific idea.

A prominent Medium author begs to differ to those opposing.

A writer that goes by the pseudonym “PlanB” published a price model, based on the scarcity of BTC.

The analyst predicts that after the next halving event, which is set to occur on the 14th of May 2020, Bitcoin will reach a market cap of $1 trillion, giving the single coin value of $55,000.

The 18th million bitcoin has been recently “extracted”. That means that there are only 3 million remaining.

Another factor that adds to the scarcity equation is that somewhere between 14% and 19% of all bitcoin mined has been lost or stolen.

So hypothetically, in a period over seven months, the BTC price could multiply seven times if the theory of scarcity holds true.

In case you wonder on what grounds the author makes such claims, here’s a short explanation…

As many may already know, Bitcoin is often referred to as the first scarce digital object, much akin to gold or silver. And that’s where the conclusion was picked from.

But PlanB also firmly believes that citizens of countries exercising negative interest rates or having a “predatory” regime will be the first ones to convert.

Looking at it from that perspective, you may think that the price could indeed soar.

But have in mind that price speculators and analysts are all around and each and every one of them has a unique stance.

For instance, Mark Yusko, from Morgan Creek Digital has predicted a $7.4 trillion market cap for bitcoin by equating it to gold.

Although the current signals don’t instill much encouragement to crypto enthusiasts, we will all continue to closely observe the market in hope it begins to flourish soon.

Stablecoins are against the regulators yet again. It appears that one edition after another, stablecoins manage to sneak into our publication.

No surprise there. They are major discussion topic not only among entrepreneurs and developers but also among people from the financial sector, traders, various businesses, as well as government departments.

We expect Zuckerberg to testify before Congress and we all anticipate to see and hear the outcome. He still stands tall behind his promise that Libra won’t see the light of day without the US approval.

But so far, it all points to a long-established fear that stablecoins might be classified as securities.

It is absolutely mind-blowing how popular stablecoins have become and how much people are using them to do transactions on a global level. In one way or another, stablecoins enable them to keep unlimited amounts of fiat in their pockets without having to be customers of a specific bank or in some cases even to avoid the KYC procedure.

The best example here would be Asian companies perhaps, with Tether being the dominant one.

One may argue that Libra is the one who triggered the legislative avalanche upon everyone in the space.

Facebook’s Libra could potentially shake and transform the entire banking system. The weirdest part is that it hasn’t even been released yet. So, when you think about it, all this commotion is based upon an idea.

On the other hand, Ripple is scaling rapidly. They managed to develop enviable speeds on their platforms, and gain an edge over the competition on TPS territory. The number of banks and financial institutions relying on their core products, from xRapid and xCurrent to xVia, is growing from month to month.

The financial service committee reported in July that their project has a remarkable resemblance to an ETF, which does fall within SEC’s purview.

Should they decide to place stablecoins as a whole under “the securities” category, we will see a massive pullback from the exchanges first. Nobody would want to be correlated with them under such a scenario, thus it will lead to delisting.

Another worrying point for some is if the United States decides to adopt this rule, what will hold Europe from proceeding in a similar manner.

So there you have it, any cryptocurrency whose value is pegged to a fiat currency or any other assets will most probably be automatically considered as a security.

Guess what cryptocurrency isn’t pegged to fiat or anything of that sort, yet again passes the criteria for a non-collateralized stablecoin?

You got that right – ANCT 😉

Mr. Craig seems to be quite persistent on the matter of who is behind the Satoshi pseudonym.

Although many see this subject as a closed case, the man simply doesn’t give up.

At first, he asserted that he is the genuine creator, the brain behind it all. Then the story took a slightly different turn when he began claiming it was actually his business partner who passed away in 2013.

Regarding that; He is still to pay over $5 billion worth in BTC, as the judge instructed him to do after his allegations have been dismissed as false.

Even though the court has confirmed that Mr. Wright is truly prone to forgery and lies, he carries on further tangling himself up.

He was recently invited as one of the panelists to Blockchain and AI Forum conference held in London.

Some of you might forever cherish the moment when Tone Vays walked up on the stage wearing a t-shirt saying: “We are all Satoshi Nakamoto, except for Craig Wright” and sat right beside him.

Believe it or not, that t-shirt is being sold on Amazon these days.

Anyhow; during the summit, he addressed the audience: “Either I am Satoshi or Satoshi plagiarized me”

We leave you to draw your own conclusion regarding who could really be the mysterious man, woman or group behind the revolutionary idea.

Be that as it may, it’s clear that anybody who attended blockchain gathering in London was much amused.

Let’s summarize what we’ve learned this week before we wrap up.

Diversifying your portfolio might be the best investment approach you could apply should recession come knocking on the door. Have you read our blog post about hedging ahead of the Bitcoin halving event dure next year?

It doesn’t matter how big of a patriot you are, your government or bank might not be able to protect you from their flaws.

Stablecoins might not go extinct any time soon, but Anchor is here for good!

Will the real Satoshi please stand up? 😊