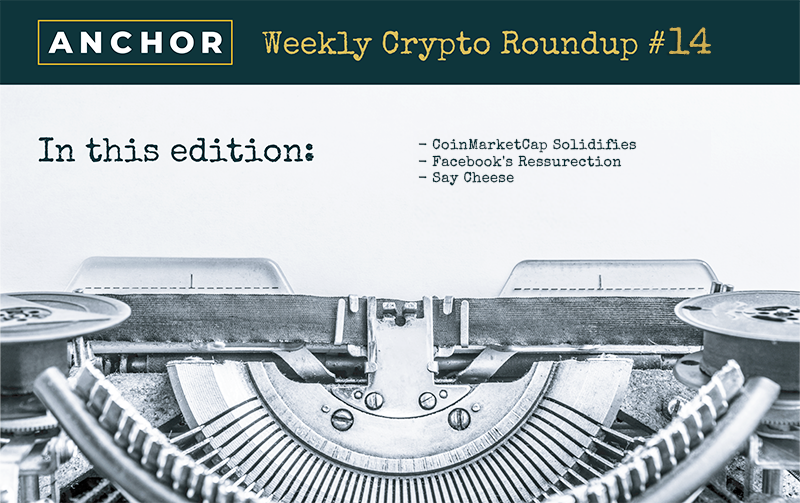 Fellow Anchorians, grab onto something or fasten your seat belts because in this Roundup, we’re in for a fast ride. We’ve prepared a bunch of news snippets that will strengthen your knowledge and calibrate your understanding of the crypto stream.

Whether it’s an in-depth analysis of the market or a cold, straight-up serving of the news, we got your back.

Everyone who is part of the crypto space can attest to the following – Not a day goes by without checking out the current state of affairs on CoinMarketCap. One of the largest web platforms for reporting stats for various crypto projects, as well as exchanges, has been facing a challenging issue ever since its inception. How to deliver accurate measurements?

No need to be perplexed, here comes the explanation…

For a long time, traders, miners, and investors were turning to similar sites, looking at the volume column as an adequate indicator for representing the attention a particular coin gets at any given time. Daily volume, or the 24h volume, is considered by many as a good starting point for sketching the development outlines of a certain token.

However, as time went by, everyone drew the same conclusion – figures reported under “volume” were far from an accurate representation and were often a subject to wash trading and means of manipulation.

It was only a matter of time before volume would lose its value as a metric. This complication made the entire space anxious.

CMC stated that the new gadget is a way of escaping dependence on volume reporting. The leading crypto data firm has launched the new widget hoping to improve the comparative system by showing exchanges and token pairs based on liquidity. As we found out, the new tool will incorporate data from 3000 digital assets.

Carylyne Chan, chief strategy officer at CoinMarketCap, expressed a desire to shift focus away from volume and elaborated what the company aims to achieve with its new methodology:

“Today, we are introducing a new metric to highlight what matters most to investors and traders: liquidity. With our Liquidity metric, we hope to provide public good to the crypto markets by encouraging the provision of liquidity instead of the inflation of volumes.”

Just when you thought the whole deal with Libra was tumbling down, Facebook decided to quietly launch a new fiat payment system dubbed Facebook Pay. Libra may continue to face a hostile and agitated audience all around the globe, but evidently, that has absolutely no impact on Facebook broadening its specter of services.

The slogan that encompasses their latest campaign does carry a rather electrifying message: “Empower people everywhere to buy and sell things online.”

It was just a couple of days ago that this social media giant announced the introduction of a payment system that is designed to facilitate payments across Facebook, Messenger, Instagram, and WhatsApp.

“People already use payments across our apps to shop, donate to causes and send money to each other. Facebook Pay will make these transactions easier while continuing to ensure your payment information is secure and protected.”

Clearly, they have had enough of regulatory scrutiny, so the company decided to avoid any further commotion and rumor by stating that Facebook Pay is built on existing financial infrastructure and partnerships. The firm added that the payment service will be kept separate from Facebook’s new Calibra wallet and the Libra network.

Apparently, this new feature will be visible in your Messengers as early as this week. Whether you wish to purchase a ticket, donate to a specific fundraiser, buy something online or simply would like to send a payment to another person, Facebook Pay is there to satisfy your needs.

As you may remember, not so long ago, every major U.S. payment processor has decided to drop out of the Libra Association partnership, leaving the tech giant to dry.

And when most began doubting their impending plans, they rolled out yet another solution that could easily transform our payment habits.

Cardano has completed the first “balance check” stage for its testnet called Shelley. The so-called “Snapshot” feature is one of the last steps towards finalizing the staking rewards system. This long-anticipated reform has finally brought smiles to ADA investors.

The company also launched a website, which will discharge special testnet wallets over the next few days.

Charles Hoskinson, CEO of IOHK, was kind enough to indulge us with his amazing YouTube video, explaining what exactly “snapshot” is in a nutshell and how it functions. Basically, Snapshot copies data from Cardano’s latest block and then inserts it into the testnet’s genesis block. Bear in mind that this process doesn’t actually move cryptocurrency. It only duplicates balance data.

All this sounds wonderful, but it doesn’t make much sense…

This move enables IOHK, as well as ADA hodlers, to run tests under realistic conditions, thus allowing them to monitor the overall performance. By permitting users to engage, Cardano will be able to ensure that the network is meeting required expectations and achieving the desired level of decentralization.

Hoskinson noted that Cardano’s new software is undergoing an audit with the results scheduled for release in January. He added that users who want extra security can rotate their funds to a new wallet address.

Seed phrases have become a typical way of securing funds. Perhaps that’s why Charles brought up phishing as one of the main issues:

“We will never ask you for your password or keywords. Any time you see that, it’s a scam or impersonation.”

This is the first of two snapshots. “The point of the first snapshot was to get everyone on the same frequency,” Hoskinson said. Those who missed the opportunity to mark the turning of a new leaf will definitely get a second shot.

A follow-up snapshot should occur in one or two weeks at most.

Ultimately, testnet staking should go live around this month. Clients who missed on the testnet will be able to participate in staking in early 2020, right around the period when Cardano’s mainnet is expected to undergo the Shelley upgrade.

As you may see, the countdown to implementation has begun. All you ADA lovers out there, have your fingers crossed.

The ubiquitous nature of crypto is overwhelming.

Whether you’re on the move, traveling somewhere, need to book a place to crash, starving and want to grab a bite, wanna catch a movie, take your pet to a vet’s checkup, no matter what the case is, crypto has you covered.

There are over 650 airlines accepting payments in various digital assets. The same applies to hotels, hostels, even Airbnb. Numerous clinics, restaurants, distinct amenities, all accept some cryptocurrency.

And for your own convenience, crypto debit and master cards are already widely available nowadays. MCO Visa Card, BlockCard, Coinbase Card, Wirex are just some of the brands at your disposal. And every single one of them offers some sort of perks to its loyal customers – staking of certain tokens, chargeback under some conditions and many more.

So, if there’s ever been a brief moment of doubt over whether crypto will reach mass adoption, the increasing number of use cases is casting them away.

Yes, there are occasional erosions along the way, hurdles and traps constantly popping up, troubles lurking on every corner and there is a never-ending duel going on between the legislative bodies and crypto/blockchain entities. But it all keeps rolling forward, much in tune with a perpetual motion machine.

All these industrious endeavors help shape the future. There’s a remarkable resemblance between a blockchain forthcoming epoch and a sunny day 😊