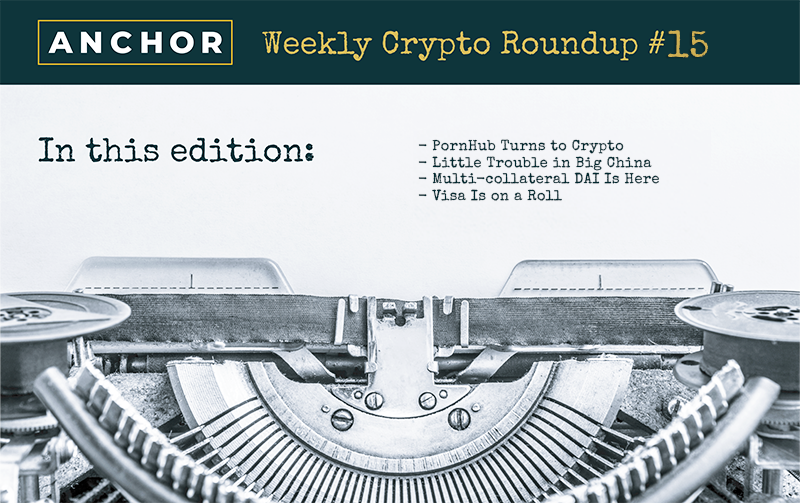 Greetings, fellow Anchorians! There’s never a dull moment in the world of crypto, right? This past week, while the price of Bitcoin (BTC) had many investors sweating, turning the market bearish, altcoin enthusiasts rejoiced as the price of Ether (ETH) was going up.. Pairing is caring, and with the altcoin market sending bullish signals, the ETH/BTC pair is on the rise!

This week has also seen the merger of Whistone US (Texas) and Northern Bitcoin AG (Germany) to set up the largest bitcoin mining facility in the world. Yeah, you can’t beat China’s cheap electricity and easy access to mining machines made by local manufacturers, but Texas is turning into a mining haven. First, the Chinese giant Bitmain opens a 50-megawatt farm in Texas, with plans to expand it to a 300-megawatt capacity, then this new merger of Whinstone and Northern starts a 100-acre farm construction with a total capacity of one gigawatt. Slick!

Still, nothing warms my heart more than news of how crypto can help ordinary people, so let’s kick off this week’s Roundup with…

“We are all devastated by PayPal’s decision to stop payouts to over a hundred thousand performers who rely on them for their livelihoods.”

The Verge Currency team promptly wrote a guide for models to switch to verge easily. Judging by the comments, performers do need education on how to use crypto, so this was a welcomed move by the Verge team.

“For years, PayPal has been moralizing on who can receive payments, leading to today, removing the right of adult entertainers on their platform,” an editor at Verge Currency wrote.

China has always been an enigma. Marching to the beat of its own drum, it was never easy to predict or even analyze what’s going on in there. As far as crypto is concerned, there isn’t almost a day without buzzing news. Sometimes the signals are mixed, though.

This sentiment seems to be confirmed by the People’s Bank of China (PBoC). “The financial industry either lacks the standards or needs to update the existing standards,” vice president of PBoC, Yifei Fan, said. He also added: “The current regulations for financial services are not clear and strong enough to guide high-quality developments in the industry.”

Two industry standards were already created by the government, one for registering all new blockchain projects and the second for regulating fintech product categories for digital payments.

Even the Chinese military is enthusiastic about crypto! Namely, the newspaper of China’s armed forces suggests that giving tokens to soldiers would be a fantastic idea. “To award or deduct tokens according to one’s daily performance and thus generate an objective assessment would effectively energize the human resource management,” it was stated.

On the other hand, China’s blockchain restrictions are in place. Moreover, last week saw a new move in PRC’s crackdown on digital currency trading. Crypto giants, Binance Holding Ltd  and Tron have been banned from this country’s equivalent of Twitter (Weibo). Weibo has banned users from sharing any posts that contain the terms “blockchain” and “crypto trading”.

At the same time, the Shanghai Internet Finance Rectification Agency and the Shanghai Bureau of PBoC have signed an official notice demanding raids and inspections on local crypto exchange services. Crypto-to-fiat trading and ICOs are still banned in the country.

Is China pro-blockchain or anti-blockchain? We understand the struggle China experiences with crypto. After all, aside from numerous frauds, it seems that out of 32,000 Chinese companies registered as blockchain tech users, less than 10% in fact own the actual technology.

More likely, the People’s Republic of China is clearing the way for its own cryptocurrency. The country is not content only to win the trade war against the United States but seems bent on to de-dollarize the planet and take over the world as an economic superpower. A new digital currency would help the circulation and internationalization of the Yuan. Rumor has it that this government-supported crypto will be backed by gold and defy the spirit of crypto technology. Instead of decentralization and freedom, the digital Yuan will be created to give China more control over the financial system.

Who knows, maybe China will be content to use fintech to control its own citizens, but the ability to award or withdraw tokens from individuals to me seems scarier than a Death Star.

After five years of development, the MakerDAO team has finally launched a multi-collateral stablecoin. The legacy token, single-collateral, will be deprecated and renamed (taking the name SAI), while the name DAI will go to the new multi-collateral version.

No changes will be made to SAI as it will continue to function normally. However, users are advised to migrate to new multi-collateral DAI. Practically speaking, users of the decentralized financed platform (DeFi) can borrow DAI tokens after committing ether (ETH) as collateral or put up other cryptocurrencies as collateral in MakerDAO system.

MakerDAO token holders need to vote on crypto assets inspected by MakerDAO’s Foundation’s Risk Team before being accepted as collateral in the system. Seven cryptocurrencies are currently being evaluated including prediction market Augur’s REP token and Brave’s BAT token.

Part of the new deal is the plan to allow users to earn interest on DAI by locking up a DAI Savings Rate smart contract on ethereum. It means risk-free return at the protocol level, which could easily cause an explosion of new innovative ways to implement DAI. Or at least that’s what MakerDAO Foundation CEO Rune Christensen hopes for.

Indeed this means that users can begin earning rewards on their DAI holdings, as cryptocurrency exchange or application can integrate DAI Savings Rate. Prediction is that the DAI Savings Rate could be higher than dollar-pegged USDC, but the rate would also fluctuate depending on the supply and demand of the MakerDAO platform.

Some experienced users already hail this event as a milestone in DeFi history, wondering what’s next to come with a number of options and wishes placed on the table. Bitcoin being accepted as collateral for DAI, DAI becoming number two stablecoin, bringing decentralized cross-chain interoperability to DeFi, these are just some of the suggestions by the community.

Others believe that DAI needs to be explained better and brought to more people. From the regulation side of the equation, it’s not clear what will be the response to DAI. The fact remains that inertia of trying to fit the existing regulatory framework onto new technologies will continue until everyone realizes that stability is not purely an aspiration and that owning your own coins is not a marketing mirage.

Visa is on the roll

Visa is one of the largest global payment solution providers. They have developed a blockchain-driven system named LucidiTEE that aims to enable multiple parties to compute large-scale private data jointly.

Particularly interesting is the claim that the system based on algorithm ensures fairness because if one party gets the output, the same will be availed to all honest parties. So, even if any of the parties’ subsets act maliciously, the compliance of policies and fairness in all computations is guaranteed.

Data is crunched within a trusted execution environment (TEE), as well as the utilization of history-based policies that prompt the presentation of any computational output to all parties.

This is not the first time that Visa has opted for blockchain as a backend for its key system. This means that blockchain is gradually replacing old legacy systems, bringing forth better performance, enhancing transparency and generally making the payment process more convenient and secure.

Visa doesn’t stop there, it seems. They are on a roll! Check this out. In the same week, when LucidiTEE was announced, Visa’s Coinbase Card expanded support to ten additional countries and five more tokens. Holders of the card can now spend XRP, BAT, REP, ZRX and XLM in addition to the currently offered BTC, ETH, BCH, and LTC.

For the end of this roundup, one heartwarming news, also from Visa.

Namely, Visa acquired a minority stake in Nigerian digital payments firm Interswitch. While the exact amount of investment wasn’t revealed, Sky News reports $200 million for 20%. Whatever the exact number, Interswitch has passed a $1 billion which marks an important milestone for African tech. Interswitch is one of the rare companies that is both profitable and generating significant levels of cash.

Could this mean that partnered up with Visa, the African digital payment market would make its first steps towards crypto? One can only hope!