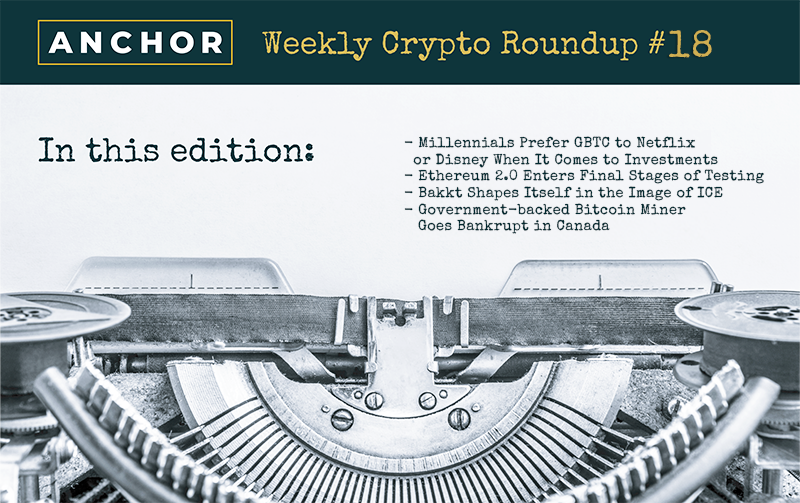 Anchorians, assemble! This week brings interesting news. For starters, Millennials are not being blamed for ruining one industry or another. Bakkt is steaming ahead. They lost their CEO to politics a few weeks ago, but that obviously didn’t slow them down. Canadian government saw its Bitcoin mining operation in the Atlantic provinces go bankrupt, for quite odd reasons. Ethereum 2.0 is ready for the final stages of testing which reminded me of another event that perspired this week. It seems that blockchain technology is maturing by the week.

“Seize the Day: Public Blockchain Is On The Horizon” is a study conducted by Forrester Consulting, commissioned by Ernst & Young. Findings suggest that the era of private blockchain will be coming to an end. Sure, public blockchains like Ethereum and Bitcoin sparked the tech revolution, but they didn’t initially support the privacy of transactions. Centrally controlled private blockchains were developed to mitigate this, allowing many companies to join the bandwagon without the risk of exposing confidential data.

Brokerage giant Charles Schwab has published a report about the top 10 equity holdings across generations. It showed that Millennials have a higher holding in Grayscale’s Bitcoin Trust (GBTC) investment product (1.84%) than Netflix stock (1.58%) or even Disney (1.68%).

GBTC is one of the most successful cryptocurrency investment products with a cumulative inflow of $305 million for the 12 months (ending in September).

Nimbus, Lighthouse, and Sapphire testnets were launched in June, as the third single-client Eth2 testnet. Prysmatic Labs first ran a private multi-client test where clients shared a fixed set of validators. But now a full end-to-end public network was launched. Clients could participate in a realistic environment, just like that of the mainnet. This was arranged so that the new production environment could mimic the chaotic nature of real live mainnet, helping the team to find cases and issues that spontaneously emerge, allowing them to iron out the wrinkles and boost performance optimizations.

“That was the first time multiple clients were able to work together to build the phase 0 chain,” said van Loon, co-founder of Prysmatic Labs. “Now, with Prysmatic Labs’ full end to end sapphire test network, we are seeing different client implementations sync for the first time. Like the interop event, this is a major milestone towards full multi-client interoperability.”

Shasper connected with the network last Tuesday, with six more clients ready to join. It seems that Trinity (Ethereum Foundation), Lodestar (ChinSafe) and Nimbus (Status) are among them. This will expend efforts to increase the network’s resilience as Prysmatic Labs continues to get support from Ethereum Foundation, Aragon and Ethereum Community Fund. Over $1.5 million in grants and donations was poured to make sure that Prysmatic Labs and others finalize this important upgrade of the Ethereum.

Bakkt Shapes Itself in the Image of ICE

Kelly Loeffler was appointed to the U.S. Senate, leaving Bakkt without a CEO. It’s still not clear who will be at the helm, but one thing is sure – Bakkt is not slowing down.

In September, Bakkt launched a market for physically delivered bitcoin futures. Options tied to these futures were announced in October and got launched a few days ago. Cash-settled futures tied to the first contract began trading in Singapore and already 1200 lots were trading in the new contract. This is similar to ICE’s oil derivatives leveraging its benchmark crude oil future and it marks the exchange’s breaking into the expanding Asian derivatives market.

“We’re using a similar playbook to expand our suite of products at Bakkt,” the company said.  “By starting with the physically delivered Bakkt Bitcoin (USD) Monthly Futures, we have a benchmark contract which provides the foundation for us to develop complementary products based on the needs of our customers.”

With a foothold in the Asian market, Bakkt set to race against CoinFLEX and FTX, new kids on the block that have hit big with a diversity of assets and high leverage. Asian markets are still largely unregulated, which boosts Asian crypto trading. However, regulatory crackdown is just around the corner and it could be very beneficial for Bakkt.

Last week we reported on Texas becoming a haven for bitcoin miners and presenting a great opportunity for industrial redevelopment. The failed aluminum smelting industry is lending infrastructure for bitcoin mining operations, giving new chances for the entire region to experience new growth.

Something similar was attempted in Canada. Great North Data was launched in 2013 and grew from a basement startup to a major provider of processing capacity in Atlantic Canada. Using the local sources of power (one of the creditors was Newfoundland and Labrador Hydro), it was backed by the Canadian government and the Business Development Bank of Canada. One of the goals was to develop this region.

Canadian MP Yvonne Jean Jones visited one of the Great North Data’s operations in June last year, noticing that the firm “invested over $9 million over the course of 5 years. $5-6 million of this total has been invested in contractors and equipment almost entirely hired and purchased from local sources in Labrador.”

Great North Data employed 25 full-time staff with plans to double this number. They anticipated sales exceeding $6 million by the end of 2018 and projected $12 million for 2019.

However, the bitcoin mining company has filed for bankruptcy. They have liabilities in excess of $10 million against assets of around $3.49 million. Business Investment Corporation, owned by the provincial government of Newfoundland and Labrador, is a secured creditor (owed around $320,000), while Newfoundland and Labrador Hydro, Business Development Bank of Canada and the Atlantic Canada Opportunities Agency (ACOA) are the unsecured creditors.

It’s not yet clear why the firm went bankrupt, but it seems that Great North Data faced excessive complaints. There was fear in the local community that bitcoin mining would incur power outages and that rates would go up. However, the data center’s fans were the ones to cause a mass of complaints. Loud noise seems to be the main reason behind Great North Data shutting down.

“We are where we are because that’s where the power is. The only other option is to shut down the business,” said Great North Data CEO James Goodwin. It seems that they were not able to defend from public outcry and decided to close the gates.

Really a shame for Great North Data, but the way I see it, the potential for the development of remote provinces is simply too great to pass. Especially in the areas which have an abundance of resources critical for mining, affordable electricity rates, cooler climate, and large space for operations like this to be set up.

Such a shame for Great North Data, but the way I see it, the potential for the development of remote provinces is simply too great to pass. Especially in the areas which have an abundance of resources critical for mining, affordable electricity rates, cooler climate, and large space for operations like this to be set up. Blockchain can contribute to the achievement of sustainable development and with technology growing up and evolving (go Ethereum 2.0, go!) all we need (it seems) is some kickass silent coolers!