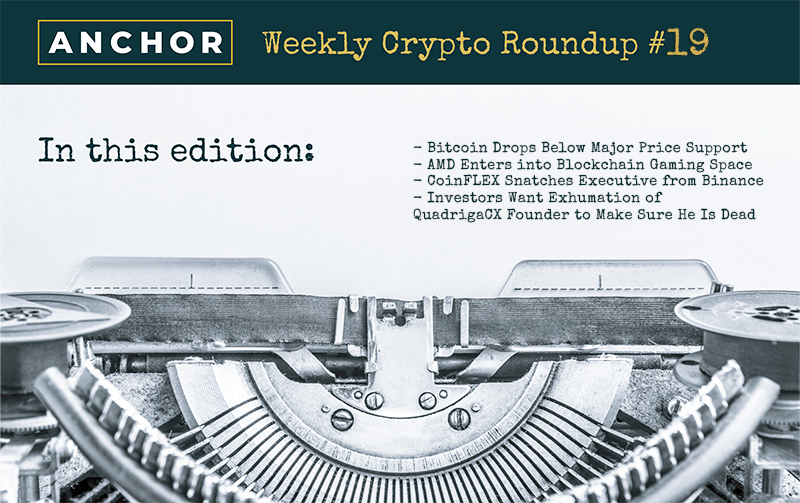 Dear Anchorians, this was quite a gloomy week. EU regulations coming into effect on January 10, 2020, intend to improve anti-money-laundering (AML) and know-your-customer (KYC) protocols. However, this intrudes deeply into users’ privacy, driving two more crypto startups to shut down. Namely, a crypto mining pool Simplecoin and bitcoin gaming platform Chopcoin are shutting down, preferring to go out of business rather than jeopardize their users’ privacy.

Chinese authorities are continuing their crackdown on blockchain companies. This time, the gaze of Big Brother is upon blockchain-based fitness app Qubu for alleged illegal fundraising practices. Turns out Qubu had little to do with crypto technology. They were simply trying to capitalize on (apparently) double-bind message by PRC’s authorities who declare the development of blockchain technology to be China’s priority while strengthening the regulations and trying to shut down crypto startups.

For example, the founder of bitcoin miner maker MicroBT, Zuoxing Yang, was arrested in Shenzhen on an embezzlement charge. It seems to be part of Yang’s feud with Bitmain, running since 2016 when he stepped down from the position of Bitmain’s director of processor design.

Anyhow, even without these gloomy reports, there are plenty of interesting proceedings in the world of crypto. Bitcoin continues to drop, slumping below the major price support for the first time since May. AMD pivots to blockchain gaming since its crypto mining gear biz flopped. CoinFLEX expands into gamification, snatching experienced exec from its competitor. Finally, there is a bit of bizarre news about the deceased founder of QuadrigaCX who took at least $137 million to the grave. Grab your favorite beverage, chillax and let’s begin…

Everyone’s forecasts for Bitcoin’s drop were betting on a bullish rally around $6500. On December 18, BTC slumped just above $6400. Now, before we continue, I want to point out that despite this sharp drop to 3-month lowest price, 54% percent of bitcoin addresses are still ‘in the money’ (according to IntoTheBlock intelligence company). The expression means that the current price of bitcoin is higher than the average price at which coins were acquired.

Now, the price has bounced back to a more or less steady $7200 mark. Analysts tracking the charts, looking for 3-day candles did foresee this bounceback and they think it indicates that the further drop is imminent. Moreover, Jacob Canfield, a guest trader on Forbes is among experts who think that bitcoin’s behavior will lead to a $5500 slump.

So, it would seem that BTC will experience a further drop. There are a million addresses that have acquired bitcoins in the range of $6600-7300. If the sell-off continues, they may panic and liquidate, leading to a deeper drop.

Except, one of the key metrics is hovering at record highs. Ok, so there is this number, UTXOs, counting the unspent transaction outputs. What are those? Oh, only the leftover bitcoins after a transaction. Now, a loss-making UTXO is the one whose price at the time it was created was higher than the current price. The metric of UTXOs in loss rose to all-time highs above $45 million, according to on-chain market intelligence company, Glassnode. This suggests that investors are holding bitcoins!

Holding bitcoins indicates that BTC is far from capitulation. The final stage of a bear market is not yet kicking in. Despite the apparently gloomy situation, the bulls are still active and waiting for the halving event to bring the promise of prices soaring again.

For the uninitiated, AMD is a hardware manufacturer going neck and neck with more famous Intel. They once bet big on cryptocurrency mining gear. Alas, their revenue all but disappeared entirely by the Q4 2018.

AMD has joined the Blockchain Game Alliance. The alliance is dedicated to promoting blockchain technology within the game industry. Obviously, the members are crypto-gaming startups, but among them is also a traditional gaming giant Ubisoft. AMD is bringing its high-end CPUs and graphics cards to the table, promising “computing tech that could potentially transform the way games are created, published, purchased and played.”

Another blockchain partnership of AMD comes in the form of a deal with Robot Cache and Ultra marketplaces. Both will use AMD’s latest Ryzen processors and Radeon graphics cards for optimal cryptographic computing performance. Joerg Roskowetz, head of the blockchain technology at AMD said, “Blockchain technology brings broader choice, security, and flexibility to both gamers and publishers. Next-generation blockchain game platforms will give gamers access to exclusive online content, and provide new ways for them to truly own it.”

I know I’m looking forward to this moment for the game industry. Are you?

CoinFLEX launched in early 2019 as the first physically-delivered cryptocurrency futures exchange. They are slightly behind the market share for BTC futures with 8.6% against Binance’s 9.9%

CoinFLEX is running cryptocurrency trading-based competitions. It’s part of their gamification strategy to offer traders the chance to win cash prizes by placing trades with the new order type. Apparently, it works like a charm, because during the 2-hour period the competition brought in $80 million in volume!

Looking to further extend their gamification efforts, CoinFLEX has poached Leslie Tam, an executive from rival Binance. Tam previously oversaw the over-the-counter (OTC) trading operations for Binance, one of the world’s largest cryptocurrency exchanges, where he held an executive position as lead of the VIP coverage and head of trading. He has joined the Hong Kong-based firm as its chief strategy officer. In his new position, Tam will have a broad mandate, leading the expansion of the firm into new territories as well as new products.

Personally, I think gamification is a great method for engagement and marketing, as well as learning and inspiration. We can only hope CoinFLEX will use gamification for the benefit of all, not just for toppling the competition.

Ok, here comes the weirdest bit of news I’ve seen this week. So, there was this guy named Gerald William Cotten. Just after he graduated in 2010 from York University in Toronto, Gerry learned about bitcoin and founded Quadriga Fintech Solutions in 2013. They had some initial success, installed a couple of Bitcoin ATMs in Vancouver, and saw some C$ 7.4 million in volume exchanged.

QuadrigaCX took a nosedive soon after, running out of money by June 2015. Speculative frenzy of 2017 seemingly pumped some life back to this startup, as they recorded C$1.2 billion volume. They did, however, struggle with cash-flow problems due to the exchange’s reliance on external payment processors and its lack of a proper accounting system. Then BTC crashed in 2018 and customers reported delays when attempting to obtain American dollars.

Now, Garry was no stranger to… less legal business practices. It seems that his partner, Michael Patryn was of… similar persuasion. Namely, previously known as Omar Patryn and before that as Omar Dhanani, was recognized by The Globe and Mail as an identity thief who served 18 months in U.S. Federal prison, with burglary and grand theft charges to boot.

Why is this relevant? Because it turns out that Quadriga never invested the funds entrusted to it, according to Chainalysis, a cryptocurrency tracking company! Quadriga used fraudulent WB21 as a payment processor. Quadriga used an unusual system for customers to withdraw their money. Rather than pay customers via bank wires, they were told to come to a nondescript building in Laval, Quebec to pick up the cash. Customers reported that once they arrived, there was nobody in the office, or that there was no cash to be disbursed.

Naturally, in 2019 the exchange was declared bankrupt with C$215.7 million in liabilities and merely C$28 million in assets. Sadly, Gerald dies in India under suspicious circumstances. Why suspicious? First of all, there are some discrepancies as to how he actually died. Death certificate issued on December 10 by the local municipality in India indicates cardiac arrest. Quadriga didn’t announce his death until January 14, stating that his death was due to Crohn’s disease. Moreover, Gerry apparently took passwords for his cold wallet to the grave, trapping some C$250 million (US$190 million) of customers’ money.

It’s not clear whether Cotten faked his own death to defraud customers or his real death simply exposed the Ponzi scheme going on with the Quadriga. Either way, lawyers representing exchange clients on Friday asked Canadian law enforcement officials to exhume his body and conduct an autopsy to confirm both its identity and the cause of death. The letter cited “the questionable circumstances surrounding Mr. Cotten’s death and the significant losses” suffered in the incident. The letter went on to ask that the exhumation and autopsy be completed no later than “spring of 2020, given decomposition concerns.”

It’s not clear how exhumation and autopsy would lead to the recovery of the trapped cryptocurrency, but it may clarify if Cotten’s death was real or just part of the scam.

Woah. I know. It’s just… mind-bending. World of crypto is not without criminal elements and scammers, but this really puts ‘crypt’ into ‘cryptocurrency’. What do you think? Movie-script worthy story or not?

I admit, I am a big fan of blockchain technologies in gaming. So I’d like another round of applause for AMD’s step forward. It’s true, AMD is the perpetual underdog in the world of gaming, then again, so is the entire crypto. Hungry disruptors ready to take on the incumbents. And trust me, the current state of crypto-games is just the veeeery early stage. Things we could do with tokens that span multiple games, just think of the possibilities! Cool sniper rifle you nabbed in the crypto-version of Counter-Strike turns into a fantastic new vehicle in crypto-version of Fortnite? And that’s just scratching the surface of possibilities!