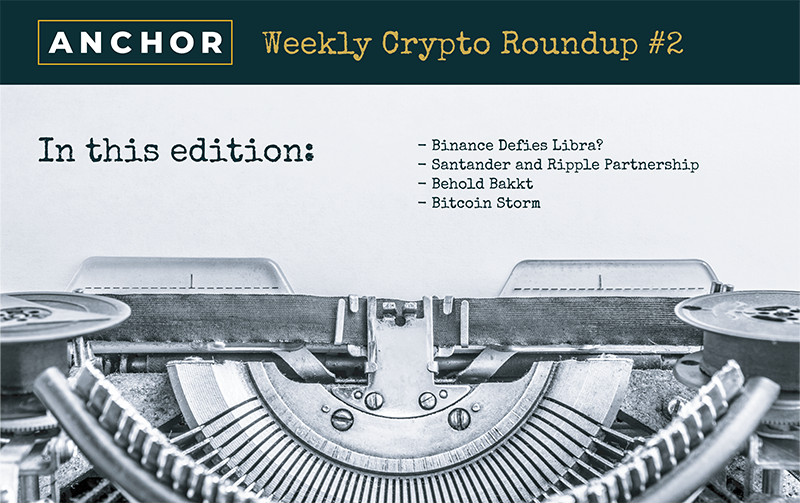 Yet another adrenaline packed week, filled with major announcements from the crypto world. This space is absolutely relentless — it’s continuously evolving, leaving us all in awe with its ever-growing use cases that are set to be ground-breaking.

Let’s dive into the most significant developments of the week.

Despite its earned triumph, glorified Binance decided not to sit back complacently. Instead they picked up the pace and managed to find themselves among the headlines once more.

Hold your horses, no scandals involved this time. As a matter of fact, Binance sets itself on a rather difficult path, in an attempt to combat and solve monetary, economic and commerce disbalance of both the developed and developing world. And how do they plan on achieving that?

To accomplish this, it would require an established affiliation with a massive number of different government bodies, as well as companies and organizations who share their vision and interests. Not to mention the fact that, as with any other stablecoin, this one too needs to be pegged to something.

The primary proposition states it would be fixed to a particular, traditional, national currency. Taking into consideration the current state of nationwide currencies and their fluctuation, I simply can’t fathom as to how they will tackle the stability issue.

Yes, Binance does bring experience to the table when it comes to stablecoins; however, it begs the question of whether they attained poise or not. I suppose all you have to do in order to draw the conclusion, is take a peek at BTCB and BGPB charts – two stablecoins issued this year, running safely on Binance Chain.

One can’t help but wonder if it is possible to reach sustainability through such an infrastructure, Binance CEO Changpeng Zhao claims there would be absolutely zero antagonism between the newly minted coin and Libra. He added their goal has shifted towards enabling and empowering those who seek to gain some sort of fiscal autonomy and he is all in for the adoption of blockchain ecosystem, not absolute domination.

In other words, Libra and Venus serve two entirely different purposes. Venus wishes to please regional markets while Libra looks to position themselves worldwide and be largely adopted global transactions.

The Spanish banking giant, Santander, has decided to plug into Ripple’s framework in order to solve remittance issues.

Allow me to remind the XRP fan army that Ripple isn’t XRP, nor will this strategic move significantly affect XRP price or boost it to its all time high for that matter, as some hope and expect.

Ripple is a software company that developed the protocol on which XRP is deployed. While the two are related, when it comes to the business model, the use of one does not stipulate the use of the other. Ripple doesn’t condition its users to use the currency they have created.

So what’s really going on behind this newly formed relationship?

Ripple Labs, the company responsible for the creation of the third largest cryptocurrency by market capitalization, has over the course of the past year made substantial technological achievements. Namely, I am referring to xRapid and xCurrent, two systems which have a particular target group — banks and financial institutions. What they promise to solve is banking inefficiencies in terms of cross-border transactions, by implementing a blockchain-based distributed payment protocol that facilitates instantaneous and low-cost transactions between various parties.

Basically, what Santander offers to its clients now, is a safe and sound money transfer between Latin America and the USA, by using their mobile app, One Pay FX, which has Ripple’s xCurrent software integrated. The only two countries that get to enjoy this privilege are Spain and the United Kingdom.

Despite the fact that Santander did not wish to reveal the exact transaction volume, according to Cedric Menager, CEO of One Pay FX, the above mentioned move has triggered traction and contributed to massive growth.

It seems that the reign of an obsolete SWIFT structure is slowly coming to an end, as new technologies emerge.

The long rumored crypto startup is finally making a move. Although many describe them as a bitcoin futures exchange, they don’t identify themselves as one. Practically they take advantage of its parent firm ICE’s existing infrastructure, hence the mix-up. What they truly offer is secure regulated custody services.

The idea was born long ago and Bakkt initially planned to start offering services back in 2018. They were forced to halt their progress for the sake of obtaining all mandatory, regulatory licenses. The challenge was to satisfy the Commodity Futures Trading Commission and to acquire a New York state trust charter from the New York State Department of Financial Services.

So what sets them apart?

The most noted feature is that it offers custody and physically-delivered daily and monthly bitcoin futures contracts. This means that it requires a holder to produce actual bitcoins, just as it requires the exchange to deliver them. For some, knowing that it is backed by the New York Stock Exchange, puts their mind at ease.

Their roadmap includes creating the tools necessary for consumers and merchants to use Bitcoin seamlessly. They are also looking to provide equal protection for bitcoin as they would for other assets such as stocks, bonds or commodities. Hopefully this will be the first step to mainstream adoption of Bitcoin.

To design their platform, Bakkt needed to build strong relations and associate themselves with multiple organizations. A couple of note-worthy names appeared on the list: Microsoft, Starbucks, Boston Consulting Group and so on. Furthermore, they partnered with major investment players in order to secure and promote bitcoin to distinct pension funds and exchange-traded funds.

Bakkt CEO Kelly Loeffler announced there would be two options available when it comes to contracts — daily and monthly. Both will be settled at the Bakkt Warehouse, a part of their New York-chartered trust company.

Many suggest that Bakkt’s announcement may further contribute to the rise in the price of bitcoin. It will be interesting to sit back and observe how the market, investors and traders react to Bakkt.

We are witnessing a slight pullback this week, as Bitcoin pierced the 10,000 threshold and dipped slightly below it. Many have speculated that the news about Bakkt being finally launched will have drastic, bullish reflection on the current BTC price, albeit that’s not the case.

Many assert that there are periods when it is fairly easy to estimate the direction in which the price will unfold, but as this is a highly volatile market, one should never get ahead of themselves but rather keep a cool head.

Let’s stay on the volatility subject for a while and examine the index.

First of all let’s compose a definition of the index, for people who are still pondering or have just entered the world of trading. Simply put, it is an indicator that depicts how likely it is for the price of a certain asset to vary over a given time interval. You may look at it from another perspective – it assists you in determining whether optimism or fear is prevailing. Therefore, a higher volatility indicates greater price oscillations, while lower the opposite.

Looking at the hashrate statistics, BTC broke another all time high this Monday. The never ending saga continues — is it hashrate that drives the price or is it the other way around.

Now, it’s true, usually whenever the hashrate increases, there is a spike in price also, but don’t draw and shoot too fast.

Fibonacci retracement points to interesting readings. Namely, if you set the chart to 1 week and draw the indicator from the very bottom of the uprising trend (starting February), you will notice that we are literally dancing around 23.6 level, hinting that we might be on the verge of a new downward tendency. All that separates the current, relatively stable scenario from taking an entirely different direction, is a single candlestick. If that happens, can we go back below 9K?

We would be delighted if you were to share your opinion in our Telegram Anchor Trading Community.