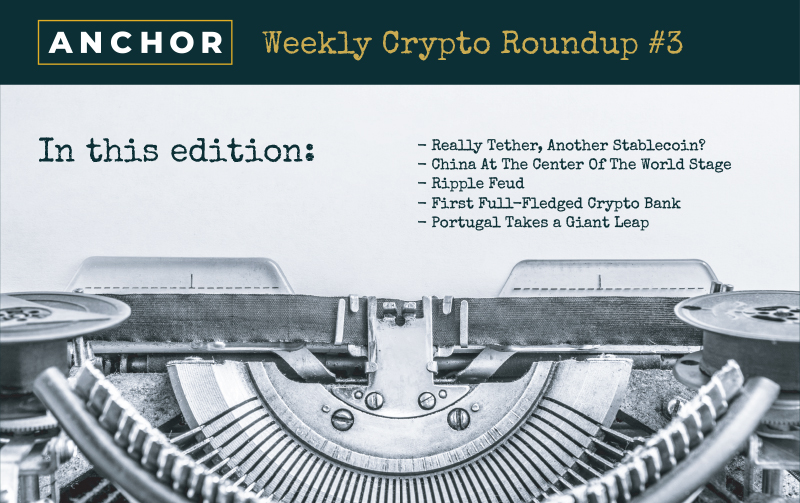 Welcome back fellow Cryptonites to a new edition of Anchor’s Crypto Roundup, where we review the latest trends and developments of the week in the crypto sphere.

Tether doesn’t cease to surprise. In the midst of the Bitfinex / Tether affair, still under investigation for accusations of mishandling a staggering 850 million dollars, comes a bold announcement of the launch of a new stablecoin, CNHT, pegged to offshore Chinese Yuan.

If you are slightly confused with the terms “offshore” and “onshore” and how one country can practically have two different currencies, here’s an elementary explanation:

China wants to maintain rigorous control over its national currency. While they imposed tight regulations over the foreign exchange market, it was still in their interest to promote the currency overseas. Thus, an offshore Yuan was born, as a need for a place in a global trade war, without disrupting the value of Mainland China’s Yuan.

So in the case of the CNY (onshore Yuan), the rates are monitored and set by the People’s Bank of China, whilst CNH (offshore Yuan), is mainly controlled by FX market factors.

Zhao Dong, a shareholder of Tether’s sister company Bitfinex, announced for ChainNews, that the new stablecoin should be launched very soon, but did not disclose an exact date.

So far we know that the reserve is expected to be in Belgium. As this is Tether’s fourth “donation”, one can wonder if this is a push to establish a firm hold over the stablecoin market.

China At The Center Of The World Stage

“China is launching its own digital currency” is what the media are blaring to the global audience. Now, is this a strategy for monetary integration with the rest of the world and definitely one for the long-term.

According to Forbes, who retrieved an intel from an unofficial source, from an unnamed bank, China will be introducing the currency on November 11th, 2019, Chinese equivalent to the Black Friday shopping holiday. In the first phase of this process, we can expect the Chinese monetary authorities to test its adoption, implementation and effect on internal economic stability.

The next step would be to go international, onboarding neighboring countries or states with which it has strong bilateral relations, most probably adding it as a layer to the Belt and Road political and economic grid they have already set up. This is a global initiative and the goal is not to remove banks as intermediaries in the global financial system, but to control the pathways of trade and transactions along their growing global economic empire.

China is building a new technical infrastructure that will free them from reliance on international standards such as SWIFT, headquartered in Belgium, and with a de facto monopoly over inter-banking transaction fees.

Not so long ago, China had a pretty hostile approach when it came to the crypto domain. The government would suppress every attempt to bring crypto regulation to the forefront.

Hence, I’m not sure if it has been the resistance and struggle of the crypto community that led to the apparent decision to introduce a national crypto currency, which has been met with very positive reactions.

Let me remind you that not so long ago, rigorous Chinese laws banned financial institutions from using Bitcoin for trading. ICOs were banned and were treated as first grade corruption, while mining was to be gradually suspended. No wonder everyone is enthusiastic about the U-turn.

China is not just a great player in the domain of crypto, but one that impacts the entire global market with its decisions and actions.

In case you’re wondering how exactly do they plan on distributing the tokens to large masses, here’s how:

The first wave is supposed to be handed out to large businesses and corporations. Paul Schulte, who previously worked as head of the China Construction Bank, stated the following companies as beneficiaries:

The idea is to disperse the currency through these entities, since they have continuous and high volume transactions with the public.

The deputy director, Mu Changchun, from the People’s Bank of China, in charge of the payments unit, stated that it took 5 long years of research to setup the proper implementation of the system.

According to Yang Dong, director of the Research Center of Finance Technology and Cyber Security at Renmin University of China, Libra could be responsible for speeding up the process: “Further testing is needed before officially launching the Chinese CBDC, gaining inspiration from the Libra.”

I have absolutely no intention of creating perplexity among the ranks, but please keep in mind that CBDC (Central Bank Digital Currency) is not a cryptocurrency. The difference between a digital currency and crypto-currency is determined by the governance model.

There’s been a lot of commotion surrounding Ripple lately. Although Ripple keeps making it to the headlines, the latest developments have spurred dissatisfaction among XRP loyal hodlers.

Their partnerships are being praised all over the news and internet, but somehow none of those shrewd business maneuvers reflected positively on the price.

The first person to express discontent publicly was none other than Crypto Bitlord, a quite influential crypto enthusiast who gave his two cents (pun intended) via Twitter.

Only a couple of days ago he reached out to his accrued followers, a 100K strong twitter army, and let his intentions be known: “I’m thinking about forking $XRP so we don’t have to deal with the founders dumping. — This will be a community effort. Retweet if you’re in.”

I’m not sure how he plans to pull this off,  since, to my understanding the Ripple Ledger is immutable to forks.

I presume the initial response must have been overwhelming because he went on to form a petition on change.org.

Little did he know that “Stop Ripple Dumping”, as the petition is called, would bring him into an unpleasant situation. Allegedly, he started receiving numerous death threats, after which Crypto Bitlord decided to retreat from the media spotlight.

Bradley Kent “Brad” Garlinghouse, CEO of financial technology company Ripple, responded to what he characterized as fear, uncertainty and doubt:

Sygnum, an independent digital asset technology group, is one of two crypto-focused banks, that was issued a conditional banking and securities dealer license by The Swiss Financial Market Supervisory Authority (FINMA), the second one being Seba Crypto AG.

Seba’s first step will be to officially launch its new trading platform in October. Their plans also include to establish a digital asset platform for traders, firms and institutional clients, as well as custody storage and asset management.

Sygnum announced that the regulatory approval will impel them to deliver its digital asset offerings to market, alongside a custody and integrated liquidity platform for major digital currencies, as soon as possible.

Sygnum officially has headquarters both in Singapore and Zurich. So it’s only a matter of time when they conclude their negotiations and seal the deal with regulators in Singapore.

Someone once said: “A tax law can imprison you in one country, but liberate you in another.”

Keep this in mind and remember that as of August 2019, Portugal is considered a perfect haven for all those involved in crypto ventures.

Both cryptocurrency trading and payments in crypto are going to be exempt from taxation in Portugal. read more about the top countries for crypto adoption our blog page.

Well, there you have it. Is recession really knocking on the door? Are cryptocurrencies here to bring salvation? Is Craig Wright Satoshi? Will BTC break through the 20K psychological threshold? Share your comments and thoughts on the Anchor Trading Community Group on Telegram >>>