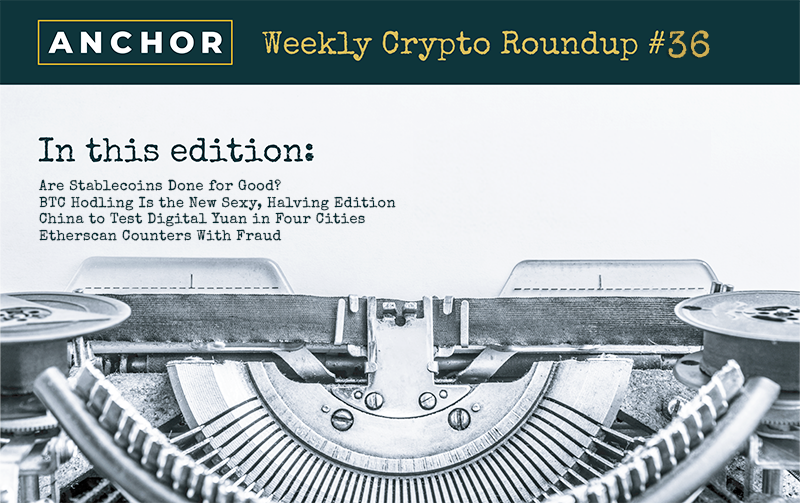 How are you doing, fellow Anchorians? I hope you enjoyed your holidays, for starters! Now, maybe I’m just a hopeless optimist but I sure believe that pretty soon we’re going to put this whole pandemic disaster behind us. Mark my words! Crypto affairs are booming and it is almost like the industry is ready to start anew. Well, that is if the recession allows us but still… a positive attitude is good for morale!

In this edition, we will focus on the events that defined the week behind us, starting with not-so-great news for stablecoins. Nonetheless, before we dive into this Roundup, I wanted to thank you for your support throughout these past few weeks, it meant a lot to the Anchor team. And since you’re still thirsty for knowledge, once again, we will break the most important crypto news just for you, guys! Fasten your seatbelts, ‘cause this 36th edition will take you for a ride!

Are Stablecoins Done for Good?

Okay, I know, maybe we shouldn’t start with a catastrophe but let’s first determine if this really is one. The Financial Stability Board (FSB) gave recommendations to central banks on how to deal with stablecoins… One of them is an outright prohibition! Major G20 economies could end stablecoins in the year ahead of us but let’s see if the situation is actually that dangerous.

The report is focused on the most popular stablecoins at the moment (USDT, USDC, TUSD, PAX, and DAI) while intentionally setting ground rules for the launch of Facebook’s Libra. Bear in mind,  if implemented, this recommendation will not only hurt stablecoins but other cryptocurrencies as well. It would directly influence the BTC market and also leave crypto enthusiasts without an efficient hedging mechanism against traditional cryptocurrencies’ price volatility.

After the legislative pressure from the US, it seems that harsh regulation on stablecoins is a new global trend. In the eyes of sovereign countries, any currency that is not state-issued poses a threat to the national economy. CBDCs were the first response to the private companies’ emerging interest in currency issuance; heavy regulation seems to be the second, and perhaps final.

Before you hit the panic button, know that the FSB is not an executive body and this entire report has only consultative power. Still, it doesn’t mean that central banks won’t obey.

“Relevant authorities should, where necessary, clarify regulatory powers and address potential gaps in their domestic frameworks to adequately address risks posed by global stablecoins,” the FSB stated.  We have to admit – it doesn’t exactly sound like the doomsday, right? It feels more like your parents decided you’re grounded for a long time, you’re just unsure why.

If you’re asking the official bodies, Libra gave stablecoins a bad name. Let’s be realistic, governments worldwide are aware of what would happen to national fiat currencies if people suddenly decided to use a private company-issued currency. And since everybody’s already on Facebook, the usage would be incredibly easy, even for not so tech-savvy people.

Naturally, Libra’s the FSB’s ‘most wanted’ and other stablecoins, even the ones with the biggest market capitalization, are not much of a threat. Central banks could actually leave them be, at least at this moment. I bet you’re wondering what happens next and what will be the industry’s response to this hurdle. Rest assured, fellow Anchorians, we will keep you posted!

Crypto enthusiasts, you know well that BTC halving is just around the corner, and it’s happening in 20-or-so days. This occurrence brings a certain level of mystery when it comes to the future of BTC price, even though we can speculate on that (in vain). So, are people hodling or selling these days?

Blockchain intelligence firm Glassnode conducted research regarding this matter and came to the conclusion that there is a significant increase in hodling since the exchange balances are in notable decline. Logically, most of the people who have invested in Bitcoin so far expect a bullish trend in price after May halving. The logic behind this is simple – if there are fewer BTCs on the market, their price will inevitably go up.

Clearly, not everyone is hyped about the halving and some crypto experts such as Jason Williams stated that this event will have no influence on the BTC price. What do you think? One thing is certain – trading rests on the psychological factor though it’s not strictly defined by it.

Coronavirus successfully tore down many markets, and cryptocurrencies couldn’t avoid taking a punch either. Since the pandemic started, BTC price fell below $5k at one point and was shortly on a rollercoaster ride. Taking all these external factors into account, this halving may not have the same impact as it would if everything stayed ‘normal’. These are extraordinary times so nobody can guarantee anything. Hodling remains the safest option, at least for now.

Long time no see, digital yuan! This project had a kind of a domino effect on other sovereign countries which later decided to focus on their own digital currency projects. So, it’s only fair to give you updates concerning the current situation in China!

According to Ling Zhang, a Binance executive, a pilot version of a hot wallet for digital yuan is now available for download in four cities in this Asian country – Shenzhen, Chengdu, Suzhou, and Xiongan. The last one is a new ‘smart city’ in China that will be the host of big data facilities and 5G network, among other projects. Earlier this week, Zhang shared screenshots of the app on Twitter.

The world may be on lockdown but China is determined to continue with its CBDC project! Will this occurrence give them the necessary advantage to other major economies considering the launch of national digital currency? Unlike some other ‘first-world’ countries, China has definitely shown a strong willingness to put this idea into reality. Only time will tell if they would succeed in this endeavor.

CZ also commented on this news saying China definitely has ‘execution speed’ when it comes to its central bank-issued currency project. We can only observe if this acceleration from the far East will have a significant impact on western economies since, at the moment, they seem to have bigger priorities.

I don’t know about you but hearing about a crypto scam always makes me angry! Smearing the name of the cryptocurrency industry should bear consequences and Etherscan may have come up with the right idea for fraud monitoring. Hear, hear!

This well-known Ethereum block explorer launched a machine-learning surveillance engine to bust wallets connected to illicit activity. These wallets will later be ‘blacklisted’ so users can transparently see if their ETHs come from a ‘phishy’ place. This seems to be an important step towards the legitimization of crypto!

The fraud-countering system will be called ETHProtect and it will generate reports on a daily basis for its users, collecting data in real-time. According to their blog post, the system will focus on phishing, hacks, scams, and suspicious fraudulent activities.

The reason why the launch of ETHProtect is necessary was also clearly stated in the article: ‘’With an increasing number of scams, hacks and fraudulent activities, we aim to identify potential tainted addresses and to make available this information to all our end users. While taint tracing itself is not new and commonly used by large commercial organizations such as crypto exchanges and providers, services like these can cost thousands of dollars upwards per month and are normally not within the reach of the common end-user or open source project.’’

With the exception of the stablecoins-related news at the beginning, the rest of this Roundup wasn’t that gloomy, don’t you think? The industry is back on track, crypto enthusiasts, and I expect that the weeks ahead of us will bring more breaking news and you know well who will sum them up for you!

For now, stay home and be safe! Remember, everything passes and soon we’ll ride out of this storm, too. Until next week, I wish you fair winds and the following seas, fellow Anchorians!