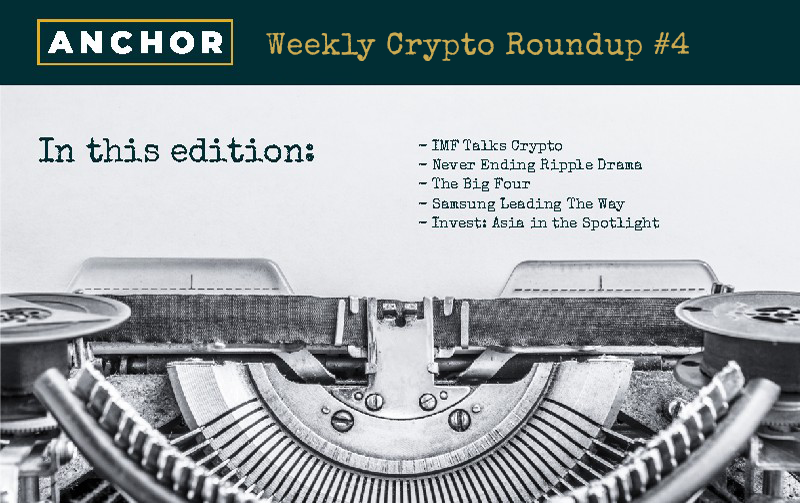 A feeling of uncertainty, fear and doubt has marked the past week as the price of BTC took another dip, dragging the rest of altcoins along. The 10K line still seems to be a safe harbor for Bitcoin for several months now, regardless of positive or negative projections.

Before we move on to the rest of the news that highlighted the week, let us first remind you of Invest:Asia 2019, Singapore – the place to be for blockchain, crypto and fintech.

What makes the event even more special is we at Anchor are officially celebrating our launch at our own event headlined #AnchoredInAsia.

If you’re in Singapore on September 12 and you’d like to network with the cream of the crop in fintech, digital payment solutions, crypto brokers, traders and exchanges and a variety of companies in the rapidly proliferating blockchain niche – be there or be square!

Apply for a complimentary ticket and enjoy our high profile networking event, capped with a discussion panel on the future of crypto and our own keynote and roadmap presentation.

Does the name ring a bell? It should. She’s at the helm of the International Monetary Fund (IMF), but she’s also a candidate for the president of the European Central Bank (ECB). If you have followed her career by any chance, you would have noticed that she has a positive outlook on this whole crypto deal. Based on everything she has said in public so far on the topic of crypto, we could safely call her a crypto-advocate.
Mrs. Lagarde has suggested that central banks and financial bodies shouldn’t fear change, but rather be open to innovations, while fintech should be encouraged, not impeded.

In her interview with CNN, she claimed that regulation is inevitable and that the IMF strives towards an infrastructure that will prevent money laundering and illicit activities.
Let’s not get ahead of ourselves though…

It is certainly a huge step forward seeing high-profile representatives of the international banking sector acknowledge and embrace the incredible benefits of blockchain technology and cryptocurrencies.
It is especially important that Mrs. Lagarde has put emphasis on the importance of serving and protecting consumers.
Let’s wait and see what the future holds.

As for Mrs. Lagarde, she gave her word that she would invest herself into making sure that financial institutions would adapt to the rapidly changing environment brought upon by blockchain and crypto, if she were to be elected next ECB president.
Let’s hope we’ll have a chance to hold her to her word.

Week after week, Ripple seems to be making it into our Crypto Roundup. Whale Alert, a website that monitors transactions on exchanges and wallets, noticed on Tuesday a conspicuous event on their platform.

Namely, according to Whale Alert, a large sum of XRP funds, 500 million tokens or 130 million dollars to be precise, have been withdrawn from the company’s escrow wallet and sent to another address that also belongs to the firm.

This isn’t the first time Ripple has been blamed by the community for activities that don’t directly benefit the holders of their cryptocurrency. This latest piece of news may only further provoke the XRP society and challenge their trust, which inadvertently affects a token’s price.

Let’s see what Ripple’s management has to say in response.

There are some bright news coming from Ripple as well, as they are reinforcing the team with Ron Hammond, who is the new manager of government relations.

Hammond was among the people who worked on the Token Taxonomy Act, the bill that excluded cryptocurrencies from being categorized as securities. As a former legislative assistant, he is a perfect match to strengthen Ripple’s government relations.

And that’s not all. Susan Friedman, former senior advisor to the assistant secretary for international markets of the U.S. Treasury Department, is joining the company’s legal team, with a responsibility to bolster healthy relationships with regulators across the globe.

One thing Ripple might need to focus on is brand communications and messaging. Although introducing new high-profile hires will further evolve their business at a strategic level, Ripple might want to tackle the issue of perception and messaging that is currently confusing the XRP community. XRP holders still find it hard to discern between Ripple the fintech product company, and XRP cryptocurrency.

We’ve already talked about the key differences between XRP and Ripple on our blog, but let’s consolidate our knowledge through repetition. The funds accrued by Ripple through investment and partnerships are used to broaden the use case in the domain of fintech solutions, as well as their business model in general, not to benefit the XRP holder.

Some time ago, the four largest accounting firms in the world decided not to miss out on the opportunity to catch they early train on the blockchain express.

While some delved into research and experimentation, others were practical about it from the get go.

They first embarked on a hiring spree, seeking professionals from the crypto industry in order to better grasp the implementation process as well as potential utilization. One thing led to another and in 2018 EY and PwC reported they would be launching blockchain auditing tools in the future.

Back then they all more or less stated that they weren’t willing to bet on any cryptocurrency, but were aware of the numerous benefits blockchain technology had to offer.

Fast forward to 2019, it appears their position has somewhat changed. Namely, a Luxembourg based subsidiary of PwC is about to start accepting payments in Bitcoin.

Although they were reluctant to comment their partnership with a local exchange, they did acknowledge that the road ahead was a challenging one.

Surely it’s only a matter of time when other players in the financial auditing niche will recognize the perks of widening their clientele to blockchain companies.

What we can expect to see in the near future is a new age of accounting, leveraging the transparency and decentralized nature of the blockchain ledger.

Among the few mobile phone manufacturers who have recognized the power of blockchain technology and cryptocurrencies, Samsung seems determined to take the lead.

The company released a blockchain cell phone model back in March, Galaxy S10, that features cryptocurrency storage initially compatible with Ethereum based tokens.

This initial teaser was designed to feel out the market and determine whether the feedback would validate further development.

A couple of months ago, Samsung also launched a software development kit for dApps and blockchain. And now we finally hear that Kakao’s native coin is being incorporated into Samsung’s new Galaxy Note 10, marketed as the “Klaytn Phone”.

For those who have never heard of Kakao, it’s suffice to say that they are a South Korean internet messaging giant. Not only will your new mobile come in with preloaded coins, but it will also be packing a crypto wallet for your own convenience. And that’s not all… They’ve also added support for Bitcoin.
Samsung Electronics Co. stated that it wanted to target an audience that was still new to crypto and blockchain, with the aim to raise awareness and boost adoption.
The service will only be available to customers in Canada, Germany, South Korea, Spain, Switzerland, the US, and the UK.
The new blockchain cell phone hype could crank up their sales numbers in the upcoming period and make up for some of the lost space in the mobile tech category.

That’s it for this week. Don’t forget to register for #AnchoredInAsia on September 12 in Singapore if you are in town for Invest: Asia 2019 or any other business (or pleasure).