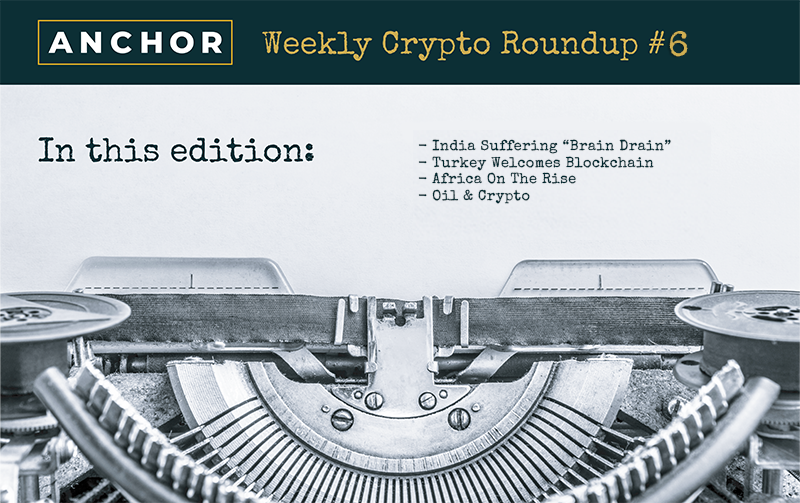 It’s Friday! You know what that means, right? Make yourself comfortable and dig into the latest Weekly Crypto Roundup.

Whether you are fresh to the crypto scape and want to pick up some knowledge, or a pundit following the latest news, or someone looking to improve investment strategies based on fundamental analysis, we’ve got you covered.

We recently wrote about which countries are best positioned for the use of cryptocurrencies and how it would impact their economies. Now we are going to show what the consequences could be like when a government disputes the merits of blockchain technology and bans cryptocurrencies.

India, a country that produces top notch programmers and tends to not just keep up with the latest tech trends, but also create them, has decided to shake down the crypto tree.

Some of you might remember that back in 2017 the Reserve Bank of India (RBI) considered introducing a proposal for a national cryptocurrency. Had the project not died in its infancy stage, the digital token would’ve been called Lakshmi – after the goddess of wealth.

Fast forward to 2019 and things are going in an entirely opposite direction.

Namely, the Indian government has tabled a bill that has caused tremors in the Indian crypto community. It is titled “Banning of Cryptocurrency and Regulation of Official Digital Currency Bill 2019”. Basically, it stipulates that anyone mining a particular cryptocurrency, generating, holding, purchasing, selling, transferring or trading, will risk facing 10 years of imprisonment. Bear in mind this is higher than the maximum sentence of 7 years for money laundering.

Jaideep Reddy, an eminent technology advocate from India, says there is no need for panic as this is merely a recommendation by a committee, not a binding decision. He added that the committee did not incorporate technical staff, which is an important element in the whole affair.

So, what will happen if the bill does go through and takes effect?

It’s no surprise that some companies and exchanges are already packing their suitcases. One such startup stated: “As a startup from India, we always wanted to operate from India, but this recent complication has made it difficult for domestic cryptocurrency exchanges to operate their businesses in India. So, we are now an Estonia-based company, and any Indian law to criminalize crypto will not impact us.”

I suppose one person’s loss is another one’s gain. According to some estimates, 5 million Indian citizens own some form of cryptocurrency and there are many more who are involved in crypto at some level.

If you thought that banks or any licensed, financial entities have been exempted from the stipulations of the bill, think twice. Literally everybody is prohibited from using crypto instruments in any way.

This is a direct violation of Article 21 of the Constitution of India, the right to engage in a profession of choice, and there are already initiatives to challenge the proposed bill before the Supreme Court. Let’s see how that turns out.

The current market cap of all cryptocurrencies is roughly 272 billion dollars at the moment. What slice of this cake will India be missing out on, then?

There is rumour and anxiety that could always catch on and spread like an epidemic, enticing a large portion of intellectuals to flee in order to save their funds, which is definitely a better option than living your life behind the bars. If this should happen, they will take with them all the innovation, creativity, and entrepreneurial spirit embodied in their professions and companies.

Wise up India, or suffer the consequences.

On the 18th of September, The Ministry of Industry and Technology held a presentation in Ankara where they laid out their future plans and strategies for the years to come. One of the main items on the agenda? You guessed it – blockchain and its implementation.

It’s wasn’t just another item on the agenda either. The conclusion was that the deployment of distributed ledger technology in Turkey was an absolute priority.

The official document called “Strategy 2023”, issued by the government, produced a unique definition of blockchain technology and it goes like this:

“Blockchain, which became popular with virtual currencies like Bitcoin, delivers a distributed communication infrastructure to provide trust between parties on transactions without the need for a central authority. This feature enables many different use cases that address transparency and reliability issues, from smart contracts to supply chains. Because it removes any intermediaries, blockchain technology builds new business models that will shape the future.”

The Ministry stated it would work closely with the regulators to ensure the implementation of proper security mechanisms. They have already taken into consideration a wide number of use cases ranging from academic certificates to registration of property, however the opportunities are limitless, as we all know.

The Turkish government is evidently more than passionate about boarding the crypto train and potentially becoming a leader in the region, as they established The Istanbul Blockchain and Innovation Center (BlockchainIST Center), inaugurated at Bahcesehir University (BAU). Mr. Bora Erdamar, appointed director of the center, declared that Turkey must embrace the technology that is set to transform humanity.

Takasbank, the second largest bank in Turkey, recently announced they were working on a project that would soon offer the opportunity to trade real gold on a blockchain platform.

How’s that for Turkish delight!

Africa On The Rise

While many consider the World’s second largest continent not progressive enough, Africa is in effect very blockchain-oriented and motivated to encourage mass adoption. There is strong motivation to take advantage of tech to drive change and challenge pressing developmental issues. Kenya and Nigeria are setting the pace.

The Nigeria Union of Road Transport Workers (NURTW) has already partnered with the private sector to construct a blockchain project that aims to improve interstate road transportation. The program aims to improve safety, record keeping and insurance for road travelers. Wondering how they are planning to pull this off? Well, here are some details.

The nation’s highway system is in pretty bad shape, and that’s almost an understatement. There are, however, other aspects of traveling by road that are not to be taken lightly or neglected. Travelers involved in traffic accidents are experiencing hardships when it comes to receiving medical care. Hospitals are regularly refusing to admit victims or patients due to a lack of proper identification and insurance documents.

Let’s not forget that highway kidnapping is also an issue in Nigeria, as well as in many other countries of the continent and police forces have a difficult time locating the next-of-kin in these cases, where every minute is crucial in recovering the victim from captivity.

The solution? Blackblock, in collaboration with Universal Insurance and the NURTW, has devised a system to improve PAM (passenger manifest system) using blockchain technology.

The partnership hopes to achieve absolute digitization of the PAM system, so that accurate passenger information is at disposal at any time. The plan is to shift from the obsolete paper manifest controlled by travel operators with a fully digital system that would safeguard record keeping.

OK, but what about Kenya?

Well, Kenya is pursuing blockchain adoption primarily through plans to create a national digital currency. Since 2018, numerous reports have emerged that show the government is looking to enact regulations for cryptocurrency and blockchain technology in the country.

Now here’s something rather unprecedented. Allegedly, Kenya’s central bank has already stated expressed interest in drafting laws to govern initial coin offerings in the country.
Another interesting fact is that the Central Bank of Kenya has, just like France and Germany, warned about the potential threat of Libra on the national economy.

The recent assault on the largest oil processing plant in the world has left Saudi oil fields in havoc. The news of the Saudi Aramco drone attack has sent shockwaves throughout the oil market.

The event immediately triggered a spike in the price of oil, as traders have witnessed a rise of 15 percent in a matter of minutes on Monday.

Was this once in a lifetime opportunity for traders? Did you catch the signal?

Bitcoin, which is often advertised as virtual gold, will be put to the test of endurance to prove itself.

The ripple effect resulted in a decrease in crude oil production of 5.7 million barrels per day, 5% of the world’s daily output.

I couldn’t help but notice some degree of indifference in response to the sudden attacks on the world’s oil supply.

Gold futures spiked on news of the drone attacks, however, the word did not spread around as it was faintly 1% increase.

Oil futures rose more dramatically, which is not surprising given Saudi Arabia’s significance to the global oil supply.

Bitcoin CME futures also rose, but gently basically. The rise was correlated with the rise in gold futures, and should not be perceived as a long-term trend.

One way to look at these indicators is that no one is panicking over the Saudi Arabia attacks yet. The bitcoin-gold narrative is strengthened here, as the muted responses show no substantial switch in the perception of geopolitical danger among investors.

While the US and Saudi Arabia are pointing fingers at Iran, the latter has strongly denied any involvement, as sabers are rattling on both ends.

The attack came with the feud between the United States of America and China, over Iranian oil as a backdrop. The United States decided to impose sanctions on Iran, accusing the

China did not comply and went on to purchase 300 million dollars worth of crude.

Although the ambush on the oil factory has been described as sophisticated, involving around 20 drones, after turning to forensic science and thoroughly examining the evidence, the U.S. administration stopped pointing fingers at Iran.

Cryptocurrencies have faced recessionary fears from a no-deal Brexit period, but they are yet to face a real geopolitical crisis. Well, the pan certainly seems to be heating up of late.

Bitcoin has been stable to some degree, meandering around 10 000, but how will the Saudi Arabia oil attack and ensuing affect it?

Even though crypto maximalists claim that cryptocurrencies are resilient and resistant to major economic and geopolitical happenings, we are yet to see real proof of that. Military action and a more intense stand-off between global and regional powers in the Gulf that could possibly spread to the Middle East, could put that resilience to the test.

There is a theory that maybe the bitcoin investors are watching Finance futures and the launch of Bakkt, which they regard more as a speculative commodity than a gold-like hedge against uncertainty.

If the political stakeholders in this nascent conflict should pick a course of action that would further exacerbate the oil crisis, BTC and the crypto world will find itself at a new point and we will finally get to see how “bullet proof” Bitcoin really is – will investors choose to trust their holdings with BTC, and possibly a portfolio of a couple of more cryptocurrencies, or are we going to see a new bear run with investors exiting into more traditional assets they will feel more secure with.

That’s it for this week. Starting with the next edition of the Crypto Roundup, I invite you to send your own insights and news you have dug up in the crypto, blockchain and financial sphere and I’ll include the juicy ones with full credits. Send your thoughts, insights and news to editor@theanchor.io