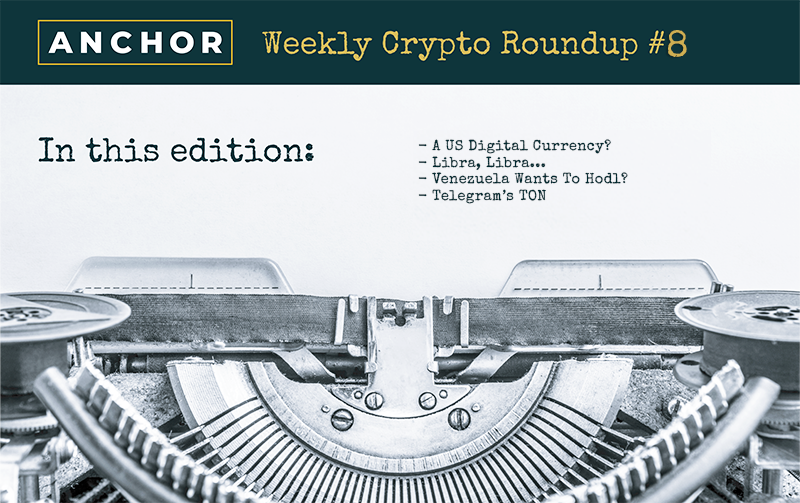 A week after the shocking BTC price drop, we are still collecting our thoughts and trying to figure out if it was a momentary chill or whether we are in for a longer spell of cold weather. Although we welcomed the partial price recovery on Monday, we are still lingering in a zone of suspense. Traders are seeing flat movement while the fear and greed index needle points to 37, which is basically a signal for selling. Tech billionaire Mark Cuban stated that he’d rather have bananas in his portfolio than Bitcoin. On the other hand, German bank BayernLB predicts that BTC could skyrocket to 90K in 2020.

We cannot know which prediction will pan out, but what’s certain is that approximately 25 000 stores in France will begin accepting Bitcoin as a means of payment, starting 2020.

BTC aside, let’s see what other news we’ve had this week in cryptoland.

A US Digital Currency?

Is that what we’re seeing here?

In a letter to Federal Reserve Board Chairman Jerome Powell, which I urge you all to read with care, US Congressmen French Hill and Bill Foster are calling for a public debate on whether or not the Federal Reserve should launch their own digital currency, bearing in mind that we are apparently witnessing an irreversible trend in the global march of a new monetary and economic paradigm.

Some U.S. government representatives, on the other hand, fear that the rise of digital currencies may place the U.S. dollar in an awkward position. Should it face off with a state-backed digital currency, its core strength would be tested and who knows what kind of repercussions this would have for the US economy, monetary policy and the complex web of global government and corporate relations that are marshaled by the U.S. dollar.

Simon Potter, a former Federal Reserve official, stated that he was under the impression that making such a radical move wouldn’t make much sense and that it might only hurt the dollar. He also believes that Central Banks would probably never agree to take this path, unlike the private sector, whose business logic compels them to sell products, rather than worry about the outcomes of monetary policy decisions, .

Mark Zuckerberg has reiterated that the Libra project is concerned about its impact on society and that the launch date was nowhere close to being known, as the project had to work through the complex regulatory challenges it was facing. During a visit to Washington, where he enjoyed dinner with a number of United States lawmakers, he vouched that the project was not to be set in motion without the necessary approvals.

However, Libra is already running on a testnet, with claims that technical challenges need to be dealt with and streamlined prior to reaching the mainnet phase. The new roadmap says that launching the Testnet has allowed the team to quickly improve Libra Core by making it easy to troubleshoot, diagnose, and resolve software edge cases. The Testnet is meant to demonstrate the Libra network’s functionality and provide early access to developers. Following the Testnet, the project expects to have a successful launch of the Libra Mainnet.

We’ve already seen David Marcus, head of Calibra wallet, facing a barrage of hard questions in front of Congress and now it’s apparently Sheryl Sandberg’s turn to take flak. She will make her appearance in front of the House of Financial Services Committee in order to testify on Libra.

As the social network’s chief operating officer, she will be discussing global market power, as well as the potential launch date.

Sandberg was previously confronted by the Senate Intelligence Committee concerning data privacy, security matters and the U.S. presidential election-related campaigns on Facebook back in 2016. She will probably draw on that experience to shape her expose in front of Congress.

While some might think that Facebook will pull the Libra project off and stand the test of regulatory scrutiny, others believe that the whole project is out of their hands.

The Libra project was designed as an alliance of a number of powerful companies. Facebook is just a single entity within that organization, sharing decision-making power with the rest of the membership, which they have pointed out on several occasions to date.

CNN reported that “Facebook’s billions of users will make Libra the most widely used cryptocurrency and could make it big enough to rival government-backed currencies like the dollar, potentially threatening the stability of traditional financial systems.”

We are in for a massive face-off between the conflicting concepts of state regulations and corporate laissez faire, over the future of the Libra project. Grab some popcorn 🙂

They are currently running internal tests to determine whether or not it can be successfully executed and feasible.

Cryptocurrency custody is a very important matter for a central bank. Prudent steps need to be taken in order to make sure that no random official with dubious intentions or any unauthorized entity can unilaterally gain access to wallets.

This bold initiative has a rather interesting background. Basically, it was a request of the state-run oil and gas company in Venezuela, Petróleos de Venezuela SA (PSDV). They asked the Venezuelan Central Bank to look into Bitcoin options after the oil producer met with difficulties relating to receiving payments from international clients due to US sanctions.

While nobody knows for sure how exactly PSDV came to hodl large amounts of crypto, there have been unconfirmed rumors that they’ve been accepting BTC and ETH from an unknown international client in exchange for oil.

PSDV is currently looking to transfer BTC and ETH to the Venezuelan Central Bank and then have the state institution pay its suppliers out in crypto currency.

This could turn out to be the largest lifehack in history. At least until Iran catches on.

If Venezuela manages to circumvent US-imposed sanctions through Bitcoin and Ethereum, how will this impact their policy towards the legality of Bitcoin and crypto in general, in national and international transactions and trade.

While Venezuela may end up being the first country to publicly trade oil for crypto, we shouldn’t forget that countries like Russia and Iran have already discussed this possibility in the past. Both countries are increasingly Bitcoin friendly of late.

Could you imagine if Russia, Venezuela and Iran started trading oil for Bitcoin?

The magnitude and implications that might have on the global economy for the US dollar and the price of Bitcoin.

What sort of impact would that have if countries were to start paying for oil in BTC as a standard practice?

This leads to even greater questions – where would all this end and what other countries would start following the trend?

Get two bags of popcorn, just in case.

Last month, Telegram released the TON testnet explorer and a software for its node, followed by an announcement of the alpha version of its Gram token wallet for iOS.  After months of planning, the messaging service has announced it will launch its long-awaited Telegram Open Network (TON) in late October.

Investors, including venture capital companies from Silicon Valley, will finally get to see what the 1.7 billion dollars pot will bring to the table and how will it perform.

They will be provided with TON key generation software and will be required to provide Telegram with a public key to receive their Gram (GRM) tokens — the platform’s native token — by October 16th.

What most people have been wondering is how come there is no mention of regulatory concerns and governance related to this project.

Pavel Durov, the brain behind the enterprise, has already had success with other social networks. He was the founder of VKontakte, a platform that took Russia by storm. Unfortunately, at some point he was forced to sell it off and flee the country as he made enemies within the government itself.

While many perceived this move as a direct rivalry to Facebook’s Libra, the fact of the matter is that the two players are not referring much to each other in public statements. Does this mean they will simply coexist in the global market, or is a major confrontation lying in wait?

What’s interesting here is that Libra will be backed by a basket of currencies, while Gram will have no backing whatsoever, just like Bitcoin in its inception.

TON will introduce some cool features, one of them being compatibility with the Ethereum platform and its smart contracts.

When it comes to crypto projects, something that a lot of tech savvy people out there pay close attention to is the actual source code. Well, the good news is that it’s officially available on Github.

In an effort to attract developers and encourage them contribute to the vision of the company, Telegram announced a coding competition for building smart contracts on TON. Contestants will compete for rewards from a pot containing between USD 200,000 and 400,000.

Hopefully this week’s edition will not leave you indifferent. Use the information provided to make wise movements and always accept insiders’ tips with a grain of salt. The marketplace can be harsh and unforgiving battlefield to those who are not on the alert. Until next week, cruise safely in the vast crypto.