UNICEF in Crypto, Another Round with Tether and Bitfinex, Three Strikes in Brazil 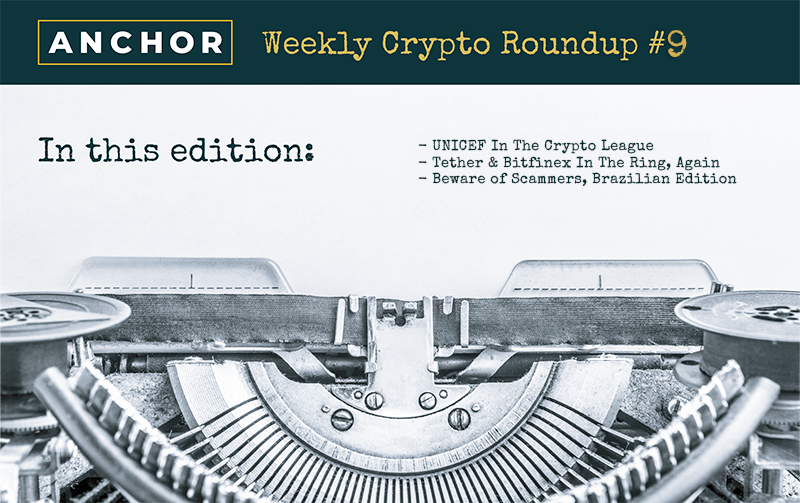 The cryptoland, playground for adults regardless of ethnicity, gender, age or background. The realm which welcomes everyone with arms open. It is true that many have ended up being burned, but there’s an equally massive bunch of those who wallow in the spoils of their patience, dedication and resolve.

There’s no denying that this field is packed with numerous traps. But truth be told, what isn’t in life. There are risks lurking around every corner and by choosing the right ones to take, we can end up in a state of bliss.

We can’t fight the inevitable march of technological progress fueled by innovation. Despite all the ups and downs, we need to remain open-minded and look out for signs along the road guide us to destinations that are just ours.

So, let’s see what developments have been most deserving of our attention this week and make the cut for Anchor’s Weekly Crypto Roundup.

UNICEF In The Crypto League

“If digital economies and currencies have the potential to shape the lives of coming generations, it is important that we explore the opportunities they offer. That’s why the creation of our Cryptocurrency Fund is a significant and welcome step forward in humanitarian and development work.”

A couple of days ago, these words were spoken by Henrietta H. Fore when she announced that the UN’s agency for children created a cryptocurrency fund that will begin accepting, holding and disbursing donations in bitcoins and ethers.

Fore added that she considered this decision to be a substantial step in development work.

Ethereum Foundation was quick to praise her public statement, putting crypto where their mouth was and contributing 100 ETH, approximately USD 18 000 at the time of writing, through the French National Committee.

It’s good to note that their national chambers located in USA, Australia and New Zealand will be also accepting crypto.

The first projects to partake in this endeavor will be Prescrypto, Atix Labs and Utopixar. These are all blockchain start-ups selected in December 2018 to receive USD 100,000 grants from UNICEF. They job will be to improve this vast sector and help the proliferation of new ideas in the following industries: prescription tracking, matching investors with those in need of funding, and social engagement priorities with the assistance of community tokens.

But keep in mind that UNICEF isn’t the first humanitarian organization to board the crypto train. Yes, it’s true that the blockchain industry fosters an endless stream of opportunities for many, but this is not an unprecedented move. As a matter of fact, a number of aid agencies have already begun accepting charity in a form of digital coins, among them the American Red Cross and the UN World Food Programme.

Last year for instance, UNICEF Australia introduced a cryptocurrency mining script which allows donors to donate their CPU power and mine Monero on their behalf upon visiting their website – The Hope Page.

Due to the volatility which market continuously exhibits, most of the initial bestowals will be dealt with short term, in order to reduce risk.

Christopher Fabian, who is a principal adviser at UNICEF Innovation, emphasized that some kinds of safeguards had to be embedded into the existing system.

So far it appears there is no intention to use the crypto basket for trading.

An issue that remains to be addressed is how exactly does UNICEF, as well as other similar institutions, plan to handle the bankroll long term should cryptocurrencies suddenly go through a devaluation phase.

One approach would be to reduce risk by hedging with stablecoins.

Tether & Bitfinex In The Ring, Again

It looks as if both Tether and Bitfinex are putting on their boxing gloves, but are sharing the same corner.

Just when they might have thought that they were off the hook, they’ve been served with a new lawsuit.

This time, the allegations indicate massive market manipulation, adding up to over USD 1 trillion. Nope, that’s definitely not a typo.

Do you remember the recent federal case against Craig Wright? The one that ended up costing him billions of dollars?

The same tandem of lawyers who prosecuted Mr. Craig, have teamed up to hound the two crypto giants.

Vel Freedman and Kyle Roche filed a suit on Sunday, 6th of October, on the grounds of defrauding investors and concealing true numbers.

Mr. Kyle Roche publicly accused Tether and Bitfinex of evoking one of the largest bubbles in the history of mankind, through his tweet a few days ago.

In an enclosed document, phrases such as “sophisticated scheme” and “part-fraud, part-pump-and-dump, and part-money laundering” can be found.

The legal tandem further asserted that the previous charges made by the New York General Attorney’s Office were indeed correct and that at the time USDT was not backed by USD in a 1:1 proportion.

As the tale unravels, we learn that allegedly some USDTs were minted out of thin air and had no endorsement whatsoever. To turn this whole story into a drama or a nightmare for some, it turns out that the unbacked tokens were used for purchasing large amounts of BTC during 2017, thus inflating the ecosystem and consequently busting it.

Of course, both defendants acted promptly in a response to the indictment.

“These baseless accusations are an attempt to undermine the growth and success of the entire digital token community, of which Bitfinex and Tether are key parts. It is an attack on the work and dedication of not just Bitfinex’s stakeholders, but thousands of our colleagues, too.”

“All Tether tokens are fully backed by reserves and are issued pursuant to market demand, and not for the purpose of controlling the pricing of crypto assets. It is irresponsible to suggest that Tether enables illicit activity due to its efficiency, liquidity and wide-scale applicability within the cryptocurrency ecosystem.”

Although nobody really knows how things are going to play out in this round, there is a lot of concern among most stakeholders in crypto. Should these two behemoths lose the case, it may have unprecedented, detrimental effects on the entire market.

One of the questions that arises is what is going to happen with the funds? Are they going to get confiscated?

If so, it could easily have negative repercussions for many other cryptocurrencies. We could witness a huge flush out. In spite of everyone being aware of their murky history, a lot of people are rooting for them to come out as winners, for the sake of not creating large scale upheabal in the market.

Their market caps combined are not something that should be neglected or looked upon lightly. On the other hand, if we hope to continue in the right, decentralized direction, in the event that the accusations are proven to be true, justice will have to be served for the sake of the long-term health and prosperity of the crypto industry, regardless of the short-term cost.

The crypto community is genuinely tired of the uninformed scrutiny coming from the mainstream that keeps associating every mention of the word crypto to the idea of murky business and criminal activity.

Cryptocurrencies and blockchain technology are proving themselves beyond doubt with every new use case, and some of the bolder players in the mainstream have realised their potential, as we have seen in the case of UNICEF’s initiative we covered in this issue of the Roundup.

With this in mind, we have to point out that there will always be people who will try to make a quick buck at the expense of the gullible, naïve and uninformed.

But let’s stop pretending that these things happen only in our line of business. You will find frauds and scammers in every industry and niche, and the best way to combat them is by spreading education and awareness.

Brazil is a country that’s been targeted heavily lately and the latest example is an order issued by the Sao Paulo Court to restrict the assets of Unick Forex.

Apparently, Unick Forex has already fled the offices, making sure no digital footprint is left behind. According to the police investigation, the staff managed to remove all the computers and hardware. By the time this whole incident was reported and the police arrived at the scene, the offices were already rented out to someone else.

This story has a peculiar development…

Leidimar Lopes, who is the head of Unick Forex, published a report in which he outlines that the company plans to continue to operate as usual. The CEO stated that all customers will be remunerated.

Mr. Lopes stressed that Unick Forex is not to be considered as a platform for investing, but served for educational purposes.

Unick Forex has already lost one case and was ordered to settle the fine. A client of theirs complained about the intolerable delays in terms of withdrawals and decided to take matters into his own hands, by pressing charges. There is still no information whether he received his USD 28,500.

Another investigation is in the pipelines.

YouXWallet has been accused of running a crypto pyramid scheme on the territory of Brazil and Portugal. Although this FX and crypto exchange is based in Estonia, they are facing charges of deceiving their clientele by promising a 400% return on investment.

YouXWallet is already under examination by the Securities and Exchange Commission of Brazil.

Many voices in the crypto community warned that the multi-level marketing operation was obvious at first sight.

Grupo Bitcoin Banco (GBB), a Brazilian cryptocurrency firm, was also accused of running a hoax involving 25,000 Bitcoin, worth around USD 196 million at the time of writing.

What conclusions can we draw from this string of unfortunate events?

Some people are using crypto as a tool for building a better tomorrow, while others employ duplicitous techniques to extort money from people who trusted them with their fortunes.

The takeaway is that the good old maxim, “knowledge is power”, is in fact the gold standard.

Until next week, stay well and informed our fellow Anchorians.