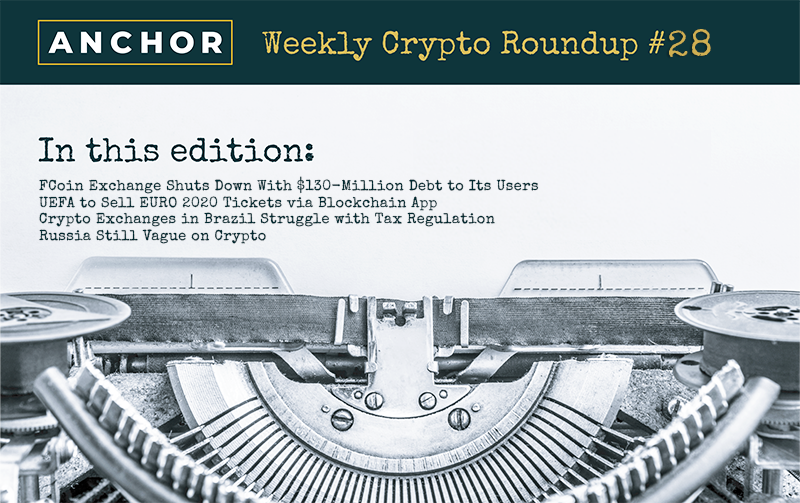 It’s February 20th, fellow Anchorians, which means that 14% of 2020 has already passed. How are your New Year resolutions going so far? This information shouldn’t discourage you though, but serve as a friendly reminder that some ideas need to be put into action pronto! Nonetheless, I’m actually curious – since you are experienced crypto enthusiasts, do you have any major milestones regarding cryptocurrencies in 2020? Perhaps new coins you want to invest in? Do you want to encourage your friends to go crypto, too? Let’s discuss it in The Anchor Project Community!

To say that a week in the world of crypto was turbulent is becoming a commonly-used phrase now, and this week was no exception either. We closely watched the BTC price movement and its dance with the $10k, but that, of course, wasn’t the only thing worth mentioning. So, buckle up since we are going for another ride!

FCoin Exchange Shuts Down With $130-Million Debt to Its Users

Bad news comes from China! Now that I think about it, maybe it would be better if we started this Roundup with some happier news, but you know what they say… Eat the biggest frog first!

Chinese crypto exchange FCoin announced that they are no longer in a position to process users’ withdrawal demands since they are officially 7-13k BTC short! Shocker, right? This means that FCoin users are now being owed almost $130 million!

Exchange founder and former Huobi CTO, Zhang Jian, explained that there was no hacking attack, and assured its users this wasn’t an exit scam either. However, he failed to explain with clarity what exactly happened and left many users with a bitter taste in their mouths.

Apparently, the issue came from internal system errors that are ‘’a little too complicated to be explained in a single sentence’’. Mr. Zhang apologized to the public and promised that he will compensate for the user losses with his personal profit gained from other projects. What those projects are and when this will happen is TBA, though.

FCoin was launched in May 2018 and promptly became a high-volume exchange thanks to its innovative, yet controversial ‘’transaction mining’’ model. At the time, many people alerted the volume was fake and that the entire project might be a Ponzi scheme, including famous Binance’s CEO CZ.  Guess they weren’t wrong. A lesson to take out of this mess – you can never be careful enough when it comes to your assets!

There is one well-known expression by Arrigo Sacchi: ‘’Football is the most important of the unimportant things in life!’’ And he was absolutely right – football represents passion, loyalty, tears of both happiness and sadness, and something that billions of people have in common. It is also one of the biggest industries in the world, with a lot of money around so it comes as no surprise that the administrative bodies such as UEFA want to upgrade and optimize their relationships with customers using emerging technologies.

Here’s a reminder. Some of the football giants have already embraced the blockchain technology and tokenization, i.e. Juventus and Barcelona football clubs. Selling tickets in a blockchain-facilitated way is not new either. But right now, it’s UEFA’s turn!

The Union of European Football Associations (UEFA) announced on Feb. 17th that it will distribute over one million tickets for EURO 2020 via a blockchain-enabled mobile application available for both Android and iOS devices. In this manner, UEFA wants to eliminate the risk of fake tickets and to improve the entry process to the stadiums. Purchased tickets will be delivered to the buyers a week before the match date and later activated via QR code by Bluetooth once the fans are in close proximity to the stadium. This app will be available for download in late May 2020.

Since more than 28 million tickets for EURO 2020 have already been requested, and spectators will be coming from all over Europe and even the world, ‘’mobile tickets’’ seemed like an elegant idea.

We all fear tax authorities, from average Joe to the biggest conglomerates around the globe. With a good reason nonetheless – you can’t negotiate with the law! You can only hope it’ll change.

Cryptocurrency exchanges in the largest Latin American country will concur since the last few months have been really tough for them in terms of tax regulation. Two major Brazilian exchanges were forced to shut down while facing threats of heavy fines due to the new tax norms from August 2019.

Acesso Bitcoin Exchange co-founder Pedro Nunes said that ‘’after the Federal Revenue Service introduced these rules we noticed a significant decrease in the traded volume’’ which later coerced them into closing their business. Another crypto exchange from Brazil, Latoex, deals with a similar issue. They are forced to pay a fine of 100,000 BRD (approx. $23,000) if they refuse to comply with a suspension order from Brazil’s Securities and Exchange Commission.

All these conundrums come from the fact that Brazil still has no clear crypto regulation, meaning many crypto-related activities fall under different legislative acts. On the bright side, both Congress and Senate are looking to introduce new bills to regulate the country’s crypto industry.

No worries, Brazilian or not, we will keep you posted!

Before we dive into this piece of news, let’s remember the moment when Changpeng Zhao (CZ) called Vladimir Putin ‘’the most influential person in blockchain’’. At the time, the global crypto community still had hopes that the largest country on Earth would become a safe haven for cryptocurrency enthusiasts.

Spoiler alert: that did not happen. However, if we are being perfectly honest, Russia has shown some progress in terms of crypto regulation, yet it still remains somehow vague and non-comprehensive. It’s evident that this country sees perks of crypto and blockchain adoption, but legislation has failed to follow it up.

So, the good news is:

The Central Bank of Russia (CBR) officially proposed a legal framework for tokenization, meaning the Russian citizens will now be able to tokenize their assets on a blockchain platform and, of course, issue them to investors.

We are still waiting on a formal, wholesome bill that would regulate all crypto activities in the Russian Federation. In the meantime, it seems like it’s going south since the sale and the purchase of cryptocurrencies will be labeled as ‘’suspicious activities’’ under the new CBR guidance.

It’s definitely not a good time to be a crypto trader in Russia but, hey, there are worse places to be in, right?! All jokes aside, this situation represents a real hurdle for users since it is not clearly stated which activities will be punishable by law and which ones will ‘’only’’ be ‘’tracked’’.

The whole world is waiting for the Russian crypto saga to unfold, but we can make a pinky promise that you will be among the first ones to know when it does!

Speculation has always been a strong force in the cryptocurrency world, don’t you think? Just mere statements coming from important people can have a vast influence on the market.

Though influenced by it, the crypto industry is not rigidly defined by ‘’ifs’’ and ‘’mays’’. Nevertheless, you can rest assured that the most important events will always be analyzed in your Weekly Crypto Roundups.

Once again, we have traveled the world together, at least through the latest news! Until next time – I wish you fair winds and following seas, fellow Anchorians!