PREDICTIONS FOR 2020, BIG NEWS FROM THE PAST FORECAST THE FUTURE 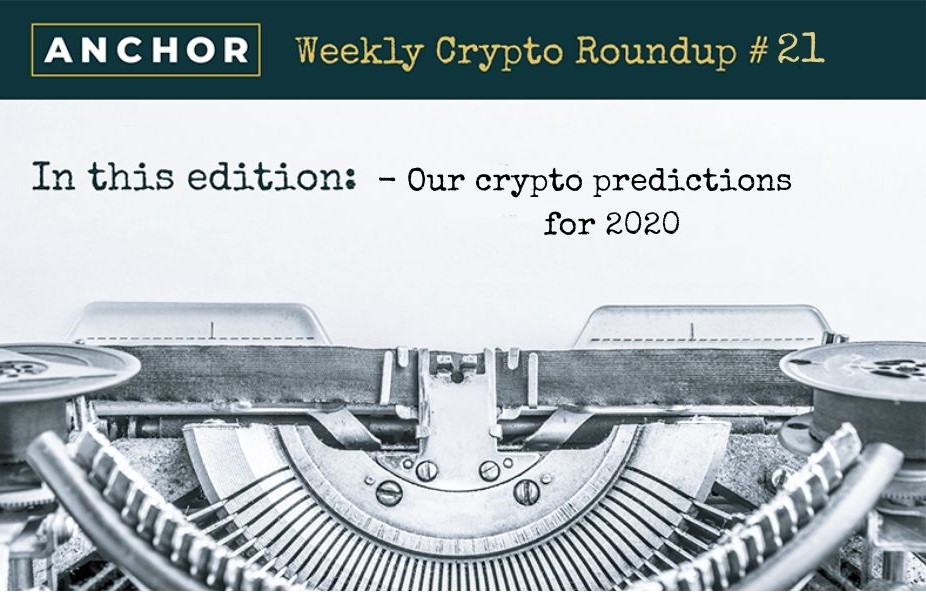 Happy New Year, dear Anchorians! This will be a slightly different Roundup. Considering that we are at the beginning of a very promising year for crypto, let’s cast our gaze into the future. Of course, predictions are hard to make accurately, especially in our industry which is young, budding and thrives on competition and volatility. But, bear with us. Let’s see what big news from 2019 could tell us about what’s shaping up in 2020.

For example, there was a lot of excitement in the bitcoin space in anticipation of whether the U.S. Securities and Exchange Commission (SEC) will approve any of the several Bitcoin ETF filings. Authorities rejected all of them on the grounds of not enough financial surveillance and manipulation in the markets. Another reason for Bitcoin ETF not happening could be the recent appointment of the new chairman of the regulatory body that oversees the SEC and FINRA. Word has it, he’s quite against cryptocurrencies in general, and anti-bitcoin in particular. This could hint at 2020 being another year without Bitcoin ETF!

In 2019 China was prominent in the crypto-news. Mostly because of President Xi Jinping’s blockchain speech. Speaking as part of the 18th collective study of the Political Bureau of the Central Committee, President Xi said blockchain technology has a wide array of applications within China, listing topics ranging from financing businesses to mass transit and poverty alleviation. He was vocal about a top-down approach concerning implementation, calling for guidance and regulation, stating that the tech should be widespread, including the investments in training platforms and “innovation teams” before implementation.

People’s Republic was always an exercise in contradictions, a big enigma to the rest of the world. Namely, Chinese regulatory authorities had imposed a ban on initial coin offerings (ICO) and termed it illegal in China in September 2017. Despite holding close to 70% of bitcoin mining power, China is acting aggressively against crypto. The government is campaigning against crypto-exchanges. In fact, PRC ramped up the pressure, shutting down many blockchain startups and exchanges in November and December.

On the other hand, the big news that splashed last year was Tencent’s alleged opening of research and development division to heavily invest in crypto. This leads us to believe that the People’s Republic is not against all things crypto, just wants to build its own coin and keep it stable. Sort of going against the grain of blockchain-based virtual currency market which is free and decentralized, China wants to build a stable and government-owned centralized environment for crypto.

There are other reasons, of course, for PRC’s interest in building its own digital currency. China is big on technology innovations and is always trying to be the leader. What we are seeing now with blockchain is the third time this country’s government has promoted a certain technology. Previously this was done with 5G and AI. Huawei, one of the largest Chinese companies with the massive power of 76,000 research and development staff and Q1 2019 revenues of $26 billion, is already implementing the largest 5G projects in Europe.

Now, China is doing the same with blockchain; by declaring it a national priority they will have every Tier 1 and 2 cities implementing their own blockchain and digital assets policies and enforcing the blockchain standard.

That’s not the only goal, as, with CBDC and digital currency payment platform, new digital yuan could become a global currency, offering lower-cost cross-border payments and better liquidity management, and trading efficiency using the automation feature of smart contracts.

Not only this would mean a great advantage for China in fighting the trade war against the U.S. but also its dominance on the emerging market. If I can say so, PRC took it personally that Facebook’s Libra excluded RMB from a basket of currencies backing their coin. Everything Libra is trying to achieve seems like China can do a lot easier with UnionPay, AliPay and WeChat’s massive exposure of 1 billion monthly active users.

DeFi ecosystem is thriving. After years of development, the MakerDAO has launched a multi-collateral stablecoin, switching to DAI (which replaced legacy token, single-collateral coin). Some already hail this event as a milestone in DeFi history. Bitcoin is accepted as collateral for DAI, DAI becoming number two stablecoin, bringing decentralized cross-chain interoperability to DeFi, these are just some of the suggestions by the community, which we might see coming up in 2020.

Currently, we have a little over $290 million locked in the various applications on the DeFi. This number is mostly due to the growth of Maker DAO and Dai stablecoin, but nonetheless, there is an expansion of decentralized exchanges, prediction markets, and lending/borrowing applications. The Open Finance narrative was also hot in the venture capital (VC) space and this trend will continue.

The Block has predicted that next year will see greater leverage for DeFi derivatives, more liquidity, and more sophisticated financial products. Bobby Ong, co-founder of Coingecko claims that DeFi growth will see total value locked in the excess of $1 billion, with more than 100 apps by the end of 2020.

Another very real challenge for DeFi will be staying on top of Know Your Customer (KYC) and anti-money laundering (AML) compliance or facing regulatory pressure. Speaking of regulation and regulators…

As we have reported, the Cryptocurrency Act of 2020 is just around the corner. Earlier in 2019, actually, Wyoming has enacted a total of 13 blockchain-supporting laws, becoming a leader in providing a legal framework for individuals and companies to flourish in the field of crypto. In the wake of such legislators’ moves Colorado, Arizona, and New Mexico were reported looking into similar work.

Just to clarify, U.S. federal authorities are preparing more than just the Cryptocurrency Act. In fact, the act is there to lay the groundwork for further legislation. It is not a comprehensive framework yet, as the Act will deal with basic legal definitions and more importantly, which federal regulatory bodies will deal with crypto-currency, crypto-commodity, and crypto-security.

More regulation will bring new stability, clear many obstacles and hopefully legislators will follow the hints of judiciaries which are already poised to rule against the Securities and Exchanges Commission (SEC) in crypto-related cases.

Woah, stop there. Big words, eh? Paradise? Actually, yes. You see, experts across the board are predicting a bright future for stablecoins. Here’s why. News around the crypto-world points out that institutional capital is getting more and more eager to enter the field of digital currency.

It started with JP Morgan’s announcement in March when the world of blockchain and banking was set alight. Exciting both banking and enterprise blockchain community was the news that JP Morgan has created its own stablecoin. Far from being a feat of engineering or technology, and attacked by many to be the marketing stunt, it is nonetheless an innovation in a world of anachronistic business processes and notoriously old technology, where a fax machine is still considered a vital part of how business is done!

The second fact that makes us believe that the era of stablecoins is upon us – Tether is now the world’s most widely used cryptocurrency. It happened in April for the first time and has consistently exceeded Bitcoin’s volume since August. While this is great news for stablecoin adoption, there is a problem that haunts Tether, and leaves room for competition, it tends to be  volatile, removing the stable- from stablecoin. Namely, after they changed the backing to include loans to affiliate companies in March, they revealed that the coin was not actually tethered to USD, as promised. Much promised audit also never materialized.

The real bomb was dropped when Facebook announced Libra in June. Of course, the currency and the network do not exist yet. The importance of Facebook’s move is great even if the future of the project is yet unclear. Although Libra is a good idea, it has faced numerous problems since the first announcement. From US Congress hearings, over Mastercard, Visa, PayPal, Stripe and Booking Holdings backing out of the Libra Association, to potential privacy issues, this token has a lot to handle before it becomes globally accepted. However, it is still a good sign because it shows that stablecoins will seize a crucial role in global trade and the economic world order. Cash was the king, but it seems that the next king will be stablecoins.

We can expect Amazon’s stablecoin, as well as Delta’s or T-Mobile’s currencies. 2020 will see the rise of the second generation of stablecoins. Furthermore, with stablecoins becoming a viable competitor in the multi-billion or multi-trillion-dollar markets of remittance, retail payments, and cross-border transactions, the stablecoin industry itself could become a trillion-dollar industry within the next decade.

With a stable and apolitical store of value, such as our MMU, that ensures a predictable, stable, and non-flationary value peg, stablecoins can really get a shot at becoming recognized globally as currencies, and used widely for savings, as well as trading, and purchase of goods and services.

2020 has been announced as a year when the next recession will start, so having stablecoins as a store of non-volatile value can be a crucial tool in saving the value of one’s holdings. Just think about it – if you’re holding a token that’s pegged to a stable basket of currencies, that outpaces inflation, you will have a safe harbor throughout crypto and fiat turmoils.

With all of the above in mind, I can definitely see cryptocurrencies taking a big leap forward in 2020 – both in terms of adoption, and in terms of finding more use cases.

Another thing that will boost this is the upcoming Bitcoin halving.

Prices of BTC and all major currencies went up prior to each of the previous halvings and continued for some time after. With a bit more than 130 days till ETA date, it is the event that shapes both the future and present of Bitcoin, and can potentially give all other cryptocurrencies a boost.

We know it is impossible to tell the future, but with momentum rolling from 2019 it seems that 2020 will be a fruitful one for the world of crypto. We can only look forward to the growth of the markets and wider adoption. We wish you more stable and mature blockchain finances in 2020!