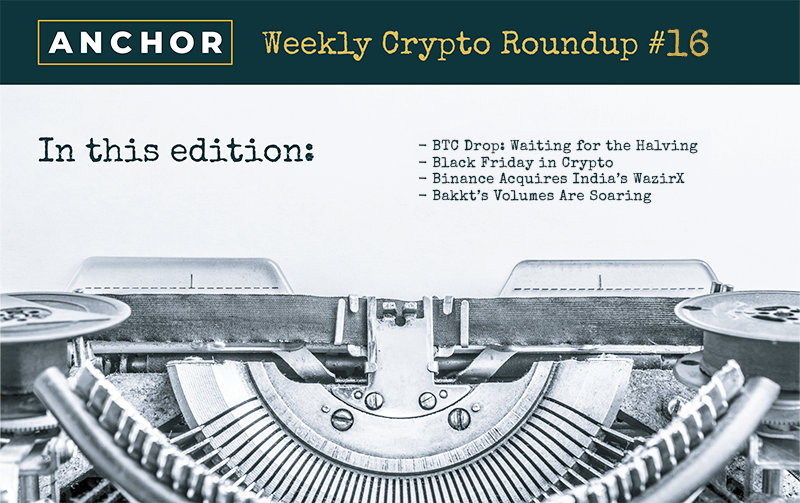 Dear Anchorians, let me tell you a story. There I was, reading the news, keeping track of different events from the past week, preparing for this roundup. Sure, there is always something going on, but I was trying to look for that one big piece of news. I swear I was ready to conclude that this week was significantly calmer than the last one. Then, just as I was about to start writing – wham!

And I was really wondering if it could be the breaking news I was looking for. It surely had all the elements of a real drama. UPbit lost $50 mil worth of Ether (ETH). Whale Alert, a Twitter service that monitors blockchain transactions,  did mention that 342,000 ETH, valued at $49,848, 273 were transferred from UPbit to the unknown wallet. Several people on social media called it a hack.

Call me crazy, but I started seeing a silver lining in this tragedy. Sure, the hack was this year’s eighth breach for UPbit and the total damage to date sits around $1.4 billion. Earlier this month at least seven other exchanges were hit, from Vietnam’s VinDax that was gouged for about half a million to Japan’s Bitpoint losing $32 mil. But what awed me was the UPbit’s announcement that they will cover the losses from their assets and “business as usual” will commence two weeks after the deposit and withdrawal break.

While losing $50 mil is nothing to sneeze at, it didn’t stop UPbit. Of course, they have to take a break and get their stuff together, but nobody can stop progress. Bad things happen, but good things come out of it. I mean, BTC drops, but Bakkt’s volumes are soaring. Binance got hacked earlier this year, but hey, they’ve just acquired India’s WazirX exchange, setting foot onto a market with 1 billion users. And in the spirit of positivity and the unstoppable world of crypto, I’ve decided to add a little Black Friday primer for all those who want to grab good deals and earn some coin during the upcoming holiday season, so here we go…

BTC Drop: Waiting for the Halving

Bitcoin (BTC) price has fallen by nearly 30% since rising as high as $10,600 in October. Since then BTC has struggled to regain momentum. Good thing is, despite the sharp drop, 54% of bitcoin holders are still ‘in the money’. It means that the current price, as low as it may be, is still above the average price at which coins were acquired.

Optimists are looking forward to the next halving event taking place 5 months from now. As you know, halvings are at the core of the cryptocurrency economic models. While fiat currencies have essentially an infinite supply, the total number of Bitcoins has the maximum supply. Every 210,000 blocks, the reward for mining a block will be halved. Roughly estimated, the halving occurs every four years. We are currently in the era of 12.5 BTC per block, which will drop to 6.25 next year.

Prices went up prior to each of the previous halvings and continued for some time after. This is because the supply scarcity of Bitcoin,  which is mimicking gold mining, gives BTC a high stock-to-flow (S2F) value. Basically, not unlike gold, the Bitcoin supply is so limited that the ratio of the current stock and its flow (the amount produced in a year) drives the price up.

In fact, the S2F model which is used to predict prices of gold and silver, when applied to bitcoin,  indicates that the impending halving will see Bitcoin soar to the range of $50,000-$60,000! Surely, the bulls are rejoicing!

But if the bull run is expected, why hasn’t it already happened? ? Why isn’t the halving already priced in? Remember that bump to $12,000 earlier this year? That was it, the pessimists claim. You know, the models tend to fit until they don’t. Some analysts criticize the S2F model stating that it only represents the supply end of the market and disregards the demand.

Bitcoin is, actually, on the perilous precipice. If the price drops further, a lot of smaller miners could drop out of the production process, shrinking the market. Bearish sentiment could cause crypto investors to panic, resulting in a deeper price drop. The longevity of Bitcoin could be in jeopardy.

We will keep you posted and see how this is trending. The rise of forecasting models is a good thing and could awaken more investor interest. There is still a chance for that bull run to happen… As long as the volume of investments is in the ballpark of $3 billion (as per bitcoin investor and analyst Tuur Demeester’s estimates) before the next halving, the optimistic sentiment is not just a pipe dream.

Black Friday seems to have arrived earlier in the crypto market. Unlike the real Black Friday, however, there isn’t much of a rush to buy cryptos even at the discount rates. The aforementioned drop might have something to do with the lack of bullish impulse.

Ronnie Moas, the crypto analyst, predicts that while there is no easy money in crypto-trading, the sale price of $7,000 (or lower) will make for some nice investment against the expected fair value of at least $28,000 when the halving price bump kicks in.

Consider also the ETH’s 12-hour chart which shows candlestick pattern. It may indicate optimistic momentum that materializes as a rebound. Maybe the prices won’t go to a trading high of $199, but it surely will make for some interesting investment, as the ETH’s price drop is currently around 30%.

Don’t be rattled, chips in Blockstream’s CSO, Samson Mow. While LTC currently experiences the drop similar to other currencies, the analysis indicates that after steep declines, new opportunities may arise… In other words, buying low, with all the extra Black Friday discounts,  could be a good chance to plug into crypto trading and get ready to ride the wave of rebounds.

If you are more interested in real Black Friday, there is a welcoming influx of sweet shopping deals that will allow you to enjoy spending your fiat while earning some crypto!

The browser app Lolli offers bitcoin awards from brands like Sephora, Bloomingdale’s and Macy’s. Not bad at all, as you can get your Christmas gifts early and ka-ching some BTC! StormShop offers cash-back rewards, paying out in DAI, Ether, BTC and their own StormX coin. MakerDAO even donated $10,000 in DAI to StormX so they can distribute an extra $5 worth of rewards to early adopters who cash out in DAI.

Mobile apps like Fold, allow you to buy in brick-and-mortar shops using crypto, and this Black Friday is the chance to get some sweet offers. They also have a program that will let you earn BTC while spending fiat for purchases at Amazon, Starbucks or Target, among other brands.

The People’s Republic of China has put real tight pressure on the crypto-exchange companies, targeting Binance as well as many others. As I said, nobody can stop progress, so Binance is not slowed down by the trouble. In reality, Binance is going strong and with the latest acquisition of India’s exchange platform WazirX, they have gained a foothold in a potentially vast market.

Now, India’s market is not very crypto-friendly. Namely, last year the nation’s central bank put a ban on banking services for crypto companies and government panel said to have been considering a total ban of crypto in the country. Binance seems to think of that as a risk worth taking, largely due to the potential size of the market, estimated at one billion users.

While WazirX is sticking to crypto-to-crypto and peer-to-peer trades, Binance is offering a clever solution to the banking issues. Binance Fiat Gateway launched Indian rupees, making it possible for WaziriX’s users to buy the Tether (USDT) stablecoin with rupees. With rupee to USDT exchange, they can proceed to trade any crypto offered by Binance. Now, more than a billion people are one step closer to freedom of money, as well as a simple way to obtain crypto.

While cryptocurrency has not yet graduated from being a technophile’s pride and joy to the mainstream financial tool, it’s getting there. Attracting institutional investment money represents an important step. Imagine if money tied up in stocks, bonds or other financial instruments pours into the world of crypto. It would increase the total market cap of the crypto-sphere by orders of magnitude. Mainstream recognition that would follow the surge of institutional money? That would really do wonders for the legitimacy of crypto.

Bakkt makes the entrance and brings household names like Starbucks and Microsoft. Specifically, Bakkt was built on Microsoft’s Azure cloud service to create an open and regulated global ecosystem for digital assets. What made Bakkt stand out from the crowd was the immediate inclusion of markets regulated by the federal government, like warehousing. Starbucks works with Bakkt to be the first major merchant to join the plan to convert digital assets into dollars for use at Starbucks.

Oh, but it is one thing to kick the door and flaunt big fat list of investors and backers, and it’s another to stand the scrutiny of the market. Lo and behold! Amid the BTC drop, Bakkt’s volumes simply soar.

Check this out, in October they set a record of 452 contracts traded (each one valued at 1 BTC). Then they register a 257% volume increase in 24 hours, with 1,183 Bitcoin futures contracts. All is fine, BTC pops up to $10k. Then the drop happens. As the Bitcoin slumps to under $8000, the volume of trading with Bakkt jumps again. At the beginning of November, they break the record, with a daily volume of 1,741 contracts. A few days later, boom! It happens again, with the tally at 1,756 contracts.

Now, $15 mil is a small fraction of the average daily turnover on some other crypto trading platforms, say CME Group, but for Bakkt it does make the start of that lovely hockey stick curve that everyone likes to see on their growth graph.

From bearish sentiment in the intro to the bullish news in the end. That’s how I like it! Catch you in the next roundup and happy holidays!