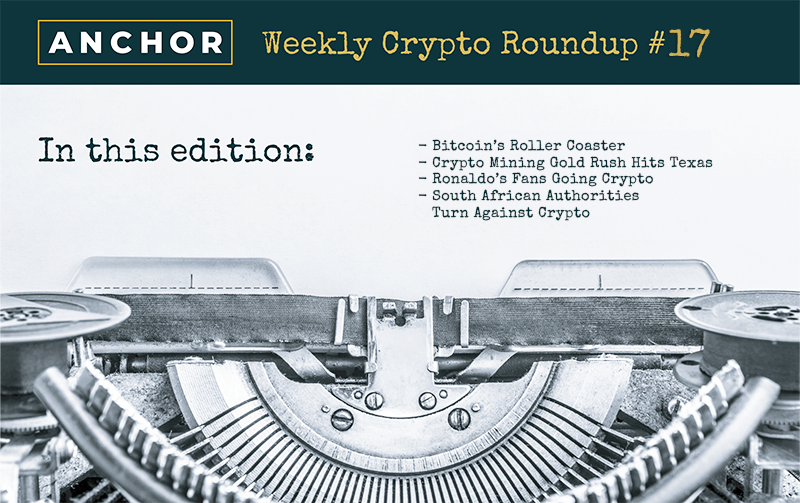 As you know, dear Anchorians, there’s never a dull moment in the world of crypto. This week was blessed with some interesting news as the Bitcoin did a little jump right amid the bearish trend we saw last week. Then there is a big soccer club joining the world of cryptocurrencies. Now, soccer might be a sport for kids in the USA, but in the rest of the world, it’s number one. With association football clubs being focal points for massive amounts of money, FC Juventus minting its own tokens is potentially huge in cryptocurrency adoption news.

However, something else, potentially huge, also happened this week. Namely, Kelly Loeffler was appointed to the U.S. Senate on Wednesday. She stepped down from the helm of Bakkt, leaving the ICE backed startup without a CEO. It’s not certain what that means for the world of crypto, as in her introductory remarks she didn’t mention bitcoin or related technologies. She was more worried about the President’s disapproval, as Loeffler wasn’t Trump’s first choice for the seat of retiring Senator Johnny Isakson.

Bakkt congratulated Loeffler on her new role but didn’t address who might take over the position. This Intercontinental Exchange announced that they will continue to work closely with Bakkt’s senior management team, building on the innovations and progress achieved in the past year.

Last week we reported that Bitcoin was on a perilous precipice. Bearish sentiment was high, as some analysts suspected that upcoming halving would not trigger the soaring of Bitcoin’s price to the range of $50,000 – $60,000. Despite an optimistic forecast of the Stack-to-Flow (S2F) model, critics claimed that the bump to $12,000 we have seen earlier this year was, in fact, the bull run everyone expected.

A lot has happened since last week. While many blame low trading volumes for the increased volatility, the Bitcoin’s 50- and 100-week moving averages (MA) show the same cross that marked the start of a long-term bull market. MA studies are based on historical data, for instance, 50-week MA is based on year-old info and the 100-week MA is tracking price action seen over the last two years. This indicates that the bull cross has limited predictive powers for the current market volatility.

And then, boom! Prices have suddenly leaped for Bitcoin and other major cryptocurrencies, including Litecoin, Ripple’s XRP and Ethereum. Bitcoin soaring almost $1000 in just minutes, reaching the price of $7,801. Going up and down, BTC slumped to $7,087 (Wednesday’s low), stabilizing around $7200 (during the writing of this Roundup, BTC went from -0.89% to +1.05%).

This new drop seems to be a bear trap. Bitcoin would have to drop below $6,800 to break the pattern which indicates that the dip is just temporary. Moreover, optimists point at the so-called Santa rally, the traditional price surge that happens towards the end of the year. Technical data looks positive, the bull cross is there and while predictions are not reliable, recent developments suggest 2020 could be a big year for bitcoin.

The eyes of Texas are upon Whinstone US (Texas) and Northern Bitcoin AG (Germany). They plan to set up the largest bitcoin mining facility in the world. Even the Chinese are moving their operation to the Lone-Star State. Bitmain, one of the giants in the world of crypto mining already operates a 50-megawatt farm in Texas, with the goal to expand it to a 300-megawatt capacity.

Why Texas? Power-hungry chips needed to mine bitcoin surely can find cheaper sustenance in China’s electricity prices. Not to mention the hot and humid climate of the 2nd largest U.S. state (well, depends on who you ask) which makes mining gear prone to overheating. Wouldn’t miners want to set up shop in colder regions?

And yet, crypto miners are moving to Texas. The first reason is obvious. With the People’s Republic of China increasing hostility it’s not strange to see the most powerful mining companies wanting to move to a safer harbor. Still, why Texas? Ah, the second reason is not so obvious…

Maybe you didn’t know but parts of the Lone-Star State were once prosperous mining regions. Not for crypto but for real ore. Rockdale, TX was the site of a large aluminum smelting facility. Alcoa halted smelting operations in 2008 and the plant closed in 2014. Power facility that once provided juice for the mining, closed in 2018. Do you see it now? Instead of bauxite mining and smelting, the infrastructure – still connected to the power grid – will be used to power crypto mining operations. What a nice case of industrial redevelopment!

El Paso is another city drawing the attention of crypto miners. Using the power of wind and innovative new cooling technology, Digital Currency Group (DCG) and Layer 1 are developing a huge mining plant. Seems like China’s mining market share will shrink significantly from the current 70 percent.

Even if FC Juventus doesn’t ring a bell, the name of their star player – Cristiano Ronaldo – surely is a household one. Unlike most European sporting supporters’ groups which are concentrated around their own club’s city of origin, Juve has fans around the world. With around 423 million supporters, The Black and Whites boast one of the largest fan bases in the world of soccer.

Juventus has partnered with blockchain startup focused on sports, Socios.com for the $JUV fungible token. Admirers of the Italian club can now use the Token Hunt app to get some free coins or purchase them at a quite affordable price of $2 a pop. Initial circulation is 20 million tokens which can be exchanged for exclusive merchandise and unique experiences.

For starters, the token holders can take part in the club decision-making regarding fan activities, like choosing the song to be played whenever a goal is scored. Juve will offer a range of polls, surveys, and further rewards. Giorgio Ricci, chief revenue officer of Juventus expressed his pride to be the first soccer club to inaugurate new ways of interacting with their fans around the world. This partnership shows a new facet of the blockchain’s innovative nature.

Socios is planning to expand this idea and bring a similar experience to new partners, Paris Saint-Germain (PSG), Atletico Madrid, West Ham United, and dozens of others. Socios has a goal to launch trading pairs in Q1 2020 ($JUV with their own native token $CHZ), allowing fans to trade tokens.

The sports industry is commonly considered to be worth more than $500 billion (some estimates running up to $1.3 trillion!), with soccer (associative football) holding 43 percent of this market. Socio’s partnership with Juventus surely is a piece of welcome news in the field of crypto adoption, opening possibilities for further marriages of blockchain technologies and sports.

Cryptocurrency has gained popularity as a more reliable method of sending money abroad. Coupled with ZAR’s volatility (one of the world’s most unstable currencies) it’s not strange to learn that South African residents are finding protection for their money in crypto. Up to 11 percent of locals own at least one of the crypto-coins.

A major South African crypto exchange Luno reports the daily trading volume of $5.4 million, boasting 3 million wallets across 40 countries. The African blockchain ecosystem is quite lively with over 64 firms and startups. Beyond the exchanges and wallets, blockchain technologies are really boosting investments into the region, prompting Jack Dorsey, CEO of Twitter to declare that Africa will “define the future of Bitcoin”.

South African Reserve Bank is planning to enforce new rules to stop cryptocurrencies from being used to evade currency control limits. Local banks are joining too. First National Bank said that it will stop serving major South African exchanges. The biggest exchanges, like Luno, ICE3X, and VALR are the first to bear the brunt of traditional financing institutions and the government. The crackdown didn’t hit as hard as in China which makes crypto-based businesses hopeful that policymakers will come around and find solutions that will not hurt the emerging South African market.