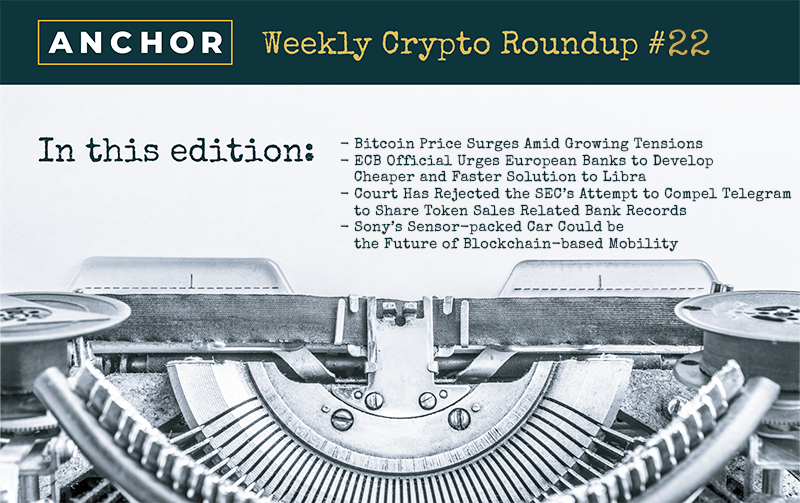 Greetings, dear Anchorians, I hope you have managed to rest and relax during the holiday season behind us. Time to face the new year with new vigor and optimism! Alas, the first event looming on the horizon is – war!

While global markets rallied to kick off 2020—amid renewed global trade optimism and a Chinese economic stimulus package—a U.S. airstrike that killed a top Iranian general last Thursday caused stocks to plunge. President Donald Trump ordered the strike that killed Soleimani, the leader of Iran’s Islamic Revolutionary Guards, as a response to a New Year’s Eve attack by Iran-backed militants on the U.S. embassy in Baghdad.

War… never changes. While the tensions escalated, the stock market fell – except for “war stocks” and safe-haven assets like gold, oil and – Bitcoin. More on that shortly. First I want to talk about the shocking news that the Bitcoin exchange rate in Iran soared to $24,000!

It kinda made sense. People in Iran have turned to bitcoin before to evade U.S. sanctions on the country. It was and still is literarily the only way to get money out of the country. So when the first reports claimed that Iranians are buying BTC at around 1 billion Iranian rials, the news seemed true. However, the official exchange rate is only observed by the Central Bank. Weakened by international sanctions, the Iranian rial lost value. The real exchange rate is about 3x worse than the official rate, which means that Iranians were buying crypto at $7208 per bitcoin, which is higher, but close to the going rate. So, check your news and sources, just like we’ve picked these four pieces of exciting crypto-news!

Bitcoin entered the new year around $6,500 with everyone wondering when will the prices start to recover, will there be a halving-fueled bullish price soaring. In the week when the U.S. launched an airstrike at Iranian General Qassem Soleimani, the price was recovered to $6,850. With the tensions escalating, BTC reached a two-week high of $7,580 on Monday. On Tuesday, as the Iranian government promised massive retaliation, the price spiked to $8,450!

As soon as it was clear that President Trump will not seek further military action, the tensions relaxed and so did the prices, as BTC faltered all the way to the support at $8,000. It seems that the trend will continue, spiking slightly but holding at about $7,400.

However, this event sparked a heated debate about whether Bitcoin is indeed a safe-haven or not. Gold is considered the ultimate keeper of value. The simultaneous price increase of cryptocurrencies, namely along with BTC, altcoins gained value, LTC spiked 4.74% gain and Chainlink (LINK) was bumped up 10.04%, was the signal for analysts like Michael Novogratz to conclude that cryptocurrency has matured to the status of digital gold.

On the bearish side of the street, analysts warn that the spike in price was not due to investors seeking alternative ways to safeguard their capital, but due to speculations that this transition from gold to crypto will happen.

We will keep you posted about the prices of bitcoin, though the growing consensus amid the somewhat relaxed tensions in the Middle East is that most likely outcome for BTC will be settled at $6,850 range and wait for the better days to come.

Jens Weidmann, president of Deutsche Bundesbank (Germany’s central bank) and policymaker for the European Central Bank (ECB) says banks in the region need to be wary of Libra and private crypto projects. Weidmann is the latest financial stakeholder in the European Union (EU) to call for banks to take notice of the emerging crypto sector.

“I’m not in favor of always immediately calling on the state” to come up with solutions, Weidmann said in an interview with German newspaper Handelsblatt published Thursday. “In a market economy, it’s up to companies to develop products that meet customer demands.”

In other words, Weidmann is not in favor of a central bank digital currency (CBDC) yet. He believes that it is necessary to first define the pros and cons of a CBDC. “Then it can be decided whether it is needed and the risks can be controlled,” he said in the interview.

Rather than blocking private crypto projects like Libra, the Bundesbank chief advised European banks to go with the times and create platforms that would facilitate faster and cheaper cross-border remittances. Crypto projects like Ripple and Libra promise transaction times that far outstrip the capabilities of mainstream avenues at a fraction of their cost.

Virtual banking is expected to dovetail with the fully expressed electronic banking scene in countries like China as well as provide robust solutions for customers who fall into the overbanked category by offering significant cost reductions for banking and financial products.

It remains to see if the European Central Bank will join the CBDC wars or not. Meanwhile, indications already exist that China’s digital currency will aid authorities in Beijing amassing greater state control over money flows in China. The Chinese government could potentially utilize the power of blockchain technology to engineer near-total financial surveillance of the country’s population.

The Securities and Exchange Commission sued Telegram last October for allegedly conducting illegal token sales worth $1.7 billion. The case has been ongoing since then. Telegram, on its part, has refuted all the allegations made by the SEC. The company recently claimed that “if and when” Gram tokens launch, “they will constitute a currency and/or commodity – not securities under the federal securities laws.”

SEC Division of Enforcement director Steven Peikin said: “We have repeatedly stated that issuers cannot avoid the federal securities laws just by labeling their product a cryptocurrency or a digital token. Telegram seeks to obtain the benefits of a public offering without complying with the long-established disclosure responsibilities designed to protect the investing public.”

The said TON network was originally scheduled to start on October 31, but the lawsuit made the launch unachievable. Investors agreed to postpone the launch to April 30.

Anyway, the court rejected the SEC’s demand. Telegram will still have to provide some of the requested information, but it will be supervised by the court, records will be inspected in compliance with foreign data privacy laws. The SEC didn’t crack Telegram open!

In response, Telegram just reaffirmed that TON Wallet will not be integrated with the company’s app and will continue to operate independently after launch.

Sony announced a car at CES 2020 and it’s all the rage! Why is this relevant for us? Well, I’m sure the simple fact that an electronics company is moving into real-world mobility is not that exciting for the world of crypto, unless…

Well for starters, Sony’s new car is not just an expensive chunk of steel. It’s a sensor-packed platform. There are lidars and radars, cameras and proximity sensors. The windshield is a wraparound screen and there’s 360-degree audio installed. In short, this is not your average car, but a digital platform.

Sony is joining the race for a new kind of car, so they are not alone in this idea. This new breed of transportation will communicate. With traffic control systems. With other cars. With your wallet. Yea, your crypto-wallet. Maybe to pay you for sharing data? More likely to step forward in the vision of machine-to-machine crypto payments.

Self-driven cars are the future and in that future, your vehicle will communicate with other machines. Do you want to go somewhere faster? Fine, your wallet takes a tiny hit and another self-driven car lets your baby get ahead of them. Do you want to earn a bit of crypto? Just spare a few more minutes on the road. Cars will be able to pay tolls, even maintenance, not to mention in-drive entertainment and app use. And it won’t be connected to a credit card…

If robot-to-robot payments are going to happen, this would mean deep and extensive adoption for blockchain technology.

I honestly hope humans will adopt blockchain technologies to make the world a better place, but I’ll settle for robots adopting it as well. Bitcoin will rise and fall, more importantly, it seems we’ve dodged the WW3 scenario. Stay tuned to see if the bullish sentiment will materialize in the case of BTC.