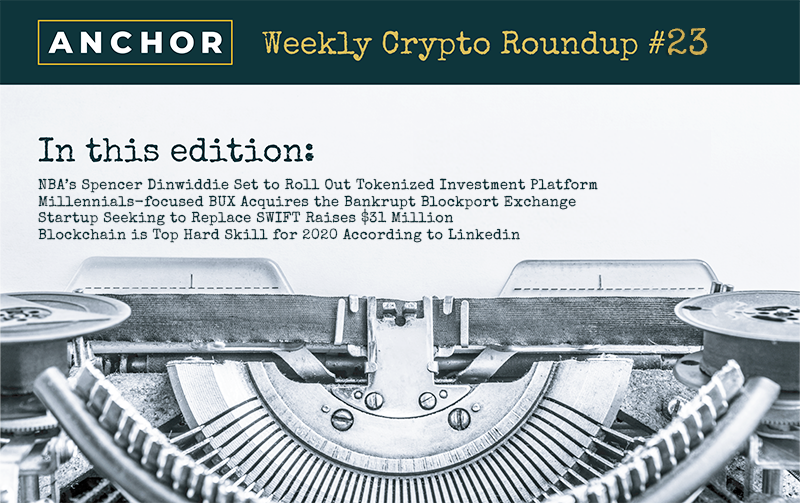 In this week’s roundup, we share with you news about NBA player’s plans to roll out tokenized investment platform, the efforts of BUX to revive the Bankrupt Blockport Exchange, different attempts to replace SWIFT and top hard skills for 2020

Dear Anchorians, I have to say I was a bit worried before I sat down to write this Roundup. The year is still young and I have been wondering if there will be any news worth reporting. Before we get down to the review, after what seemed to be quite an interesting week, I’d like to talk to you about the maturity of crypto finances. As blockchain technology grows and inches closer towards becoming mainstream, twin forces begin to act upon it- attraction and repulsion.

For example, crackdowns on crypto are becoming commonplace. The SEC is alerting the investors that initial exchange offerings (IEO) might be considered securities and that means that IEOs may be subject to registration requirements that apply to offerings under the federal securities law. Considering that Bitcoin.com declared that they want to raise $50 million through the upcoming IEO, SEC’s warning is really perfectly timed.

On the other hand, we have the upcoming World Economic Forum in Davos. Of course, WEF has come under fire as a place where wealthy elites gather to discuss solutions to problems they helped create. However, many emerging technologies are there, organizing their own fringe-Davos events. One of those is Crypto Davos, gatherings to discuss the future of cryptocurrencies. Considering that the theme for this year’s WEF is “Stakeholders for a Cohesive and Sustainable World”, it seems that the worlds of crypto and mainstream are indeed slowly drifting towards each other.

Brooklyn Nets player, Spencer Dinwiddie, intends to launch his tokenized investment vehicle this week. NBA threatens to ban him from the professional league.

Spencer has been receiving flak since the idea first surfaced in October 2019 when Dinwiddie announced his plan to start an Ethereum-based investment platform, DREAM Fan Shares, to sell 90 tokens called SD8 coins. This would allow Spencer to collect up to $13.5 million off of his $34 million guaranteed three-year contract. Token holders would then get monthly payments in the next three years with a 4.95% interest.

NBA protested, as the third year of his contract is optional. They claim that tokenization would be a breach of NBA players’ collective-bargaining agreement. Moreover, investors would gain more in dividends if in 2021 Dinwiddie decided to seek a higher-paying contract. NBA hints that this would mean that the player option was gambling, therefore it would have been a cause for termination.

In response, the Nets player has decided to remove the initial promise of potentially higher dividends in the third year. Since the league is still reviewing Dinwiddie’s proposal, the platform’s launch will most likely be delayed.

BUX is trading app provider based in Amsterdam and focused on serving millennials. They have acquired a bankrupt cryptocurrency exchange Blockport for an undisclosed sum. Blockport will be renamed BUX Crypto and launched in Q1 of this year. Once it starts, BUX Crypto will allow users to trade BTC, ETH, and XRP.

Blockport started strong, raised $15 million in ICO back in January 2018 and yet, they declared bankruptcy in June 2019 after failing to raise $5.5 million in security tokens offering. “Blockport went for fast-to-market strategy and unfortunately ran out of runway in a declining market,” explains founder and CEO of BUX, Nick Bortot. “Under the BUX wing, there will be access to a robust distribution channel, overcoming one of the challenges Blockport faced initially. Despite the challenges, these learnings are valuable and will help build a bigger, better product under the BUX brand,” Bortot added.

If you know anything about remittances and cross border payments, then you know how much of a pain in the neck SWIFT (Society for Worldwide Interbank Financial Telecommunication) is. Truth be told, SWIFT did try to apply blockchain technology to improve the speed of cross border transactions.

It happened last summer when SWIFT settled a cross-border payment from Australia to Singapore in just 13 seconds. More than 10 banks participated in the trial, but SWIFT concluded that the only way to upkeep an acceptable level of transparency would require deploying bilateral blockchains between all parties, but doing so would be too complex to manage in the long run. “Our conclusion is that it’s quite challenging for banks to adopt a DLT-based system today,” the head of the global banking market at SWIFT said.

Basically, whoever disrupts SWIFT has won the struggle to disrupt the whole remittance market. Ripple is often seen as a SWIFT’s rival. They’ve invested $50 million in MoneyGram to jointly offer blockchain-based remittance services.

New kid on the block (tee-hee!), Lightnet, is a Thailand-based startup. They have raised $31 million aiming to replace SWIFT with a blockchain solution of their own. In this round, several notable investors have participated; HashKey Capital, Seven Bank (Japan), Signum Capital, Du Capital, UOB Venture Management (Singapore), and Hanwha Investment and Securities (Korea). The last two mentioned companies also spearheaded the round as the most notable of investors.

Lightnet’s network is named Stellar and it is a blockchain-based platform designed to serve billions of unbanked migrant workers in Southeast Asian markets. The thing with remittance markets is that the circumstances on a particular market heavily depend on so-called corridors. Namely, money is flowing from the higher-wage making countries towards the poorer ones in established routes. For example, just like Stellar was conceived to serve migrant workers in South Asia, Ripple’s partnership with MoneyGram is currently serving the important corridor between Mexico and the U.S.

It remains to be seen if Lightnet will light up the remittances market. It’s not going to be easy, considering Ripple’s dominance and the possibility of Facebook’s Libra serving the two billion unbanked people worldwide.

Blockchain is Top Hard Skill for 2020 According to Linkedin

Professional social network and job site Linkedin listed blockchain as the number one hard skill for 2020.

Last year, the most in-demand skills were cloud computing, analytical reasoning, and artificial intelligence. Sure, these skills are on the list again this year, but blockchain, a skill that wasn’t anywhere near the top list of most sought-after, suddenly surfaced as hot, hot, hot in 2020!

Linkedin researchers cross-referenced users who are getting hired at the highest rates and presto, blockchain emerged. Clearly, top dollar employers are ready to pay people who do blockchain, as this technology has gone all the way from being obscure to becoming a business solution in search of problems to solve. Blockchain tech is no longer confined to financial services.

Benefits of distributed ledgers are not fully explored yet, but the IT industry is saying “Yes!” to blockchain with every job offered by Oracle, IBM, JPMorgan Chase, Microsoft, Amazon, and American Express. Blockchain skill has been on the top of the emerging job list for years, but now it finally popped up as the main deal, as top headhunters strive to feed the 26% increase in demand for skilled blockchain experts.

Well, paint me green and call me a pickle! Now, I sure wish my Momma made me study harder! Luckily, the world of crypto is a wide one and expanding, so there is plenty of space under the blockchain-Sun. See you next week with more exciting news from the bustling world of cryptocurrencies!