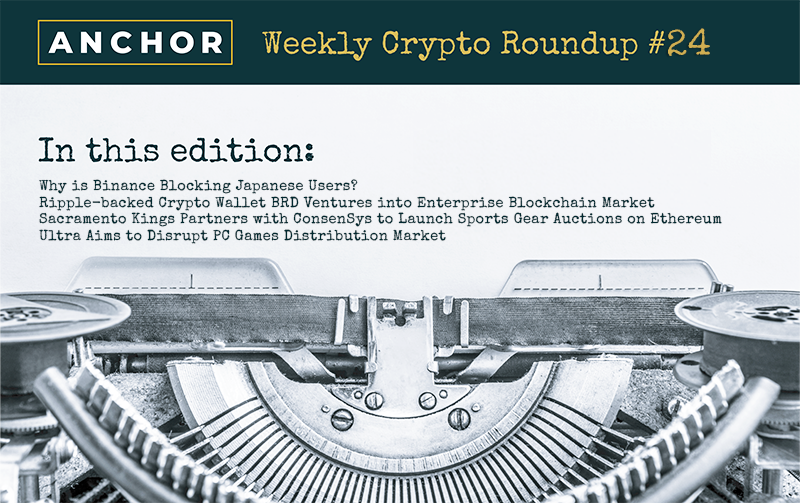 Dear Anchorians, I hope you are enjoying the dynamic start of this year. We are barely a month into it and yet so many things have happened. News broke the Libra Association had seen another high-profile defection, this time from the Vodafone. The parting appears to be amicable, with Vodafone leaving specifically to focus on its own related service and not due to the regulatory concerns that apparently spooked other former members. Namely, Vodafone will dedicate resources previously intended for Libra to its well-established and successful digital payment service M-Pesa, which the company plans to expand beyond the six African nations currently served.

Speaking at Davos, at the blockchain panel held by the Global Blockchain Business Council, Dante Disparte, head of policy and communication with the Libra Association said: “Although the makeup of the Association members may change over time, the design of Libra’s governance and technology ensures the Libra payment system will remain resilient”. It seems that while regulatory issues are pushing back the launch dates, there are also technical design and development issues to handle. “We’d rather go slow and get it right than assign a deadline to launch that keeps us from solving the problem of payments for those who need this solution most,” Disparte said. So, let’s be patient and see what they’ve come up with.

Why is Binance Blocking Japanese Users?

Wait, what?! Crypto exchange Binance may soon stop serving users in Japan. Why would they do that?

There was a notice issued last week which stated that gradual restrictions of trading functions for Japanese residents would be introduced “at a later date”.

All services are still available for Japanese users, but details on restrictions will be announced later, Binance confirmed.

This move actually reminds us of the previous situation with Binance and U.S. clients. Namely, in the announcement of changes to their TOS, last June, the exchange declared it would stop serving United States citizens by September last year. Then they launched a separate exchange, Binance U.S.

Now, this seems like a smart move in the sense of updating their service to fit the regulations and stay legal. However, in the sense of business success, the re-launch didn’t seem to be the best move. Binance partnered with small Californian company BAM Trading Services. Since the launch in October, Binance U.S. has seen a very low volume compared to the Binance, the mother company.

BRD is a cryptocurrency wallet provider and it’s backed by Ripple as well as SBI Holdings, a Japanese financial services giant. They have a new venture named Blockset aiming to serve banks, financial services, institutions, and consultancy firms. The Blockset provides ready to use tools to help different companies to build their own blockchain applications quickly and at a lower cost.

It seems that SBI Holdings recognized that the top companies hiring for blockchain aren’t crypto companies at all, but big players such as Cisco, Verizon, JPMorgan Chase, and others. SBI wanted to use BRD’s infrastructure for projects of their own and realized that it can be commercialized. That’s how BRD decided to venture into the enterprise market.

After almost a year of development, Blockset is ready to go live, supporting Bitcoin, Bitcoin Cash, Ripple, Hedera, and Ethereum networks, with more to be added during this year.

It seems that the enterprise blockchain market is already too crowded, but Blockset aims to reel in customers with helping them not only reduce the costs but also help them address the cost control and ROI calculations.

For example, many of the big companies don’t know how much it currently costs to support the blockchain solutions they employ. “When asked, we got answers ranging from $200 per month to $100,000 per month. And there exist many hidden costs that are hard to quantify,” Spencer Chen, chief marketing officer of BRD, said.

BRD claims that over 20 “financial titans” are already evaluating the Blockset. While Chan couldn’t discuss who those titans are, he added: “But I can speak to the 3 major use cases, and that’s a branded custody solution, internal portfolio reporting and auditing applications, and private/public chain reporting.”

BRD has raised a total of $56 million in venture funding, so it remains to be seen if they will be as successful in the enterprise as they were at their wallet business.

As we’ve reported earlier, Spencer Dinwiddie is battling the NBA over his crypto-biz. But the NBA isn’t done with crypto.

Sacramento Kings has partnered with ConsenSys, a blockchain software development studio, to release a basketball gear platform, based on the Ethereum network. Namely, ConsenSys lends its own supply chain platform, Treum to make sure that auctioneers will get authenticated items with transparent audit trail recording transaction history and future sale, loan, or showroom exhibition of the gear purchased.

The first item offered was Kings guard Buddy Hield’s jersey and it was auctioned at Mavericks vs Kings game through the team’s website. The highest bidder got the gear, a Certifications of Authority as well as a digital token containing the item’s historical and future records.

With this, Kings and ConsenSys aim to enter the $5.4 billion sports memorabilia market. Sacramento Kings were pioneers of crypto in the NBA, accepting bitcoin as payment as early as 2014. This isn’t the Kings’ only crypto venture. In 2018 they launched MiningForGood cryptocurrency mining charity. That same year Kings partnered with CryptoKaiju to release a limited-edition crypto collectible.

“We have integrated blockchain technology into our business across multiple platforms, including our reward program, and now our fans will have the opportunity to securely purchase authentic game-worn merchandise in real-time using an innovative blockchain-based solution,” Sacramento Kings’ chief technology officer Ryan Montoya said in a statement.

I must say my personal favorite case for blockchain technology has to be the gaming industry applications. And maybe you don’t know it, but Valve’s Steam platform is not only the dominant digital distribution platform, but it also became synonymous with the distribution of games. No one buys DVDs with games anymore, right?

There are some other platforms trying to dislodge Valve from their almost monopolistic position. Mainly upstarts trying to appeal to users by promising better treatment of developers, more fair revenue split and better-curated content.

Enters Ultra, from Tallinn, Estonia. They offer PC games distribution platform based on blockchain technology. They aim to introduce new revenue streams, provide effective marketing tools, and establish a rich token-based economy that can be used to improve cross-selling, rewards and merchandising.

“The success of Steam, Google and Apple’s app stores over the last decade means that users have grown to expect and demand the kind of ease-of-use and seamless purchasing experience that these platforms provide,” said Nicolas Gilot, co-CEO of Ultra, in a statement. “This effectively means that developers are having an increasingly difficult time selling their software outside of these walled gardens, which results in large commission fees and loss of control over their own customers.”

“Additionally, as the catalog of games has grown dramatically in recent years, largely due to the market leader Steam’s service offering, this oversaturation further inhibits developers from reaching their audiences,” Gilot said. “Likewise, for gamers themselves, discovering the right game for them has become more difficult because of the sheer quantity of games available. The majority of gamers with purchasing power aren’t aware of the games available to them, other than the ones that have been published on Steam.”

Ultra’s use of Smart Contracts, the programmability built into the Ethereum cryptocurrency, also means that developers can now receive an instant payout to recycle back into their own businesses, combating tedious delays typically experienced when dealing with traditional financial institutions.

Ultra guys know what they’re doing and no small wonder, since their CTO is a former tech officer from Dell and Time Warner. Ultra’s other execs are a stellar crew, like John Goodale, former VP for Unity Technologies, Wallace Poulter from Magic Leap and ex-Atari product manager, Jenna Seiden of Xbox fame (she was head of content development).

Final ThoughtsMaybe you are a fintech enthusiast or sports fan, maybe a hardcore gamer or crypto trader. It doesn’t really matter. What does matter is that blockchain is penetrating into mainstream bringing disruptive solutions and new ways to enjoy the existing technology.