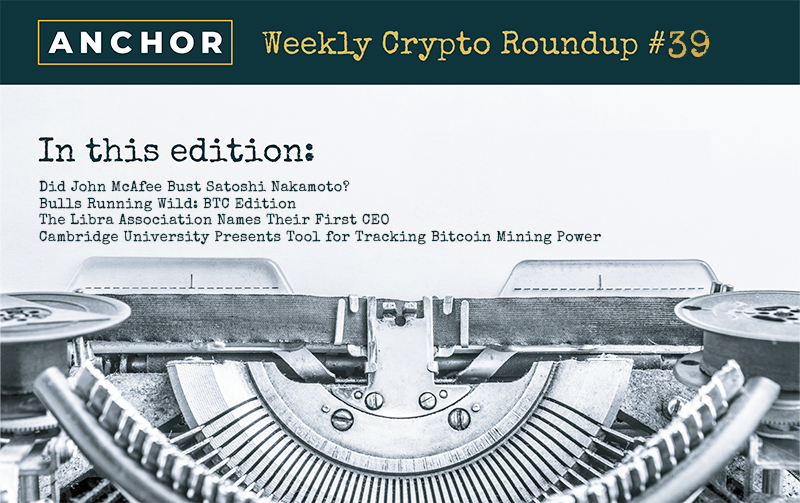 Ahoy, my dear Anchorians! Another week, another victory. How are you feeling these days? Since we are blessed with an amazing international community, I’m curious to hear how you guys are holding up, is the COVID-19 situation now stable in your country, etc. Also, if you are a BTC hodler, tell me how you are preparing for the upcoming halving, what your hedging mechanisms are, and what you expect to happen.

Anchor Telegram Community is always happy to discuss these topics, so feel free to jump aboard >>

Somehow, I feel as if the entire crypto community was itching to see what will happen after the halving, and due to the recent BTC bull run, all eyes are on this particular cryptocurrency. Of course, it’s one of the major subjects in the industry and we will certainly address it in this edition of our Weekly Crypto Roundup! Nonetheless, we will talk about other important events, too, and keep you well-informed, as always. So, as Daenerys would say – Shall we begin?

Okay, guys, we all know that the identity of all-mighty bitcoin creator, Satoshi Nakamoto, is a never-ending matter of discussion within the crypto community. Be that as it may, a veil of mystery still remains Satoshi’s shtick. Do you want to hear what John McAfee had to say about this?

Apparently, he is 99% certain that he knows the identity of Satoshi Nakamoto. Hey, maybe this fact inspired him to become a candidate for the President of the United States! In an exclusive interview he gave to Cointelegraph, he stated: “It was a team of eleven people over a period of five years, that came up, eventually, with Bitcoin.’’ It’s safe to say that Mr. McAfee doesn’t believe in Satoshi Nakamoto actually being one particular person.

What made him think this way? Well, he claims that we can easily find proof in the Bitcoin whitepaper. One of the things that caught his eye was the fact that the spelling is British, not American, and that was the first step in his investigation. Moreover, John McAfee was even, allegedly, ready to go public with this discovery, but changed his mind after a telephone call with, wait for it, none other than Satoshi Nakamoto himself. Well, one of them. The main one. Not sure.

“I have spoken to him on the phone, I was actually going to divulge who he was. Why? Because all of this nonsense was just stupid, people wasting time over nothing — I was going to say, ‘listen, it was this guy.’’

So, what happened? Well, ‘Satoshi’ warned him he could be wrong and possibly end up destroying an innocent man’s life, maybe even causing his death. After that comment, McAfee decided to remain silent.

I know what you’re thinking, all of this is extremely hard to believe but let’s give him the benefit of the doubt for now. After all, we need something fun to keep us going, right? Is this just the quarantine boredom talking or the truth? Only time will tell.

‘’Is this the real life? Is this just halving? Caught in a bull run, no escape from reality.’’

Yes, people, BTC is on a serious bull run these days! In the previous edition, we talked about possible causes of the price jump and speculated on the fact this may be happening due to the halving which is only 4 days away now.

While some experts such as Anthony Pompliano are saying it’s only an increased demand thing and ‘not the halving pricing in’, we still can deduce that demand is higher due to the fact that people believe in BTC price skyrocketing after the halving itself. Sure, it’s not in a direct correlation, but human psychology is a funny thing. Again, very simple logic – supply goes down, demand goes up, and price to the moon.

Meanwhile, BTC continues to break resistance lines and, at the moment of writing, is worth $9,307 per coin. Remember, on March 13th we witnessed a big drop to $3,750. Now we are waiting for BTC to break the $9,500 level and watch what happens next. In just a few days we’re naturally expecting a decreased supply. But, what will happen to demand? Surely, every trader has his logic but a lot of necessary signs can come from following the trading volume. May the candles burn high!

Inevitably, the jubilee 40th edition of Anchor’s Crypto Roundup will include news regarding the post-halving crypto world, so make sure you’re at the right place a week from now!

Hi, Libra, long time no see! We’re about to redeem that since an interesting piece of news came earlier today from the Libra Association concerning the appointment of their first CEO.

So, who is it? It’s Stuart Levey, HSBC Chief Legal Officer, and former Under Secretary of the Treasury for Terrorism and Financial Intelligence during the presidencies of George W. Bush and Barack Obama. “I am honored to join the Libra Association as it charts a bold path forward to harness the power of technology to transform the global payments landscape,” Levey stated.

Taking into account his vast experience in finance and financial legislature, he could indeed be a valuable asset to the Libra Association, which clearly wants to play everything by the book. Seems like they found themselves a qualified man for the job. Maybe he will tell us what’s going on with the official launch and is it happening in the first half of 2020 as planned? Stay tuned nonetheless.

Facebook’s Libra had an enormous impact on the crypto community by steering the spotlight on our industry. With the good, comes the bad, too. Suddenly, everybody was familiar with the term ‘stablecoin’, and people have shown an interest in other projects as well. It also seems that Libra brought fire and brimstone raining on their heads since many official bodies, including the Financial Stability Board (FSB), practically started a stablecoin witch hunt.

Can official means of payment be issued by private companies and is there a way for governments and central banks to loosen their attitude towards this matter? My guess is that Mr. Levey is here to exactly find that out.

Cambridge University teamed up with technological experts and released a tracking tool dubbed The Bitcoin Mining Map, used for presenting the countries with the highest level of mining activity. If you’re thinking – okay, thanks, we all know it’s China – it’ll go a little bit more into details.

‘’The Bitcoin Mining Map visualises the approximate geographic distribution of global Bitcoin hashrate. The average hashrate share by country is available for display in monthly intervals starting from September 2019. In addition, a second map with an exclusive focus on China’s hashrate distribution by province is provided.’’

According to this map, the countries that lead in BTC mining are China, the US, Russia, Kazakhstan, Malaysia, Iran, Canada, Germany, Norway, and Venezuela. When it comes to Chinese provinces, the top 10 are Xinjiang, Sichuan, Nei Mongol, Yunnan, Beijing, Zhejiang, Shanxi, Gansu, Qinghai, and Ningxia.

If you are wondering how this works, here’s the official answer – The map is based on geo-location data (i.e. IP addresses) of hashers connecting to the Bitcoin mining pools BTC.com, Poolin, and ViaBTC.

Besides being interesting and insightful, this initiative also helps in bringing more transparency to crypto mining. Surely, we’ll keep an eye on this tool in months to come and observe if there will be any news-worthy change.

Logically, this edition of Anchor’s Crypto Roundup brought us mainly bitcoin-related news, which is expected due to the fact we are anticipating an important event in just four days! Rest assured, we won’t neglect other subjects and important occurrences in the industry in weeks to come.

From Libra to mines in China, this was definitely an amusing ride, folks! Don’t forget to stay safe and at home while this pandemic slowly abates. Also, feel free to share your thoughts with us regarding any of the topics mentioned above. I wish you fair winds and the following seas, fellow Anchorians!