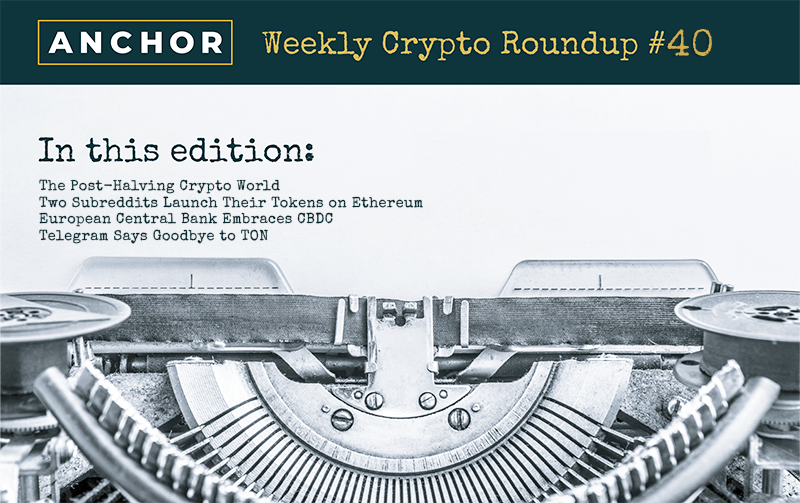 Wow, guys! Weekly Crypto Roundup celebrates its 40th edition this week! For 40 weeks in a row, we have been summing up the most important news for you, fellow Anchorians, and we will relentlessly continue to do so.  It has been a true honor for me and the Anchor team, and we would like to say thanks for your support! ⚓

Symbolically, in this major edition, we have one of the most important occurrences in the industry – the BTC halving, and we are going to reflect on that event shortly, of course. In any case, we have other updates, too – two major subreddits launch their tokens on Ethereum blockchain, CBDC developments in Europe, and crestfallen end of the story for Telegram’s TON. If you are anxious to learn more about these key topics in the crypto industry, you’ve come to the right place! Buckle up, it’s Roundup time!

Yes, it happened! The third-ever BTC halving occurred earlier this week, thus cutting the miner block reward from 12.5 BTC to 6.25 BTC. As you probably already know, we had one halving in 2012 and the other in 2016. And if you were wondering how many halvings are left, the answer is – this is meant to be happening until 2140. So, a century. Give or take. Interestingly, what these two previous events had in common is the fact that, after them, the BTC price skyrocketed. What will occur this time?

The basic numbers say – bitcoin was trading for $8,500 around halving time, and at the moment of writing, its price is almost $9,500. Is this enough for the new bull run? With the decreased supply, everything comes back on, well, demand.

And this demand will probably come from the countries struggling with financial crises, such as Brazil. Why Brazil? According to Cointelegraph, Brazil’s central bank reduced its interest rate to 3% and that, combined with the fact Brazilian real is drastically losing its value, will simply push investments away. According to Delphi Digital, a portion of this capital could easily end up in bitcoin, or in a stablecoin that managed to maintain value through the pandemic.

“This is not to say that capital flooding out of emerging markets will flow right into bitcoin… but the sheer size of this potential move could serve as another demand source for BTC, especially if tighter capital controls become more commonplace.”

Naturally, there are no completed transactions without the miners and this halving left many of them out of business due to the fact mining becomes more expensive with fewer awards. Nonetheless, while someone sees an exodus, others see an entrance, meaning we can probably expect a rise in BTC mining facilities in countries with fewer costs of electrical power and computer hardware. It’s probably too early to deduce how this concrete halving will affect the crypto industry, and the landscape will be clearer in months to come. And, yes, you guessed it, Anchor will be there to keep you posted!

Crypto enthusiasts and Reddit kinda go hand in hand, right? I mean, the term HODL was firstly created on Reddit after all. Anyhow, karma here may not be a b-word, but it seems as if Reddit wanted an upgrade regarding this matter.

The r/Cryptocurrency and r/FortNiteBR subreddits (that together have around 2.4 million users) announced their respective token launches last night. Tokens dubbed MOON and BRICK (okay, their call) were created on the Ethereum blockchain and will be stored in the official Reddit Vault, integrated into Reddit iOS and Android apps.

Plug-and-play could definitely be the approach here since these tokens are meant to serve as community tokens, enabling special membership and voting privileges. Fellow Fortnite Redditors said, concerning their token: “BRICKS can be traded freely and used for any number of purposes within the community. At this time, they can be used to display reputation within the subreddit, unlock exclusive features like badges and GIFs in comments with a Special Membership, and add weight to votes in polls.”

Though interesting, this piece of news should come as no surprise since, well, today we can tokenize practically everything. For example, some major football clubs in Europe, such as Juventus and Barcelona, have already issued their fan-coins that enable supporters to actively participate in clubs’ decisions.

Now, back to Reddit. Distribution of MOON and BRICK tokens will be left to the community itself, meaning you can send your tokens to someone else as a reward or simply because you want it. It seems that your karma points will influence the number of tokens, too. Reddit, of course, already had a reward-giving system, but this blockchain-based tokenization is something new for the network.

The only thing left to see is which subreddits will follow and if Reddit is preparing something bigger or even revolutionary here.

This virtual edition of the Consensus: Distributed conference by CoinDesk surely shed light on various topics. To me, two pieces of information immediately stood out. Firstly, and it’s official, less than 1% of FinCEN’s investigations in financial crimes were crypto-related. Secondly, the European Central Bank (ECB) announced upcoming updates regarding their CBDC. Since the first one is pretty much self-explanatory, we shall focus on the latter.

Executive member of ECB’s board, Yves Mersch, spoke on Monday about this institution’s plans on the further development of their central bank-issued currency. According to his words, around 80% of central banks worldwide are looking into developing their own digital currency, and ECB is no exception. Besides feeling FOMO, official bodies around the globe are starting to realize that digitization in finance is inevitable.

Mr. Mersch gave some specifics concerning their project, too: “A wholesale CBDC, restricted to a limited group of financial counterparties, would be largely business as usual. However, a retail CBDC, accessible to all, would be a game-changer, so a retail CBDC is now our main focus.”

The privacy-related issues still remain and here’s a simplified explanation – with digital currency transactions, the central body can know who, by name, bought a chewing gum at this precise moment. DLT, somehow, is still not an option here.

While digital developments are praiseworthy, one can’t help but wonder what central banks are ready to do to win this virtual money battle with the private companies. We can only hope that the price is not our privacy.

Tuesday was a sad day for Telegram and crypto community altogether, but a happy one for the SEC – TON blockchain project is now officially dead.

“Today is a sad day for us here at Telegram. We are announcing the discontinuation of our blockchain project. Below is a summary of what it was and why we had to abandon it,” said Pavel Durov, Telegram founder. He wrote a blog post explaining how this happened and shared his point of view:

Unfortunately, a US court stopped TON from happening. How? Imagine that several people put their money together to build a gold mine – and to later split the gold that comes out of it. Then a judge comes and tells the mine builders: “Many people invested in the gold mine because they were looking for profits. And they didn’t want that gold for themselves, they wanted to sell it to other people. Because of this, you are not allowed to give them the gold.”

We can all correlate with Durov’s bitterness and disappointment, but the law is the law and it must be respected. Sadly, executive, legislative, and judicial branches of government in the US are still against crypto, and there’s not much what we as enthusiasts can do about it. Telegram led a long court battle with the SEC, as we’ve been mentioning in some previous Roundups, and unluckily for them, ended up as the losing party. Pavel Durov shared a powerful message at the end of his blog post, the one we should probably hear out:

I want to conclude this post by wishing luck to all those striving for decentralization, balance and equality in the world. You are fighting the right battle. This battle may well be the most important battle of our generation. We hope that you succeed where we have failed.

Once more, we are at the very end of another exciting edition of Weekly Crypto Roundup! I don’t know about you, guys, but while writing this one I felt both hopeful and sad. The progress of our industry is evident and we should all feel so proud! Then again, there are many battles ahead of us and we should arm ourselves with common sense and endurance. We’ll need them!

Again, thank you for being a careful reader for these past 40 weeks – we will surely give our best to live up to your expectations, fellow Anchorians! And let’s raise our glasses to all the good news and good weeks to come!

Only fair winds and the following seas for you, guys. Stay safe and we’ll see you in 7 days!