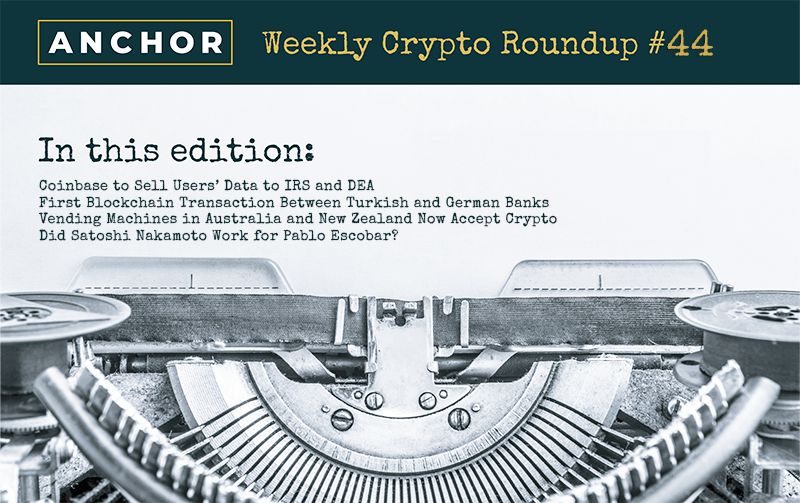 Hello, my dear Anchorians, and welcome to another edition of Weekly Crypto Roundup! It’s never easy to pick ‘’the fantastic 4’’ when it comes to news pieces, you know, but we all have our crosses to bear. Unfunny jokes aside, blockchain and crypto never cease to amaze us, and that’s why this industry is so captivating.

Nonetheless, I bet we all have those friends and family members who are quite unsure of what crypto is all about. They still have an opinion, though, and usually, it’s something like ‘’that’s not real money’’ and so on. Some of them are even presidents of sovereign countries, but let’s not go there. The best solution is to simply show these people some valid real-world use cases. And that, my fellow Anchorians, is one of my main criteria when it comes to news selection.

Now you know my big secret but we’re friends and you won’t tell, am I right? Look at me, I’m just blabbering while there are some important events to break down. Okay, okay, we’re diving in straight away!

Coinbase to Sell Users’ Data to IRS and DEA

Powder me in sugar and call me a donut! Is Coinbase really working with government agencies? Well, technically not yet, but they are about to – and here’s the tea.

“As law enforcement techniques evolve and other cryptocurrencies gain acceptance, criminals are using other types of cryptocurrencies, not just Bitcoin to facilitate their crimes. In addition to the Bitcoin Blockchain, Coinbase Analytics (fka Neutrino) allows for the analysis and tracking of cryptocurrency flows across multiple blockchains that criminals are currently using. […] This action will result in a Firm Fix Priced purchase order, Period of Performance: One base year from date of award with one 12-month option.” , IRS document explains.

While Coinbase claims that ‘’Coinbase Analytics data is fully sourced from online, publicly available data, and does not include any personally identifiable information for anyone’’, this data will give government agencies enough material for a potential warrant if suspicious activity is detected, and Coinbase will have to comply.

As Ivan on Tech said, companies have two choices when it comes to users’ data – to profit on selling it, or to give away as little as possible in order to protect their customers. Let’s not forget that Coinbase already has issues with outages, so a logical question pops up – why would users even choose Coinbase now?

Of course, nobody wants to be an enemy with the government and laws must be respected, but proactivity in offering data for money is, well, simply not cool. And, to be honest, it’s not even that much money – e.g. DEA can pay between $10.000 and $250.000 for limited resources.

Anyway, there’s not much that we can do except choosing another exchange if we disagree with Coinbase’s actions. Stay tuned for updates!

Hip hip hooray for the first-ever international trade transaction between Turkey and Germany on blockchain! The protagonists: Turkish İşbank and German Commerzbank. No surprise for Turkey since we’re already familiar with this country’s efforts to implement crypto and blockchain into everyday life. The platform that was used in this transaction, which occurred on May 27th, was R3’s Corda.

“Now, with this pilot transaction using blockchain technology, we are starting a reliable and easier period based on matching data in foreign trade”, said Şahismail Şimşek, İşbank’s Deputy Chief Executive.

Blockchain-based transactions could be a new trend in the ‘’old’’ world of finance due to the technology’s efficiency and ability to reduce costs. Again, Turkey is a well-know pro-crypto country, with friendly regulation towards cryptocurrencies. There have also been talks about the creation of digital lira (their CBDC), which is due to happen by the end of 2020.

Naturally, Turkey’s not the only country with this proactive mindset. We also have a positive example coming from Saudi Arabia where recently SAMA, the country’s central bank, has transferred funds to local banks using blockchain technology. The Saudi Arabian Monetary Authority (SAMA) is very keen on adoption of blockchain technology, and in 2019 they led an initiative to implement blockchain in the remittance sphere.

Around the globe, central banks and banks in general are slowly but surely taking the path of DLTs and, more precisely, blockchain technology. The pros simply outweigh the cons in this case! We can already determine the leaders in this area and wait to see which countries will follow.

No coins, no soda? Wrong! Vending machines in the Asia Pacific zone will now accept crypto as a means of payment. This service will be provided by Coca-Cola Amatil, a major soft-drink bottler and distributor, via Centrapay.

2.000+ vending machines in Australia and New Zealand will now be equipped with QR code payment stickers that can be scanned by smartphone cameras. In order to complete the purchase, you’ll have to have Sylo Smart Wallet installed on your phone. Sylo Smart Wallet is both a hot wallet that supports storing BTC and ERC-20 tokens and a private messenger app.

The idea behind this initiative is to reduce physical contact in retail locations due to the COVID-19 pandemic and the current health crisis. However, the plan is to expand on other continents, too:

“Now we’ve shown how it can work in Australia and New Zealand, we’re looking to grow the business globally. We’ve established a presence in North America and will be targeting the U.S. market next,” said Jerome Faury, CEO of Centrapay.

It always feels good to celebrate these steps towards mass crypto adoption – and many enterprises worldwide now recognize that they can benefit from implementing crypto into their business operation. Buying Coke with crypto may seem like a small step, but an abundance of these small steps will generate an inevitable and powerful trend.

We have a new theory regarding the BTC creator’s identity! Who is Satoshi Nakamoto? A question with a million answers. Reportedly, Satoshi Nakamoto is actually Yasutaka Nakamoto, an ex cocaine smuggler for Pablo Escobar. And here’s the interesting part – this Nakamoto disappeared off the face of the Earth in 1992, after surviving an assassination attempt.

Who told this story? Well, it was Olof Gustaffson, Swedish entrepreneur and CEO of Escobar Inc, a multinational conglomerate from Colombia. Yasutka was the head engineer for Pacific West Airlines before he turned to the Medellin cartel and thus became Escobar’s confidant. Also, Yasutka is allegedly the brother of Dorian Nakamoto, a suspected Satoshi in 2014.

Roberto Escobar, Pablo’s brother, is also somehow involved since he met with Dorian, who is well familiar with his brother’s invention. Confused? Well, that makes two of us. Be that as it may, BTC in this manner solved a big issue for drug traffickers – the money flow. Do you know that scene from ‘’Narcos’’ when the narrating detective says that the problem was never to export the cocaine to another country but to import the cash back?

It seems like we’ll never know for sure. Yes, bitcoin could have been created by some drug lord or his assistants, but the creator could also be a young programmer from Fiji or a tech-savvy retired police officer from Madagascar. Conclusion? Anyone who claims that he/she is Satoshi Nakamoto is probably not Satoshi Nakamoto since Satoshi wanted to be anonymous in the first place.

It’s always fun to compare these theories nevertheless. Which one is your favorite? Share with us in the Anchor Project Community on Telegram >>

So, my fellow Anchorians, we’ve come to the end of another Weekly Crypto Roundup. This 44th edition definitely brought some good news in terms of crypto and blockchain adoption, along with one interesting Satoshi theory. And now our watch has ended. For this week, I mean.

I hope that you all are safe and well while this 2020 continues to bring new challenges. The world of crypto, however, prevails and so does its global community. Let’s keep up with that! Until next week, I wish you fair winds and following seas, my friends.