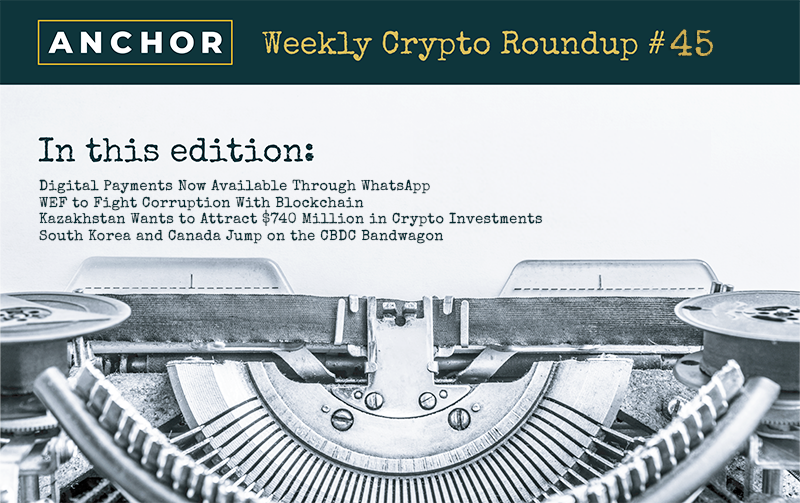 Ahoy, fellow Anchorians, your 45th edition of Weekly Crypto Roundup is ready to set sail! There are so many exciting news pieces in this week’s article, and I want to thank the gods of crypto for a fruitful week. Now, you may not be half as thrilled as I am, but that’s alright, you’ll change your mind swiftly.

The motif in the entire Roundup is pretty much the same – ‘’conventional’’ entities meet crypto. And we always love to hear that, don’t we? After all, we can’t drive mass adoption alone. Naturally, we have to tackle the issues that remain here, so not everything is bright and shiny, but overall the impression is – we’re definitely moving forward as an industry.

Okay, you’re right, I should leave the final verdict to you, guys. Even if we agree to disagree, you know I’m always open to discuss everything with you in our Telegram Community. So, without further ado, let’s jump right in!

Will Facebook Pay finally pay off? Brazilians using WhatsApp to send money will promptly let us know. The Facebook-owned messaging platform announced earlier this week that ‘’starting today [Monday] we’re bringing digital payments to WhatsApp users in Brazil. People will be able to send money securely or make a purchase from a local business without leaving their chat.’’

So, why Brazil? WhatsApp had been testing its digital payment system in India for months from a technical standpoint, but it seems as if the regulation was more favorable in the biggest Latin American country. Digital payments through WhatsApp are just part of a wider idea, Facebook Pay, that will enable users to send fiat money via Facebook, Instagram, Messenger, or WhatsApp using PayPal or their credit cards.

Okay, let’s address the elephant in the room now, please. Libra, hi! While Facebook’s official policy states that Facebook Pay is not a substitute for the Libra project, let’s quickly go over the facts again. Facebook introduced us with its new digital payment system in November 2019, so not that long ago, and months after the Libra announcement. Sure, Libra is aiming to solve a different type of issue, which is (un)banking, and while the two systems are apples and oranges, we can’t help but draw parallels here.

Let’s face it – we rarely witness unity in anything on a global scale, but opposing Libra was one of those things. Sovereign countries say no, central banks say no, the entire traditional banking system says no. So, what do you do then? Keep the goal, but change the tactics. Facebook, logically, can’t resist entering the digital payments sphere since it already has a) a perfect infrastructure and b) billions of active users.

It seems like the golden rule here for the ‘’big guys’’ is this – you can serve as a payment platform, no worries there, but you simply cannot issue your own, private currency. And, yes, if social media platforms could swimmingly issue and use their respective digital currencies, what would happen to national fiat currencies? Remember what happened to Telegram’s TON. They lost the battle with the SEC because they wanted to use their own currency, Gram.

While the middle ground between fiat and crypto is yet to be determined, the progress is inevitable at one point. They will probably meet soon in DLT-based CBDC projects but, for now, the overly rebellious ones will face Icarus’ fate.

WEF to Fight Corruption With Blockchain

Corruption is such a foul thing, am I right? Well, the World Economic Forum agrees, and they want to put a stop to it. How? By utilizing blockchain technology, of course.

Government procurements and tenders can be tricky in the public sector, data gets lost, money can be shifted, etc.  With blockchain, the records are pretty much sacredly sealed. The WEF has already recommended blockchain to supply chains through its new toolkit, and now they are looking for another useful use case for this type of technology – fighting the notorious corruption.

And they’re starting in Colombia with an initiative dubbed Transparency Project: “The project developed a blockchain-based software proof-of-concept, or PoC, for public procurement that intends to be tested in a live procurement auction in Colombia in 2020.”

Firstly, the software will be tested on a Colombian public education food program, which previously had issues with foul play. Decentralization and smart contracts can definitely be beneficial for both the public and private sectors since they help in raising transparency.

“The project chose to focus on the public procurement process because it constitutes one of the largest sites of corruption globally, stands to benefit from these technology properties and plays a significant role in serving public interest.”

Isn’t it wonderful to see how blockchain technology can literally change the world? Though it’s technically nothing more than lines of code, it can tackle so many issues if used right. And all we have to do is deploy it.

Look, guys, sovereign countries and crypto can be friends! The government of Kazakhstan definitely sees the benefits of embracing the crypto industry and wants to attract $738 million from cryptocurrency investments in the next three years, particularly in mining activities.

“According to the report that we have prepared with international experts, we expect another 300 billion tenge (US$738.4 million) in the next three years as digital investments and in general, the further development of digital mining,” said Askar Zhumagaliyev, Kazakh Minister of Digital Development, Innovation and Aerospace Industry.

And mining is indeed booming in this Asian country, with 14 currently active crypto mining farms that have already brought around $200 million worth investments. What else is good news? Crypto mining in Kazakhstan is tax-free. Your income is your thing, and you’d be liable to taxing only if your income is generated specifically in fiat.

While some countries such as Russia want to limit crypto-related activity, others see the benefits of implementing it into the national economy. Policymakers, of course, have the right to choose the best possible direction for their countries, but we always love to see pro-crypto narrative, don’t we? Surely, we’ll keep you posted regarding this topic!

South Korea and Canada Jump on the CBDC Bandwagon

Clearly, CBDCs are such a growing trend these days! Lately, two countries have popped up with new project ideas – Canada and South Korea.

Let’s start from Canada – after two years of research and planning, this North American country is now preparing to create its official central bank digital currency. And how do we know this? Canada’s central bank shared a job posting on their website, and they’re looking for the project manager!

‘’The Bank of Canada is embarking on a program of major social significance to design a contingent system for a central bank digital currency (CBDC), which can be thought of as a banknote, but in digital form. This project will require us to break new ground. It will take into consideration a wide variety of factors, including policy considerations, diverse stakeholder needs, difficult technical challenges and the development of a technical architecture to realize a CBDC pilot system. ‘’

Additionally, on the other side of the Pacific, South Korea is moving ahead with its own CBDC research. The Bank of Korea has formed a team of legal, financial, and tech experts to tackle the potential issues regarding the creation of their digital currency.

“We established the advisory group to discuss legal issues surrounding a CBDC and figure out which laws need to be revised or enacted for smooth progress in the BOK’s possible issuance of digital currency,” a BOK official said. Why now? Logically, others are doing it, too.

A lot of countries are now showing progress in their CBDC projects – at first everyone was shyly keeping an eye on this phenomenon, but soon some central banks around the world decided to take it on another level. Lately, a lot of Roundups have come with some CBDC-related updates and I believe we can expect even more in the near future!

So, what do you think? Are we moving forward as an industry? I would bet on it. As I said, there is some middle ground between traditional bodies and the world of crypto, we just have to keep an open mind. Collaboration between these two can be beneficial for everyone and I’m glad to see the progress.

Now, there will inevitably be some ‘’bad’’ news in weeks and months to come, but that’s all an essential part of the journey. No matter what, you know who will be there to share it with you! As we come to the end of this week’s Crypto Roundup, there’s only one thing left to say – I wish you fair winds and the following seas, my fellow Anchorians. Until next week!