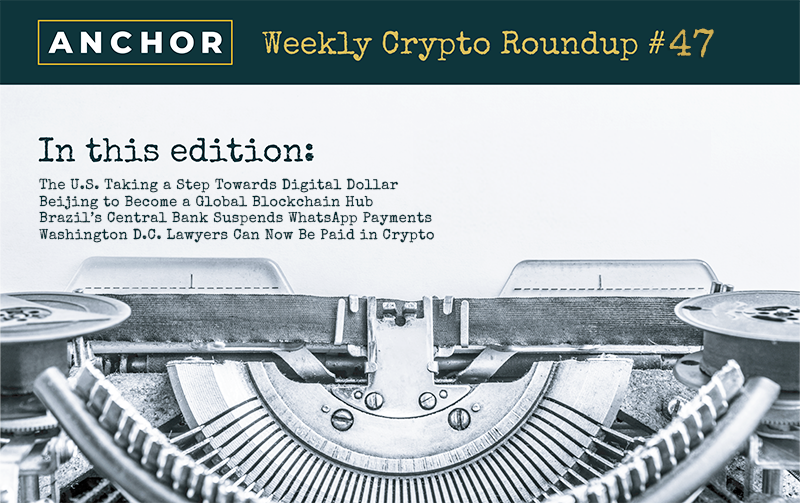 Hi, y’all and welcome again! I don’t know about you but sometimes, I have a feeling as if an entire decade flew by between these Roundups of ours. On the other hand, a week can go by in the blink of an eye, too. One thing is certain in both cases though, the world of crypto never fails to deliver amazing news.

As you can see, this 47th edition brings us various legislative news from different continents. We also have several respective topics – CBDCs, blockchain, digital payments, and payments in crypto. Should be interesting, right? Well, that one is for you to decide. You know I always love to hear your opinion in our Telegram Community, so feel free to discuss the latest crypto news there. Okay, my fellow Anchorians, let’s dive into another Weekly Crypto Roundup now!

The U.S. Taking a Step Towards Digital Dollar

Admit it, when it comes to CBDCs, we are all anxious to hear what is happening with the digital dollar. It’s only natural since, well, the global economy is tightly correlated with the American economy. Be that as it may, the U.S. is still in the early planning phase but things could change soon.

Countries like Sweden and China are taking their projects very seriously, and for now, they seem to lead the whole CBDC narrative. Perhaps that’s one of the main reasons why the issuance of a digital dollar is being considered in the States – a possibility of digital yuan becoming the currency in international trading and emerging markets.

Just a couple of days ago, on June 30th, the Senate Banking Committee held a hearing regarding the future plans for the digital dollar. Charles Cascarilla of Paxos was there to defend the honor of blockchain-based stablecoins while senators expressed their concerns and sympathies. Besides Cascarilla, expert witnesses were also Chris Giancarlo and Nakita Cuttino.

Chairman Mike Crapo (R-ID) said how stablecoins could provide an efficient alternative to traditional financial solutions, but also expressed his concerns in terms of their regulation.

The most encouraging fact, besides this being an actual public debate, is that no one was actually against the idea. Some concerns remain, sure, but we didn’t hear the usual bashing and strong protests. Is it corona, the Chinese, or something else? We can’t know for sure but the U.S. is certainly getting closer to their central bank digital currency.

Once again, China is showing a strong interest in becoming a global technological leader. The “Beijing Blockchain Innovation Development Action Plan (2020-2022)”, the country capital’s blockchain adoption plan, has been approved by the municipal government. In this manner, Beijing is envisioned to become not only the national blockchain hub but also the global one.

We are talking about both private blockchain innovations and public DLT deployments. The government, besides its own funding, wants to bring the DLT unicorns and in that way ensure its supremacy when it comes to the blockchain technology use cases.

The Action Plan is surely ambitious and perfectly illustrates China’s position on blockchain – this Asian country acknowledges that blockchain is both the future and the present of technology. If successful, this plan will have a vast influence on the global political landscape since other countries might feel the pressure to act, too. Only time will tell!

Remember when we talked about the launch of WhatsApp payments in Brazil? Well, maybe we jinxed it – Brazil’s central bank has ordered Visa and Mastercard to suspend the money transfers for Facebook-owned WhatsApp.

Why? Well, apparently “to preserve an adequate competitive environment”. Makes sense though, why would you go an extra mile to send or receive money when it’s already integrated into the apps you use every day? Additionally, Brazil’s Administrative Council for Economic Defense suspended the agreement between Facebook and local company Cielo to process payments for WhatsApp.

Nonetheless, that suspension was soon reversed but the central bank’s ban remains. While both Facebook and Cielo state they will respect any official decision, this has certainly messed with their ambitious plans.

If Libra was labeled as ‘’dangerous’’ due to the fact it’s a privately issued currency, then what’s exactly wrong with Facebook’s subsidiaries being used as payment platforms for fiat transactions? In this case, Brazil’s central bank claims it’s only trying to protect the market from the ‘’giant’’.

Bad luck and resistance – these two seem to follow Facebook since the moment they announced their interest in the sphere of digital payments. I don’t know what’s more unlikely though – that official bodies will back off or that Facebook will give up. At one point, somebody’s gotta win.

Washington D.C. Lawyers Can Now Be Paid in Crypto

If your lawyers are from the U.S.’ capital, you can now pay them in crypto, as long as ‘’the fee agreement is fair and reasonable and the lawyer can safeguard the virtual property’’, according to Bloomberg Law.

Cryptocurrencies are, in that manner, recognized as the lawful means of payment for legal services in Washington, D.C. However, it’s important to acknowledge that bar associations in North Carolina, Nebraska, and New York City have already approved crypto as payment for legal fees, making D.C. the fourth in the line. Will others follow? Let’s see.

The District of Columbia Bar highlighted two major things. Firstly, fees have to be ‘’reasonable’’, meaning you can’t simply transfer 1.000 BTC to your lawyer just for an hour of their time. While you can privately value your legal representatives this much, this condition is meant to prevent any malversations. Secondly, lawyers must be competent in blockchain, in order to ensure the safety and protection of all advance fees.

If you can pay in crypto for various goods and services around the world, why couldn’t you pay your lawyer in the same manner? While seeming ‘’small’’ at the first glance, initiatives like these are exactly what we need in order to drive mass crypto adoption. You can now both buy Coke and pay your divorce lawyer in crypto – the times are indeed changing.

Are you still here? Then well done, champ, you’ve made yourself more knowledgeable than you were 10 minutes ago.

This edition was, in a way, eclectic but it also illustrated a constant in these stories – crypto is so much more now than it was a decade ago. From an almost occult hobby for a small number of enthusiasts, crypto and blockchain are now being welcomed by governments and private enterprises. But that’s a true crusade, right? All it took was an idea.

Anyhow, my dear fellow Anchorians, this is the very end of another Weekly Crypto Roundup. Until next week, I wish you fair winds and the following seas!