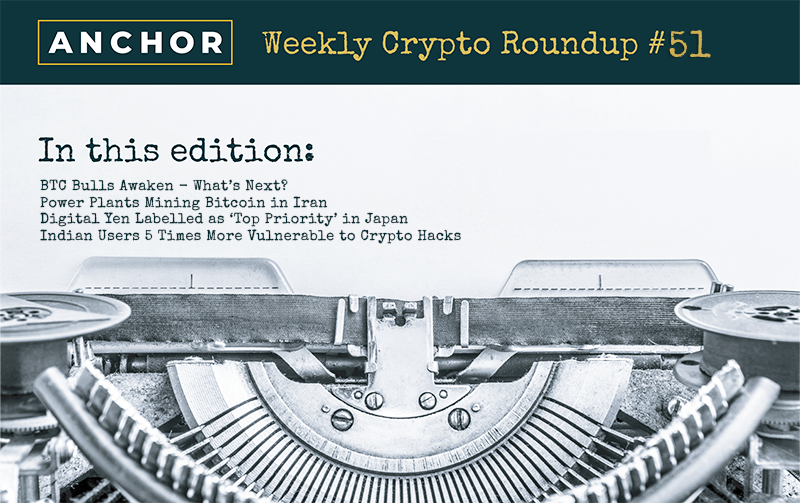 Oh, my fellow Anchorinas, how are you feeling? It’s almost August now, which means we’ve endured another month of this crazy year. Well done, champs! Moreover, this July was particularly kind to crypto, bringing some good news indeed.

Of course, we shall talk about the recent BTC price movement, along with the worldwide (well, actually more like Asian) updates for our community, with important news coming from Iran, Japan, and India. Since we’re not exactly in a position to travel at the moment, may this be our window to the world for now.

For the 51st time, we’re diving into our Weekly Crypto Roundup! Also, if you want to share your views on current events in the world of crypto, feel free to join our Anchor community. Now, let’s go!

At the moment of writing, the BTC price is lingering around $11k. On July 26th, the price unexpectedly jumped to $10.200 and continued to rise, breaking the 11k line. I bet my BTC hodlers are over the moon, am I right?

We all know that Bitcoin can always surprise us in terms of price movement, but this time, it was a pleasant surprise. Many crypto enthusiasts wonder what happens next, so we’ll try to understand the logic behind this occurrence together.

The first step in this story was, of course, a sudden jump from $9.7k to $10.2k. Now, you might think ‘’it’s only 500 bucks’’, but $10k is an important psychological barrier for traders and hodlers. After that, the trading volume rises and the market does its dance, determining new support and resistance lines.

Historically, the $11.5k level has been a major resistance line for BTC, and breaking this limit would suggest significant further price growth. Naturally, rejection could indicate a bearish scenario later on.

Guessing the exact reasons for sudden BTC price movements is never easy, but the market has its logic, of course. For now, we can observe support and resistance and look for clues. Good luck, traders!

Yes, you read correctly, power plants in Iran are now authorized to mine BTC, provided that they don’t use subsidized power for it. Nuclear plants can indeed efficiently supply the electricity, so this idea sounds reasonable, but logically it has to be regulated.

Just a reminder that in 2019, the Iranian government authorized crypto mining as an approved industrial activity. Previously, Iran had licensed 14 mining farms, cutting electricity tariffs up for 47%. Additionally, Iran wants to deal with illegal crypto mining farms, encouraging people to report these activities for a reward.

Iran and crypto have a hot-and-cold relationship for years, with various restrictions installed. It seems as if Iran was not against crypto, but wanted to be in control of all crypto-related activities in the country. Mining is desirable, though.

Hassan Rouhani, the country’s president, has also expressed interest in creating a Muslim cryptocurrency with Malaysia and Turkey. He is not the only leader that recognizes the role of cryptocurrencies in the global economy, since many countries have turned to the idea of sovereign or regional digital currencies.

Now I’m being Captain Obvious, but CBDCs and cryptocurrencies are surely not the same things, though their emergence illustrates the shift in financial landscape worldwide. While various CBDC projects have existed for years, it was the rise of Chinese digital yuan that made the ‘’rivals’’ think about this topic, too.

Now the Bank of Japan insists on the development of digital yen, making it a top priority in the central bank’s policy.  “We will move forward with discussions while pushing up the level of consideration beyond the preparatory stage,” said Takeshi Kimura, BoJ’s senior official.

While the timeline is still unclear, Kimura announced cooperation with the private sector which ‘’has more in-depth technical knowledge about the issue’’.

Many fear that Chinese CBDC, digital yuan, would easily take over global dominance from the American dollar. It is no secret that China has big ambitions and wants to be on the top in the new world order. This fact made even the U.S. consider and urge the development of the digital dollar. Furthermore, the ruling party in Japan, the Liberal Democratic Party, stated that ‘’China’s global leadership in CBDC development could become a national security threat’’.

The Japanese seem ready to pursue their CBDC story and I’m sure we’ll see significant improvement in months to come. Of course, we’ll keep you posted on other national digital currencies since this is the rising trend of 2020.

According to Microsoft’s latest cybersecurity report for the Asia Pacific region, users from India and Sri Lanka are far more likely to encounter a crypto-mining attack than the others.

‘’India recorded a cryptocurrency mining encounter rate that was 4.6 times higher and drive-by download attack volume that was three times higher than the regional and global average,’’ the report states.

Basically, this type of crypto-mining malware enables the hacker to hijack your computer and use its electrical power for mining purposes while you don’t even know about it. After India, the risk is highest in Sri Lanka and Vietnam.

Asia Pacific region in general is the leader in malware and ransomware encounter rate, with 1.7 times higher rate than the global average.

While this news saddens us as members of the crypto community, it’s extremely important to raise awareness on this issue!

An interesting edition of Weekly Crypto Roundup is now behind us. From BTC price rollercoaster to hacking in India, we definitely covered many bases in terms of important topics for the community and industry as a whole.

I’m very excited to see what will happen to BTC in the next few days and to find out if the $11.5k line will really be impregnable this time. I do not doubt that there will be many exciting events in the world of crypto in the week to come. All of that will be waiting for you in the 52nd edition of our Roundup. Until next week, I wish you fair winds and the following seas, fellow Anchorians!