Ban Lifted in Russia, E-Voting on Blockchain in India, BTC’s Dance With $12k, Nigerians Embrace Crypto as a Means of Settlement 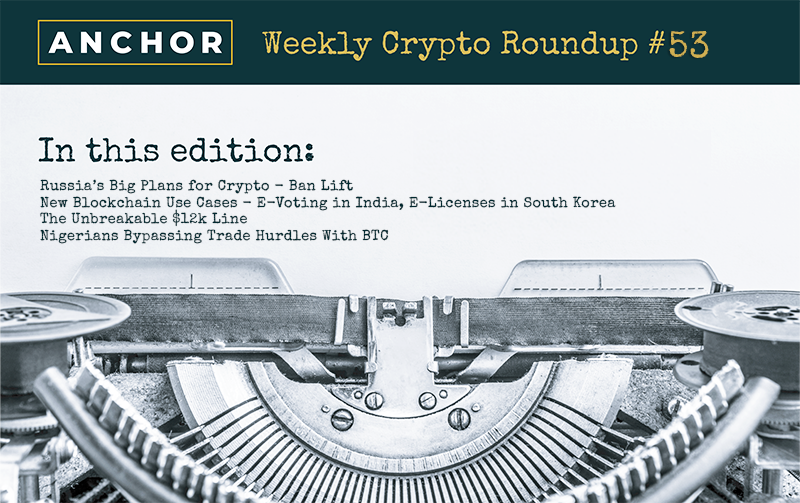 Ahoy, my fellow Anchorians! As you can see from the news I’ve chosen for this week’s edition of our Weekly Crypto Roundup – we are going on another worldwide adventure! One of the most amazing things about crypto is precisely its vast global influence, due to its decentralized nature.

From Russia to Nigeria, over India – we’ll be reflecting on the most important events in our community. Additionally, we talk about the strong $12k resistance line for BTC and what could happen next with its price.

In the meantime, let’s encourage ourselves with the fact this year is finally ending in a little bit over four months, so we can hopefully soon focus on our plans for 2021. Now, without further ado, the 53rd edition of Anchor’s Roundup is ready for you!

It seems to me that the world’s largest country is an inexhaustible source of news for our Roundups and the crypto community in general. Lately, there has been much noise in the ether coming from Russia. So, what’s going on?

First of all, the crypto ban is lifted! Starting January 1st, 2021, cryptocurrencies will be allowed in Russia, according to the newest crypto-regulating law. Some restrictions, however, remain. Russians won’t be able to exchange their crypto assets for goods and services, but they will be allowed to trade cryptocurrencies on exchanges, mine them, and own them without any legal consequences. The bottom line is – with President Putin’s signature, cryptocurrencies gained an official, legal status.

Another exciting piece of news caught my attention. Russia’s state-owned Sberbank launches a blockchain platform on Hyperledger and even plans on issuing its own stablecoin on it. Again, the government of Russia owns Sberbank, but the issuance of a national digital currency is usually the central bank’s job. To be honest, the line between public and private has always been blurred in Russia, but this stablecoin wouldn’t be a privately-issued currency though it wouldn’t be issued by the central bank either.

Be that as it may, this is quite an interesting narrative with a significant potential for growth. We shall continue to follow these occurrences in Russia and keep you posted!

The idea of an e-voting blockchain platform is not new, but considering the current situation with the COVID-19 pandemic, it could become a real option in elections to come. The State Government of Telangana, one of the states in India, plans to develop a blockchain platform for voting, both on the local and national levels.

Jayesh Ranjan, Principal Secretary of Information Technology, spoke on a webinar dubbed Exploring Blockchain for Remote Voting on Monday: “There should be a need for this particular technology. One needs to demonstrate that particular deficiencies can be addressed using blockchain and remote voting.”

India is pretty keen on scaling up e-voting, and its government is already consulting tech experts to achieve this. Telangana is somewhat of a blockchain hub in India, with unhidden interest in the use cases of blockchain technology.

Those use cases are indeed numerous, and India is not the only country embracing them. In the meantime, one million drivers in South Korea now have licenses issued on a blockchain! This project is led by the National Police Agency, in collaboration with other government agencies.

The idea is to replace traditional driving licenses with a digital alternative, with a combination of blockchain technology and a PASS smartphone app. The future really is now; it seems. India and South Korea are joining many countries, organizations, and enterprises embracing the benefits of blockchain.

The BTC bulls have been running for some time now, but may it be time for the bears to take over? While Kraken predicts a 200% growth in price, some fear that another rejection of $12.000 could indicate a possible bearish trend.

Most traders, however, remain optimistic about the future price movements, indicating the trend is still and will continue to be bullish. Scott Melker, a well-known crypto trader, encourages: “It’s dip buying season and that any chance to grab a higher low is welcome. This is a bullish chart, period.”

While many crypto veterans love to joke with the famous Fight Club line ‘’The first rule of Bitcoin is: You never sell Bitcoin’’, it’s 2020, and the market now offers many solutions to preserve your BTCs and even enhance them.

Of course, we would all like to see another big jump in the price, and perhaps that’s coming very soon for all the hodlers. Be careful, though, because the best thing about Bitcoin is also the worst one – unpredictability. If you’re an experienced trader, then this isn’t exactly your first rodeo, and you can somewhat know what to expect. Nonetheless, if you’re new to the crypto world, then grab your popcorn and don’t blink!

Everyone feels something in the air these days – people are hodling BTC expecting its price to keep rising.  But what happens if nothing happens? Do you have your hedging strategy in place? Cryptocurrencies and Bitcoin as their leader are the future, but we all know this isn’t always a straight road, it’s more of an adventurous journey.

Anyhow, good luck to all my traders and holders, and may we have some good news to discuss in the weeks to come!

Your country may for instance impose trade restrictions and sanctions on another country, but having BTC as an option for means of payment kind of annulates those restrictions for the persistent ones.

There is a rising trend in Nigeria – entrepreneurs are now increasingly using Bitcoin as a means of settlement with China due to its efficiency and speed. Banks have daily limits and tiring additional steps while a simple BTC transaction is quick and illimitable.

And this was at the very core of Satoshi’s initial idea – to liberate the people from the reins of traditional bodies. While Nigerians gladly utilize this alternative, one question remains.

Can BTC, despite its daily price fluctuations and constant volatility, become a widely-accepted means of settlement? Bitcoin has so much more to offer than fiat currencies, that’s for sure, but are other cryptocurrencies, e.g. stablecoins, a better option for everyday transactions?

Ideally, something such as ‘’a global stable currency’’ would solve all of our problems. However, it seems that traditional financial markets are still very opposed to that idea. While they remain opposed, the demand for alternative currencies and payment methods rises. The big change is inevitable, but what kind of change is yet to be seen.

The end of the road, guys! At least for now. You know very well that your favorite Weekly Crypto Roundup is going to be here at the same time next week, too.

What was the most interesting part of the 53rd edition for you? Feel free to share in Anchor’s Telegram Community.

It never ceases to amaze me how far has crypto gone in just over a decade. While most people took cryptocurrencies for granted at first, now entire sovereign countries are developing crypto strategies and considering the issuance of national digital currencies. Just imagine all the good things waiting to happen in the years to come.

While we’re waiting for them, the only thing left to say is that I wish you fair winds and the following seas, my fellow Anchorians!