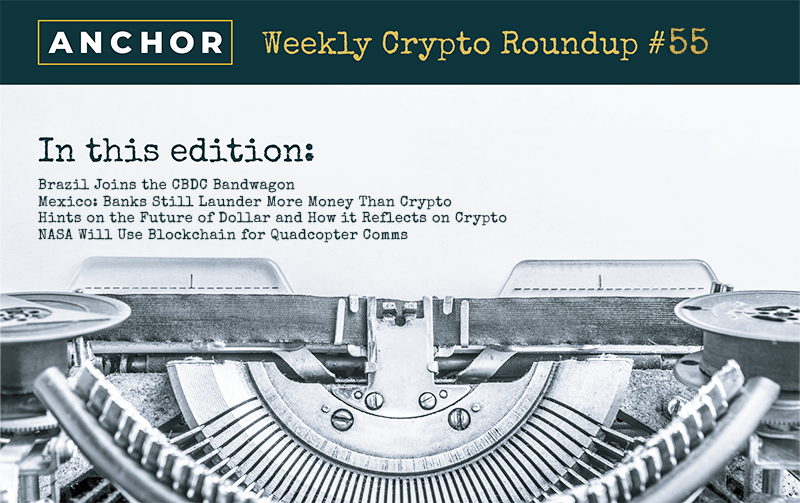 My dear fellow Anchorians, welcome to the 55th edition of Weekly Crypto Roundup! Once again, we leave such an exciting week behind us with many major news pieces to share. While e.g. a BTC hodling whale finally decided to sell its assets and Celsius Network did a great job via crowdfunding, there is only so much one can put in a Roundup.

This year, CBDCs are springing up like mushrooms after a rain, and today we talk specifically about Brazil and potentially the US. We are also addressing the fact NASA will soon use blockchain technology, and that the traditional banking system still launders more money than crypto (while we end up with a bad name, huh).

No worries, we will swiftly go into details about these important events but for now – buckle up, another Anchor’s Roundup is ready for you!

Hmm, let’s see – in our previous Roundups, we mentioned many countries developing their central bank digital currencies: Japan, South Korea, Canada, Sweden, the US, and of course China. The interest especially grew during the COVID-19 pandemic crisis when, naturally, besides people’s health, governments had to think carefully about their economies.

The newest member of this growing CBDC family is the biggest Latin American country – Brazil. The Central Bank of Brazil (Banco Central do Brasil) released an official statement saying a group of experts has already been put in place to determine the future steps.

“The subject of digital coins issued by central banks has been on the research agenda of many central banks for some time, however, this year, there was a greater focus in a more practical approach. China has already entered the final testing phase of its digital currency and many monetary authorities have announced new projects,” said Rafael Sarres de Almeida from the central bank’s Information Technology Department.

This working group was established by Banco Central to develop the proposition of a digital currency issuance model, with risk identification, including cybersecurity, data protection, and normative and regulatory adherence.

The idea is to save money while changing the game – no more printed bills which cost Brazil around $16 billion on a yearly basis.

Though still in an early stage, this initiative proves a peaking interest in CBDCs. Nobody wants to finish last since some prominent projects are entering their mature phases at the moment, and the competition continues to rise. It’s always good to see the global financial landscape changing for the better, nonetheless.

One thing is certain, Brazil is not the last country to join the bandwagon and I’m sure we can expect more newcomers in months to come. You know who will surely keep you posted!

People who are against cryptocurrencies have a tendency to label them as ‘’a perfect tool for illicit activities’’ as if every person trading crypto had intentions to launder their money in this manner. Well, we all know these illicit activities were happening long before Bitcoin emerged and they are still occurring as we speak.

Additionally, the blockchain and financial technology industries in Mexico have doubled in size during the last two years, proving this Latin American country is one of those open to changes.

Digitization of assets surely brings risks, especially since we are slowly, but surely turning to the world of only digital money. Nevertheless, sticking to the old way while hoping the change will never come is clearly not a solution. Governments govern as they see fit, and that’s okay, but the most important thing for an individual is to be able to protect his/her assets and to have a free choice of how to do so.

This year brought us some surprising collaborations between traditional banking and crypto and perhaps that is exactly where the future lies. Hopefully, Mexico will continue to live its crypto story and many countries should follow.

President Trump. The Fed. Inflation. We already sense this could become a short horror story. However, we would be lying if we said we weren’t interested in what’s happening with the American national currency. Busted, we care – potential growing issues will inevitably reflect on the entire global economy but… could this be good for crypto?

The end of this week will be marked by Federal Reserve Chairman Jerome Powell’s speech on measures to reduce inflation. Yes, the US’ current national debt equals $26.5 trillion, and $3 trillion of freshly printed money is surely an additional issue. More importantly, the dollar’s global supremacy is now in question according to Goldman Sachs. Just imagine for a moment that the dollar is no longer the world’s reserve currency. If I were to blame in case this happens, my mind would be 110% focused on finding the solution.

So, what’s the solution? Central banks and governments have their tactics for combating inflation but that’s slightly above our paygrade, friends. The question is – what can an average Joe do in this situation? The pattern is clear, and based on the Argentinian and Turkish scenario when you lose the faith in your national currency – you ditch it for Bitcoin.

Okay, okay, it’s difficult to imagine Americans simply choosing BTC over USD but these dollar-related hurdles will certainly reflect on cryptocurrencies. Pay attention to the Bitcoin price in days and weeks to come because while Americans might not yet be ready to ditch their currency, the rest of the world could.

One can only speculate about the Fed’s next steps but we can’t help but wonder if the digital dollar could be one of them. Be that as it may, whatever happens in the near future will shape the global economy. 2020 is not over yet, so we better buckle our seatbelts… and hedge.

NASA Will Use Blockchain for Quadcopter Comms

Oh yes, blockchain is now wanted by NASA, too. Wanted in a good way. Not like the criminals are wanted. Anyway, two US tech companies will soon build a blockchain-based communication solution for the famous space agency:

‘’Orbit Logic and the Fraunhofer USA Center for Experimental Software Engineering propose the development of a solution called SCRAMBL (Space Communication Reconstruction and Mapping with Blockchain Ledgering), which will leverage blockchain technology to store and distribute a ledger containing satellite constellation-relevant shared data to enable satellite onboard autonomy cooperative attendance of individual assets to system-level needs and objectives.’’

In simple English, this blockchain solution is supposed to increase efficiency between networking satellites’ communications. If something happens to one node, the drone army shall not stop! These quadcopters will move in the environment that can gravely affect the comms, so blockchain seemed like a neat solution.

Of all blockchain use cases, this is probably my favorite one so far! Don’t get me wrong, e-voting and data storage are cool, but not rocket science kind of cool. Well, it seems like not even the sky’s the limit for blockchain technology!

Yeah, I went there, okay.

And the 55th edition of Weekly Crypto Roundup has come to an end. NASA, inflation, money laundering – just the right ingredients for an awesome week.

Now, before we all get Cate Blanchett ‘’The world is changed. I feel it in the earth. I smell it in the air’’ kind of dramatic, remember that changes are an inevitable part of life, like the one we are facing in our everyday lives, and sometimes they can indeed be for the better. In any case, we shall sail through them together, my fellow Anchorians!

Until next week – I wish you fair winds and the following seas!