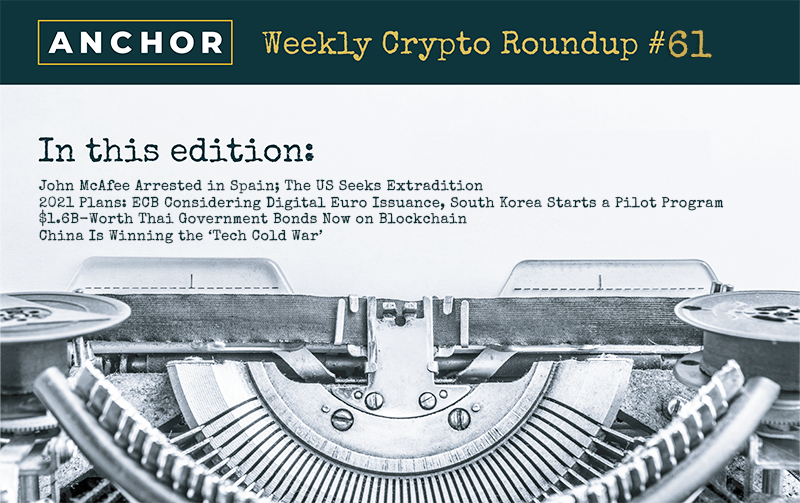 It’s my greatest pleasure to say welcome for the 61st time, my fellow Anchorians! Another busy-with-events week is behind us and we are slowly summing up the impressions. This edition of Anchor’s traditional Weekly Crypto Roundup was mostly dedicated to CBDCs, as they indeed are a trending topic in 2020.

The central bank digital currency update is coming from the European Union, South Korea, and China. Of course, we’ll comment on John McAfee’s recent arrest in Spain, as well as on the Thai government’s innovations.

If these topics interest you, then you’ve come to the right place! Buckle up and enjoy the latest edition of our Roundup!

John McAfee Arrested in Spain; The US Seeks Extradition

There’s a fine line between being a presidential candidate and ending up in jail. I mean, at least in John McAfee’s case. Well, all these ‘’taxes are illegal’’ speeches finally resulted in McAfee’s arrest over the SEC’s lawsuit for tax evasion in Spain earlier this week.

If convicted, McAfee could face a sentence of five years. At the moment, the US is seeking extradition from Spain to proceed with the trial back on American soil.

In 2017 and 2018, this pro-crypto software magnate received over $11.5 million for promoting various ICOs (projects have not been named in the SEC’s suit). In total, it is estimated that McAfee raised over $23.2 million from his crypto endeavors.

John McAfee is well-known worldwide for his controversial attitudes and statements, and especially followed by the crypto community. We all remember his promises to eat certain parts of his body while predicting the BTC price.

Now, this crypto messiah is facing trial, but the location is still unknown. There have been no official statements regarding the arrest, just the fact that, in the process, McAfee’s security guard, Jimmy Gale Watson, is also being sued by the SEC.

While McAfee openly advocates extreme libertarian viewpoints, it seems that nobody is above the law, no matter how hard they want to be.

Hi there, CBDCs! Long time no see. The European Central Bank issued a report dubbed ‘’Report on Digital Euro’’ addressing the potential issuance of a digital Eurozone currency. Since CBDCs are surely a trending topic in sovereign countries and regions worldwide, the EU had to comment as well.

‘’To ensure that consumers continue to have unfettered access to central bank money in a way that meets their needs in the digital age, the ECB’s Governing Council decided to advance work on the possible issuance of a digital euro – an electronic form of central bank money accessible to all citizens and firms. A digital euro would be introduced alongside cash, it would not replace it.’’

The ECB particularly sees the benefits of deploying a digital currency in the retail payment landscape, additionally taking into account the unexpected events of 2020. The report explicitly says that the digital euro won’t be a crypto-asset or a stablecoin since the entire system would be centralized and controlled by the central bank.

While differentiating from crypto, the ECB’s report shows a valiant effort to keep up with the latest developments in technology and finance.

‘’A digital euro could be issued (i) to support the digitalization of the European economy and the strategic independence of the European Union; (ii) in response to a significant decline in the role of cash as a means of payment, (iii) if there is significant potential for foreign CBDCs or private digital payments to become widely used in the euro area, (iii) as a new monetary policy transmission channel, (iv)) to mitigate risks to the normal provision of payment services, (v) to foster the international role of the euro, and (vi) to support improvements in the overall costs and ecological footprint of the monetary and payment systems.’’

If you can’t beat them, join them, right? On the other side of the globe, South Korea is making plans for its own CBDC story with the distribution phase scheduled for next year.

The Bank of Korea will conduct a pilot test in 2021, by virtually issuing and circulating a central bank digital currency (digital won). In this manner, the central bank wants to check the best use cases and have everything put in place before the actual launch.

“We will create a virtual environment by using blockchain technology and test whether our CBDC can be used for real-world transactions. […] The CBDC will be issued and circulated in the virtual world and we are going to test a number of transaction scenarios under a variety of circumstances.”

It’s great to see CBDCs spreading around the world, and especially with the blockchain technology deployment. Of course, we will most certainly keep you posted in case of any further developments!

Talking about innovations – by partnering up with IBM, the Bank of Thailand has issued the world’s first blockchain-based government savings bond platform. According to the officials, time efficiency was the main motive behind this move.

‘’In the past, the sale of government savings bonds was a complex, multiparty, time-consuming process. […] As blockchain technology streamlines the processes of bond issuance for issuers, underwriters, registrars, investors, and key ecosystem participants, the government savings bond platform now becomes an immutable, real-time single source of truth for network participants, which minimizes the redundant validation and reduces the costs of reconciliation’’, it was said in the official IBM’s statement.

From 15 to 2 days? You got it! Well, who doesn’t want to see new blockchain use cases? Thailand’s official policy is generally very tech-savvy and, more precisely, pro-blockchain oriented, as they are too one of the countries piloting the issuance of a CBDC.

“Bank of Thailand’s success with the government savings bond project is the latest example of how blockchain technology can redefine the way businesses operate by simplifying complex processes resulting in fast, transparent, secured and efficient multiparty collaboration.”

This is just one example of how blockchain technology is transforming the world as we know it, and proof its real-world use cases are, more or less, indeed infinite. Way to go, Thailand, looking forward to hearing more good news!

In the 52nd edition of our Crypto Roundup, we talked about the technological race between China and the US and its importance for the entire world.  If you’re a passionate crypto enthusiast, then you probably already know that PRC is definitely in the lead, for now.

Chris Larsen, a co-founder of Ripple, spoke on the LA Blockchain Summit earlier this week and mercilessly called out the US for failing to compete with “the next generation of the global financial system.’’

Talking about blockchain, big data, and AI, Larsen said: “China has recognized that those technologies are the keys to who is going to control the next-gen financial system […] SWIFT and correspondent banking is not going to be the system we are going to be living with over the next two decades.”

And, indeed, America’s efforts to jump on the bandwagon of technological innovations have been very low. While the Chinese central bank processed $162m in 2020 in digital yuan, the concept of the digital dollar still remains in the early phase of the earliest phase.

Truth be told, there are several key factors we need to consider – China is a unipartisan, highly centralized country with the freedom to make big plans and execute them swimmingly. Nonetheless, while the US has a ‘’slower’’, more democratic system, this is no excuse for the complete lack of interest from their side. E.g. Sweden is a very democratic country as well, and yet they are present since the very beginning of the CBDC narrative.

Inevitably, the next big revolution is the financial one, combined with the latest technology development. The US is (kind of) being the champion of the old system, but there is still time to change sides. The battle won’t stop here and, as always, Anchor will be there to comment!

Great job, champ, you made it till the very end! You must be very persistent and keen on learning new things. So are we! This 61st edition was full of CBDC updates from all over the world, so if that’s your cup of tea, you must’ve enjoyed it.

Alas, the world of crypto is getting bigger by day and perhaps, in 2021, we are going to see a new trend. What do you think will that be? While you think, I will wish you fair winds and the following seas until next week, my fellow Anchorians!