Welcome, Digital Ruble; To Hodl or Not to Hodl; Blockchain to Boost the Global Economy; 60% of ETH Not Moved In a Year 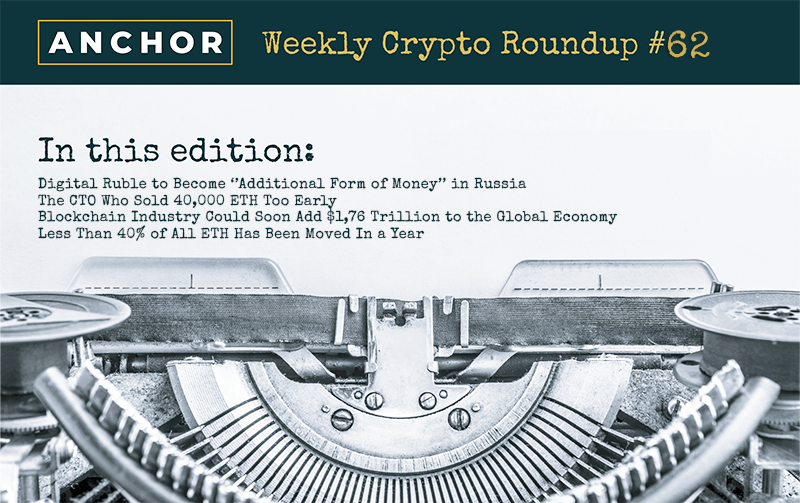 My dearest fellow Anchorians, I bid you welcome to the 62nd edition of Anchor’s Weekly Crypto Roundup! I hope this week was a success for you all and if not… Well, there’s always the next one.

Do you have any regrets regarding your crypto ‘’career’’? Okay, everyone does, duuh, but I mean some serious regrets such as ‘’Oh, man, if I didn’t sell this, I’d be a millionaire now’’. The honest Ripple’s CTO story made me think of this, and if you feel like sharing your burden… Our community is there to hear you out!

Anyhow, as usual, many important news pieces have marked this week in the world of crypto – and, yes, we summed it all up for you again. Russian CBDC, regrets, blockchain skyrocketing, and ETH trading volume – everything is ready for you to dive in!

Digital Ruble to Become ‘’Additional Form of Money’’ in Russia

Not long ago (actually, in the previous Roundup), we talked about the new widely spread phenomena – the CBDCs. New central bank digital currency stories are emerging every week and this time, it’s Russia’s turn.

The world’s largest country and crypto have a long and complex history, but when it comes to the issuance of the national digital currency (digital ruble), Russia is all in at the moment. On October 13th, the Russian government released a consultation paper on the digital ruble commenting on society’s need for improvement.

‘’In Russia and the world, the use of digital financial technologies is expanding; non-cash money is increasingly used in everyday settlements. In these conditions, society creates a request for increasing the speed, convenience, and safety of monetary settlements using modern technologies.’’

This report specifies that the digital ruble will be ‘’an additional form of the Russian national currency that will be issued by the Bank of Russia in the digital form’’. The usage of the digital ruble, via some form of an e-wallet, will be enabled to every citizen, business, and financial market participant in Russia, as well as the state itself.

It seems as if Russia became one of the countries acknowledging the inevitable changes in the global financial landscape and acting on it. Naturally, as one of the global leaders, Russia doesn’t want to lose the game before it even starts. Good luck, Moscow, and for others, we’ll keep you posted!

Practically every member of the global crypto community knows the story of two pizzas being bought for 10,000 BTC in 2010. Ouch, right? To sell or to hodl, that is the neverending question in traders’ heads. Nonetheless, this doesn’t happen only to ‘’mere mortals’’. The great have fallen, too.

David Schwartz, the well-known Ripple’s CTO, recently revealed his sad crypto story. In 2012, he and his spouse made a risk management plan in which they decided to sell a big part of their crypto assets. Part of that plan was to sell 40,000 ETH coins for a price of 1$.

‘’My decision to derisk was made in 2012 or so when I discussed investing in cryptocurrencies with my wife. She insisted we agree on a derisking plan right then. And I must say that every bitcoin I sold for $750 or XRP for $0.10 hurt.’’

Unfortunately, humans can’t predict the future (at least most of us), so all that we have left in situations like these is the utilization of our common sense. Sometimes we lean towards lesser risk, sometimes vice versa. It happens to everyone! You’re not a bad trader simply because you made one poor decision, and you certainly aren’t a crypto God because of the good one. Trust the process!

Blockchain Industry Could Soon Add $1,76 Trillion to the Global Economy

The range of blockchain technology use cases is getting wider every day – that is precisely why the PwC conducted research and came to the conclusion that blockchain ‘’has the potential to boost global gross domestic product (GDP) by US$1,76 trillion over the next decade’’.

There are many valid reasons to support this theory – this year has proven why only the digital ones survive and that many traditional businesses seriously need to level up. Additionally, blockchain technology per se offers complete trust, transparency, and efficiency – all deeply desired in the digital world.

Healthcare, government and public services, manufacturing, finance, retail, and logistics – these are the top industries to deploy blockchain in years to come according to the PwC economists. This type of technology is not a simple upgrade to the existing system, it changes the system at the very core:

‘’Blockchain is going to become an infrastructure technology – like the internet. No one really cares about how the internet works, but it has become integral to our daily lives. The same will be true of blockchain. We haven’t reached that tipping point yet because there are no dominant players. At some point soon, this will change,” said Guenther Dobrauz from PwC Switzerland.

Blockchain emerged along with Bitcoin but has shortly found a different kind of path (something like a prodigal son). And just like Mr. Dobrauz said, blockchain technology is an instrument, a foundation for building miraculous things and it will yet surprise us in years and decades to come.

The crypto community is still anxiously anticipating Ethereum2.0 and its PoS. Perhaps that is one of the main reasons why 60% of all ETH have not been moved for an entire year!

The data shows that only 39.6% of ETH’s circulating supply has been changing hands in the last year, while most of it has been hodled. Anthony Sassano, the co-founder of ethhub, tweeted on this topic:

‘’~60% of all ETH hasn’t moved in 1+ years. With eth2 phase 0 approaching, it’ll be interesting to see how much this percentage comes down by as Ethereum OG’s move their stash into staking. I’m particularly curious to see if any of the coins in the 5+ years category move.’’

Interestingly enough, there’s recently been a short increase in the velocity of on-chain transfers for ETH with 0.5%-1% growth compared to the same time in 2019.

Hodling of Ethers can also be connected to its recent price movements – from $111 per coin in March to $467 in August/September. You wouldn’t want to sell either, right? Be that as it may, it takes a little bit of skill and knowledge, and a lot of luck to guess the exact price movements of a cryptocurrency. Good luck to you, nevertheless!

And just like that, the 62nd edition of Weekly Crypto Roundup is done and soon, this year will be done, too. Only two and a half months, guys! I expect a firm whiff of a magic wand on January 1st, I don’t care what everyone else says.

There will be no COVID-19 and one BTC will be worth at least $250,000. It’s important to have humble wishes, you know. Before I go too far, let’s conclude this article. Did someone say finally? Okay, okay, you know the drill – I wish you fair wind and the following seas, my fellow Anchorians!