BTC Flirting With $16k, Hacks and Scams Are Costly, WEF Advocates Blockchain While Akoin is Being Launched 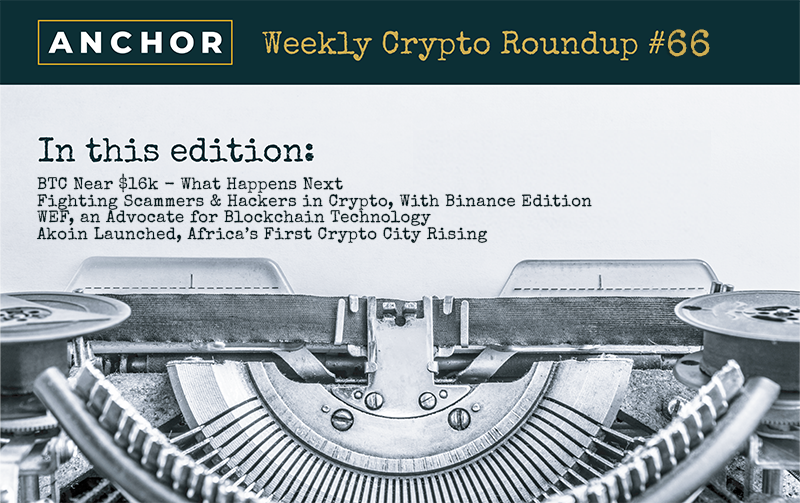 Ahoy, fellow Anchorians, and welcome aboard! We are sailing into another thrilling edition of our Weekly Crypto Roundup and leaving an eventful week behind us.

In the 66th edition, we shall talk about the recent BTC price movements and what the near-future projection is, reflect on various schemes & hacks and how to deal with them, discuss worldwide blockchain utilization, and see how things are going in Akon’s crypto city.

Only a month and a half until we stop using this ‘2020 excuse’, so I’m sure many interesting occurrences await us in these weeks to come. Now, without further ado, we are diving straight into the latest edition of Anchor’s Roundup!

If you are a BTC hodler, then you must be happy with the recent state of affairs – at the moment of writing, Bitcoin’s price is $15,900 and it seems like this green trend will continue. The bulls have been taking over the market for some time now, but after Joe Biden officially became president-elect, it’s clear they are here to stay. At least for now.

Just a few months ago, the ‘unbreakable’ resistance line for BTC was set at $12k and it was successfully breached. Afterward, the resistance level was marked at $15k with the support line at $13k, and (yes I kinda spoiled it already) the $15k line was overcome, too. What’s next?

Experts, however, hint that the cryptocurrency we should be looking at is actually ETH:

‘’All eyes may be on Bitcoin and the surge past the $15,000 level. However, the recent development update related to Ethereum may result in some capital rotating back into Ethereum and its broader ecosystem,’’ said Denis Vinokourov from Bequant.

Of course, historically, when Bitcoin surged, Ether followed – but is it time for ETH to challenge BTC? Only the Ethereum 2.0 release can tell. PoS will deal with clogs and high fees and, with the staking incentives policy, possibly result in a decrease in the circulating supply of ETH across exchanges.

Now is the time to keep your eyes open, dear crypto enthusiasts, because this December will probably be one of those ‘crazy Decembers’ when it comes to cryptocurrencies’ price jump. DYOR, have a hedging mechanism in place, and enjoy the ride!

Did you know that, since 2011, hackers and scammers have stolen $7,6 billion? Crystal Blockchain, a blockchain analytics firm from Amsterdam, has released a new report explaining how these attacks occurred and what the damage was.

Around $2.8 billion was stolen through security breaches, e.g. through cryptocurrency exchange’s security systems. 113 breaches were recorded in total, along with the biggest attack on Coincheck in 2018 when hackers took  $535 million worth of NEM coins.

Segmented by countries – the US, the UK, China, and South Korea were targeted the most.

In 2018, a group of scammers used a phishing campaign to steal from crypto users by mimicking Binance. This week, the exchange announced that a $200,000 bounty reward was given to private investigators who successfully identified the attackers.

Guilty parties, Danil Potekhin and Dimitrii Kamasavidi, had previously been charged by DoJ and OFAC since their attacks on various crypto exchanges resulted in losses worth $17 million.

Hackers and scammers are getting more sophisticated, that’s for sure, and that’s precisely why we, as passionate members of the global crypto community, must raise awareness about them. Be careful with your access data and always do diligent research!

WEF, an Advocate for Blockchain Technology

This isn’t the first time we’re talking about the WEF’s (The World Economic Forum) advocacy for blockchain technology. Some of their earlier reports can be found in our previous Roundups.

Earlier this week, the WEF released a new report dubbed ‘How sustainable digital finance can unlock a low-carbon economy’, calling blockchain technology one of the keys to much-needed sustainability:

Big data, artificial intelligence (AI), mobile platforms, blockchain, and the Internet of things (IoT) are definitely the future of the global economy, as the WEF suggests. By imploring the private sector to turn to these technologies, The World Economic Forum hopes to achieve two main goals: economic growth and sustainable development, phenomena that have historically excluded one another.

Blockchain can solve the redundancy issue when it comes to data storage, but also do wonders in supply chain management, and even the manufacturing process. Practically, not even the sky’s the limit anymore since blockchain is meant to find its utilization in space, too.

While being traumatizing for the entire humanity, 2020 has proven that there are better alternatives to the existing slow and consuming processes, and one of these alternatives is most certainly blockchain technology. We can’t wait to see new projects and use cases!

AKN token (Akoin) is now officially launched on the Bittrex cryptocurrency exchange! Akoin as well, of course, is an entire cryptocurrency project in Africa, started by famous singer Akon.

The general idea is to create a sustainable city (Akon City in Senegal), which will economically be self-sufficient and entirely based on the cryptocurrency economy.  Therefore, the AKN token will in a way serve as a CBDC, available to all citizens to use.

In the next few months, an official pilot program will take place in Mwale Medical Technology City, or MMTC, in western Kenya with projected 30,000 transactions per month. In the meantime, AKN can be traded globally thanks to the launch on the Bittrex exchange.

“We believe the platform can make serious headway in bringing millions of people into the formal economy, which is a critical step for economic growth,” was said in a joint statement.

And that’s not everything, the Akon Foundation is also setting up a blockchain hub in MMTC, called ‘Kenyan Opportunity Hub’.  It seems as if Jack Dorsey, CEO of Twitter, was right after all – Africa has a lot of potential when it comes to tech innovation.

We wish good luck to the Akon Foundation and hope to see many great things in months and years to come!

Okay… Not great, not terrible? Sometimes there is both good and bad news in our Roundup and this week, that was precisely the case.

Until then, and until next week, I wish you fair winds and the following seas, my dear fellow Anchorians!