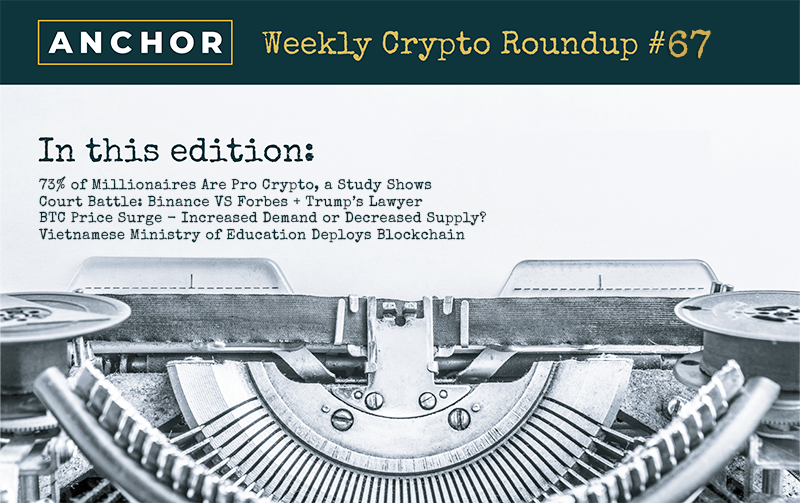 My dear fellow Anchorians, welcome to the 67th edition of Weekly Crypto Roundup! How’s your week been? The crypto community has been excited over the latest BTC rally (we’ll get there in a minute), but there were many other news-worthy events in the past 7 days:

– interesting surveys, the Binance-Forbes lawsuit, and new blockchain use cases worldwide. And, yes, it is all here summed up for you!

Before we jump straight in, let’s go on a short trip down memory lane – what’s your first ever memory of crypto? When did you first learn about it? What was your initial reaction? I’ll share mine in the Final Thoughts section, but for now, Roundup #67 is ready for you!

73% of Millionaires Are Pro Crypto, a Study Shows

Did you know that 73% of millionaires own and/or want to invest in cryptocurrencies? Well… now you do! According to the recent study by deVere Group, conducted with more than 700 high net worth individuals (HNWs), almost ¾ of millionaires worldwide (worth more than 1 million GBP) are pro-crypto oriented.

To compare, the same survey was conducted in 2019 with 68% of respondents being crypto-friendly. So, a 5% increase in just a year – not too bad, huh.

“As the survey shows, this impressive performance is drawing the attention of wealthy investors who increasingly understand that digital currencies are the future of money and they don’t want to be left in the past,” said deVere Group CEO and founder Nigel Green.

Naturally, you don’t become a millionaire overnight just because someone brought a lot of cash to your doorstep – a good business hunch and a possibility to foresee the bigger picture are necessary if you are into investing.

So, crypto being a good choice for millionaires can only confirm the hypothesis that cryptocurrencies and digital currencies are the inevitable near future.

And the forthcoming of some big players such as PayPal certainly didn’t hurt: “No doubt that many of these HNWs who were polled have seen that a major driver of the price surge is the growing interest being expressed by institutional investors who are capitalizing on the high returns that the digital asset class is currently offering.”

2021 will most definitely be a good year for crypto, but it will even go beyond with many CBDC projects emerging and being tested, vast blockchain use cases around the globe both in public and private sectors and so on.

Okay, so here’s the tea. Binance crypto exchange has filed a lawsuit in New Jersey against Forbes magazine and two of its journalists – Michael del Castillo and Jason Brett. The reason behind this lawsuit is the article published on October 29th dubbed “Leaked ‘Tai Chi’ Document Reveals Binance’s Elaborate Scheme To Evade Bitcoin Regulators”, which Binance claims to be defamatory.

Binance’s stance is that “the story contains numerous false, misleading and defamatory statements about Binance’’ and that it has resulted in material damage worth millions of dollars. Forbes, on the other hand, ‘’stands by the reporting of its journalists’’.

Additionally, Binance claims that the alleged author of the ‘Tai Chi’ document, Harry Zhou, never worked for the company. Forbes, of course, says they confirmed that Zhou had been a Binance employee.

The entire story seems so confusing, so we’ll wait for the court to decide before making any claims. Interestingly enough, Binance hired famous Hollywood lawyer Charles Harder who has recently represented President Trump in a case against sexual charges.

Fighting defamation on the court is never easy since you have to prove “reckless disregard for the truth” or actual malice. Be that as it may, we can only wait and see how this story unfolds and who will win this case. Anchor will be here to let you know!

BTC price continues to surge as a bullish trend is still very present on the market. The price at the moment of writing is $17,461 (CMC). But what’s the reason behind this trend? Increased demand or decreased supply?

If you somehow didn’t know, here’s a fact for you – miners from China control over 70% of bitcoin’s hashrate or mining power. At the moment, it’s not much fun to be a BTC miner in China since 74% of them are facing challenges liquidating their crypto holdings for cash, meaning their assets have been frozen by the government.

What we have now is a supply crunch [def: a period during which the supply of a particular product is lower than the demand for it, leading to higher prices] that has pushed the BTC price up to $18,000 in November.

To simplify it as much as possible – the actions of the Chinese government, such as stern measures and disciplinary action towards the industry of crypto, resulted in an evident BTC price surge.

“Mining pools were selling large chunks of bitcoin in early September through exchanges, but this was hastily halted as their last remaining fiat off-ramp avenues were impacted with the arrest of large exchange heads like Star Xu and other [over-the-counter] brokers,” QCP Capital stated.

It’s sound logic when you think about it, but let’s not be hasty and jump to conclusions. There is no sign the bullish trend could suddenly end, and it actually seems that the BTC price will continue its growth path.

This week’s round of applause for blockchain adoption goes to Vietnam! The Vietnamese government, more precisely its Ministry of Education, has decided to utilize blockchain technology to record certifications.

The ministry teamed up with TomoChain, a startup from Singapore, to develop a blockchain-based platform to issue diplomas, starting in 2021.

“Diploma and certificate management is an issue that needs to be resolved by technology, which is significant for the whole of society and also cost-efficient for the diploma management system in particular, and education in general,” said Nguyen Van Phuc, a deputy minister.

Blockchain is meant to help with the verification of student qualifications and, in the long run, to ease the procedure of hiring for agencies and HR units.

This is just one of many great examples of how the public sector can successfully use blockchain technology in governmental services and modernize the current time-consuming processes. We are lucky to witness new use cases emerge around the globe every week, and this is only the beginning!

Hi there! You’ve made it again. I promised you something at the beginning, didn’t I? My first memory of crypto.

Well, it was years ago; a friend of mine told me his brother is investing in another business, this time it’s a luxurious car washing service. While it sounded like a copy-paste Breaking Bad scenario, it turned out to be an interesting bitcoin story. You see, his brother was one of the earliest adopters and now, already a successful trader. While he hodled most of his BTC assets, he did sell some and invested in various businesses.

Now, years after, crypto is much more than ‘’the big secret’’ and it’s increasingly being used by lots of people worldwide. Some were just slightly more sharp-witted than the others and invested in the earliest stages of what it’s now an industry. Nonetheless, the world of crypto has a place for every enthusiast, my fellow Anchorians. Well, then, until next week – I wish you fair winds and the following seas!