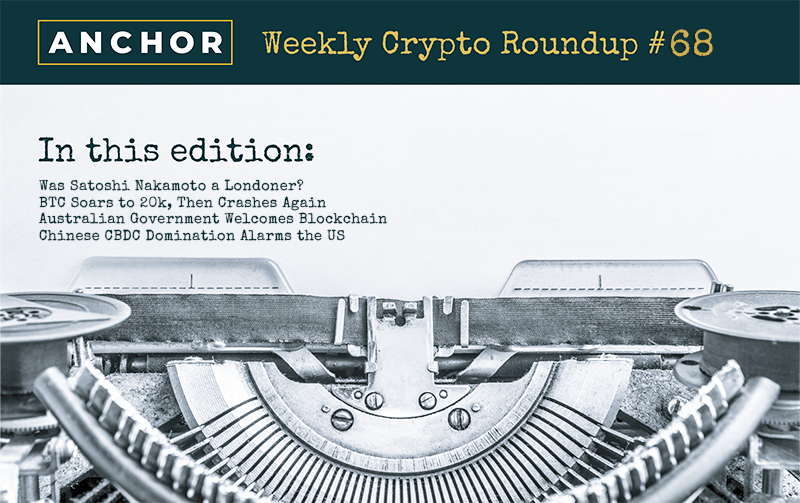 Hi there, my fellow Anchorians, how are you feeling today? It was Thanksgiving in the US, but since it’s a beautiful and universal concept, let’s take a moment to reflect on what we are thankful for, no matter where we are.

Okay, now that we are done with this little exercise, the focus shifts to crypto! In our world, so many things can happen in a week – e.g. BTC price can explode and then crash… again. Of course, that’s not the only thing we’ll talk about in the 68th edition of our Weekly Crypto Roundup, there are some interesting new rumors about Satoshi’s origins, new blockchain use cases, and the CBDC tension between China and the US.

Just another week in paradise, right? Anyhow, now you know what to expect in this edition so, without further ado, let’s jump right in!

Was Satoshi Nakamoto a Londoner?

Every now and then, a new theory about Satoshi’s identity emerges. While this isn’t the first time evidence suggests Nakamoto is British (spelling and colloquialisms), there are some interesting new ‘facts’ to support this version of events.

Doncho Karaivanov wrote a compelling article dubbed ‘Satoshi Nakamoto Lived In London While Working On Bitcoin. Here’s How We Know.’ for The Chain Bulletin analyzing Satoshi’s Bitcointalk posts, SourceForge commits, and emails, and other available data. The conclusion? Satoshi Nakamoto lived in London when he was working on Bitcoin.

‘’The key detail here is the title, “Chancellor on brink of second bailout for banks”. This title appeared on The Times (Times of London) newspaper issue on January 3, 2009 […] This exact issue of The Times did not circulate in the United States.’’

Only the printed edition distributed in England used this exact, quoted headline and Karaivanov believes this pinpoints Satoshi’s location at the time. Why London then? Well, 43% of The Times’ readership is located in London, the city that’s ‘the largest financial hub in the world’.

While speculating on various theories is nonetheless quite interesting, the real question is – do we really need to know the true identity of Bitcoin’s creator? Or is the creation itself more important?

Some people claim they are Satoshi (we all know who), there is a theory that Satoshi worked for Escobar, and now this. Will the truth ever come out? For the sake of crypto, perhaps it’s better to leave it like this – after all, sounds more legendary when it’s anonymous.

Well, not quite… Yet.

The price dropped because large-volume investors were depositing BTC to exchanges, wanting to make a profit. This sudden surge in supply resulted in a price crash, but there is still a possibility the market will regulate itself and maybe we’ll finally witness the jump over the $20,000 line. Not a bad way to finish this crazy year, right?

While the BTC market fascinates many, if you are investing, make sure you do your own research and have a hedging mechanism in place. Bitcoin is amazing, but it’s also very volatile, so you should have some form of strategy to protect your assets if the price crashes drastically again. Merry trading!

Blockchain technology offers endless opportunities for deployment, and many countries are embracing its possibilities, including Australia!

This time, the Australian government is testing inter-government documentation exchange with Singapore, as one of the many pro-blockchain initiatives. More precisely, Australia Border Force (ABF) launched a blockchain trade trial in collaboration with Singapore Customs:

“The ABF welcomes the opportunity to collaborate further with Singapore to improve cross-border trade between our countries. In addition to our efforts internationally, this initiative will incorporate paperless trading and secure, the digital exchange of trade information as part of the future architecture and design of an Australian Trade Single Window,” said Michael Outram.

This is just one of the projects from the National Blockchain Roadmap led by Chloe White, under which the Australian Public Servant blockchain network was launched earlier this month.

Ah, it’s wonderful to see that countries are developing roadmaps and long-term strategies when it comes to blockchain technology. And it’s a global trend – Australia, Singapore, Colombia, and the list grows every day.

We will, of course, always be there to keep you posted!

Chinese CBDC Domination Alarms the US

We are all surprised by the lack of engagement on the American side when it comes to CBDCs, and the US government has been often criticized for not having an answer to Chinese dominance in this field.

However, this time, the warning comes ‘from their own backyard’. The Director of National Intelligence, John Ratcliffe, is expressing serious concern on the matter and asking the SEC to look further into the issue of Chinese national digital currency emergence.

Ratcliff wrote a letter ‘pointing to concerns the US has about China’s sway over digital currency’, while also indicating that more than half the world’s cryptocurrency mining operations are based in China as well.

We know, John, but we’re glad you know it, too.

‘National security’ may sound like an excessive phrase, but for decades, almost all international trade was settled in dollars with the USD being the world’s reserve currency. If this changes and the digital yuan becomes the means of international settlement, the US economy will surely be in trouble. Mildly put.

President Trump and his administration will leave the White House soon, and we’ll see if president-elect, Joe Biden, has an answer to this issue.

Unfortunately, this is all, folks. At least for this week’s Crypto Roundup! There are many thrilling occurrences in the world of crypto every day, but we sadly can’t address all of them.

While the BTC dances with the all-time high price, blockchain is going on another adventure. We still may not know who Satoshi Nakamoto is, but we surely live in a world where cryptocurrencies and digital currencies are of the utmost importance for the world’s political and economic domination.

We’ll see how these stories will unfold, but until next week – I wish you fair winds and the following seas, my fellow Anchorians!