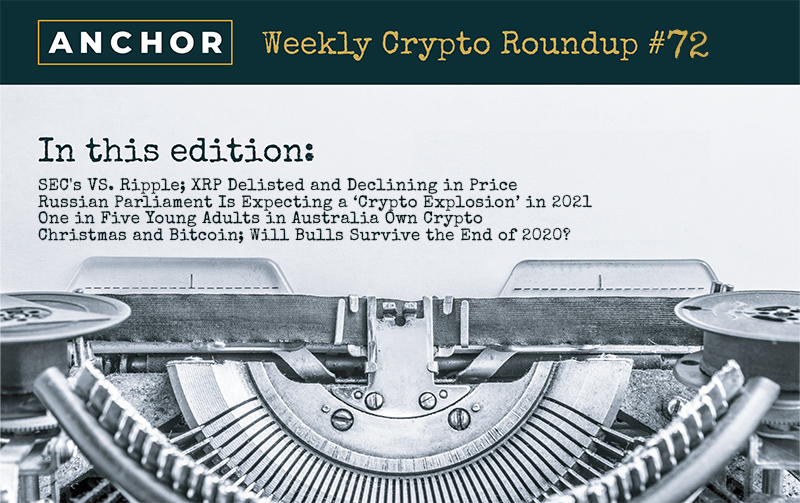 Merry Christmas, my fellow Anchorians! 🎅 I wish you happy holidays, a lot of joy and laughter, and some certainty in these uncertain times. Hope you’re all safe and sound and ready for some new adventures in the year to come.

Along with the seasonal delight, the 72nd edition of Weekly Crypto Roundup brings both good and bad news. Now, more than ever, crypto is closer to achieving mass adoption. BTC price is still soaring, but 2020 has indeed been, well 2020, to Ripple.

The most crucial events in the global crypto community have once again been summed up and are ready for you, guys. Without further ado, let’s see what this pre-Christmas advent week had in store for us, and let’s dive right in!

SEC’s VS. Ripple; XRP Delisted and Declining in Price

The United States Securities and Exchange Commission (or commonly known as the SEC) filed a lawsuit against Ripple, its CEO, and co-founder earlier this week. Garlinghouse, Larsen, and the company were accused of “unregistered, ongoing digital asset securities offering” to various investors since 2013.

The lawsuit further specifies: ‘’The complaint alleges that Ripple raised funds, beginning in 2013, through the sale of digital assets known as XRP in an unregistered securities offering to investors in the U.S. and worldwide. Ripple also allegedly distributed billions of XRP in exchange for non-cash consideration, such as labor and market-making services. According to the complaint, in addition to structuring and promoting the XRP sales used to finance the company’s business, Larsen and Garlinghouse also effected personal unregistered sales of XRP totaling approximately $600 million.’’

Shortly after, some crypto exchanges started delisting XRP out of fear of being an accomplice, and the price dropped by almost 50% in less than 48h (from $0.49 to $0.25).

The lawsuit mentions digital asset trading platforms that were paid in XRP, meaning they will somewhat be held accountable shortly, too (if XRP is officially deemed a security).

The global crypto community is, naturally, occupied with this piece of news, as #XRP is trending on Twitter, combined with words such as Securities, Lawsuit, and Sell, according to Joshua Frank. These three sum it all up nicely, don’t you think?

Is this the end for Ripple and therefore XRP or is there a possibility for them to come out as winners? Only time (and the court) can tell. Until then, we will surely keep you posted!

Russian Parliament Is Expecting a ‘Crypto Explosion’ in 2021

Crypto optimism is booming in Russia! The world’s largest country had had a complicated love-hate relationship with cryptocurrencies in the past, but it seems like we really have a happy ending here.

We talked about the issuance of a major crypto bill in Moscow in August — this new crypto-related law comes into force on January 1st, and certain members of the Russian parliament are expecting a surge in crypto projects.

“A lot of big businesses have asked us to pass the law more quickly, and I know that they are going to produce stablecoins,” said Anatoly Aksakov, adding many projects are ready to come to life now the regulation is clear and ready.

Aksakov commented on the digital ruble, too: “From my point of view, the digital ruble is one of the future forms of our ruble, and it should contribute to the development of the financial assets market.” Whether these two trends will give us ruble-pegged stablecoins is still unclear.

In this manner, Russia has demonstrated its official stance on cryptocurrencies and CBDCs, choosing to be proactive, rather than reactive.

One in Five Young Adults in Australia Own Crypto

An interesting survey comes from Australia! Almost 20% of Australian adults, aged mostly between 25 and 44, are owners of cryptocurrencies in 2020.

This isn’t the first time we’re talking about Australia in our Roundups this year; the country’s blockchain adoption efforts and the surge in BTC ATMs were just a couple of topics we discussed. Clearly, the Australian government chose to be among the ones that are pro-crypto and the citizens are sharing the enthusiasm.

The most popular cryptocurrency is, of course, Bitcoin — 89% of respondents said they have at least heard about BTC. The survey, however, shows a discrepancy when it comes to male/female crypto users since men are three times more likely to know about altcoins and other virtual currencies.

If you’re a data enthusiast, then this must surely be your cup of tea. Surveys like these are always insightful and show us the current landscape that may surprise us. Go, Aussies!

Christmas and Bitcoin; Will Bulls Survive the End of 2020?

Last week we were blessed with a true crypto miracle — BTC reaching an all-time high! However, Christmas and the end of December can be ‘dangerous’ for Bitcoin’s price, though these December bulls seem to be prevailing at the moment.

During the last seven days, $22,247 was the lowest point for the BTC price (December 21st), but at the moment of writing, Bitcoin is successfully holding over $23,000 again, while shortly even managing to overcome the $24,000 line.

It’s worth mentioning that $2.3 billion worth of Bitcoin futures is set to expire on Christmas day, which can trigger a volatile last week of 2020. Events like these have previously had a large impact on BTC price fluctuations.

Nevertheless, the Bitcoin market is in a strong bull phase and we can only wait and see what will happen to the price over the weekend. As we mentioned earlier, XRP’s having the most notable price crash of all altcoins. ETH price is again below $600 as the BTC price surge isn’t reflecting equally on other currencies.

My dear fellow Anchorians, we come to the end of another Weekly Crypto Roundup! I hope this week’s news was insightful and that you learned something new again.

Since it’s Christmas time, it’s only appropriate to celebrate another successful week with tons of food! I know that’s what I’ll do. We’ll collectively go on a diet when BTC passes $30k! Deal? Anyhow, let’s not keep you any longer — you know I wish you fair winds and the following seas! Merry Christmas.