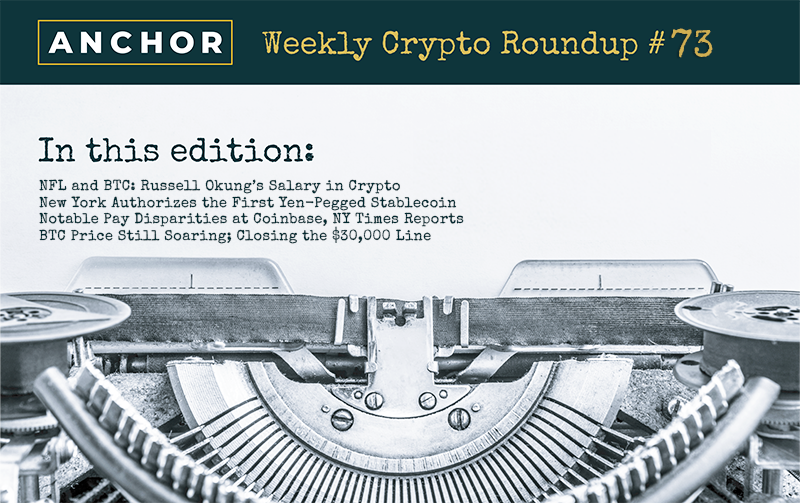 Ho, ho, ho! Happy New Year, my fellow Anchorians! We’ve made it, and what a year is now behind us. First of all, let me kick this off with my sincerest wishes for an amazing 2021, to all of you. 🎁⛄

I have a feeling as if a lot of people firmly decided to have a great year, no matter the circumstances, and (as Gandalf says) that is an encouraging thought.

Crypto enthusiasts can say, nevertheless, that 2020 wasn’t that bad in terms of what was (and still is, actually) happening on the market. We had a lot of new initiatives, CBDCs projects, national blockchain strategies, new crypto legislature all over the world, partnerships between commercial banks and crypto projects, and, of course, the BTC’s all-time high. Yeah… Not too bad.

We all want the crypto industry to continue to expand and grow, and while it does, Anchor’s Weekly Crypto Roundup will be there to share it all with you. Jump on board and let’s dive right into the 73rd edition!

The sports industry, in general, has been flirting with cryptocurrencies for years, e.g. many football (due to the complexity of sports’ nomenclature, only in this article called soccer) clubs have had successful fan token launches; Sacramento Kings is the name that rings a bell when it comes to the NBA, and so on.

This time, it’s the case of an NFL football player, Russell Okung, receiving half of his salary in BTC! Okung had been previously vocal on players not having enough financial power in their hands and implored the usage of bitcoin.

In this manner, Okung becomes the first-ever NFL player to get paid in cryptocurrencies, after a plead on Twitter from May 2019. ‘’Pay me in Bitcoin,’’ were the words from a concise, yet clear tweet. And now, this player’s wish will come true! Though imagine it came true just a couple of months earlier.

Thanks to the bitcoin startup Zap and its product Strike, Okung’s yearly salary of $13,000,000 in total will be divided into two halves – payment in fiat, and payment in BTC. Rumor has it that there are other sports players (from NBA and MLB, too) who intend to do the same.

“It’s a big, big deal that we found a way to allow any individual to receive a percentage of their labor in bitcoin,” said Jack Mallers, founder of Zap.

People should have the ability to choose their preferred means of payment as they see fit while complying with the adequate legislature. Still, Russell Okung’s case represents a precedent of sorts, and if thankfully all goes well, we may see a new trend in 2021.

The fact worth mentioning – GMO the world’s largest online FX trading platform, so an issuance of a stablecoin pegged to fiat is a major upgrade for this big player. Their CEO, Ken Nakamura, shared: “We’re breaking ground with our move to issue the first regulated JPY-pegged stablecoin, which many see as a haven asset.”

And the other side of the table seems very satisfied, as Superintendent Linda Lacewell confirmed: “New York continues to stay on the forefront of financial innovation as stablecoins take on growing significance and point to new directions in the future of money.’’

Though fiat-pegged stablecoins are vulnerable to the same weaknesses traditional fiat currencies possess, they are an important bridge to the world of crypto. In this way, many FX traders could effortlessly start trading cryptocurrencies, too.

Many ‘traditional’ financial institutions and companies are opening themselves up for partnerships with crypto projects and cryptocurrencies in general. This year was truly eventful when it comes to this manner, and it can only go forward from this.

Coinbase seems to be way below the industry average when it comes to salary disparities, according to the NY Times.

Nathaniel Popper’s article says the difference is mostly based on race and gender dichotomy. Starting with the biggest discrepancy – male level-one managers at Coinbase earned 20% more than their female colleagues. And on average, Coinbase’s female employees are paid 8% less than the male. Black employees are, on the other hand, paid 7% less than the others.

“The pay disparities at Coinbase appear to be much larger than those in the tech industry as a whole, and at the few other tech companies that have had to release data,” Popper explained.

Coinbase didn’t deny the fact but explained that a significant effort has been made in the last couple of years to overcome these inequalities: ‘’Since Q1 2019, we’ve put in significant work to ensure our pay-for-performance philosophy is transparent and fair. We’ve made several major program changes which I’ve detailed below that have improved our comp framework over the last 2 years,’’ said L. J. Brock, firm’s Chief People Officer, in a blog post.

The industry of crypto generally has more male employees, though that trend has been in a decline in the last few years. However, as even a revolutionary movement, crypto should be among the firsts to deal with any form of inequality.

Coinbase, though, had previously announced in October the now-famous ‘apolitical approach’ and offered exit packages to any employee who disagreed with the policy; around 5% of staff left the company.

The bulls are still ruling the market, followed by optimistic buying that results in the most wonderful ‘green wave’ we’ve seen when it comes to Bitcoin price. We can only wait and see what will happen when e.g. PayPal crypto transactions start. It seems as if the BTC’s future’s never been brighter!

Will BTC surpass $30,000 before the New Year? Remember, just weeks ago most of us couldn’t imagine this December will be the best month ever for BTC. But who doesn’t like positive surprises, right?

Ether is doing more than well, too, trading at $727, which is also a 20% price growth in a week. XRP price is still suffering due to the recent episode with the SEC but remains around $0.21.

What would you ask of your Crypto Santa? Write it down quickly, as holiday miracles are far from over.

Now I can say – another year, gone! Though I’m not Dumbledore or Gandalf, I can surely say I’m glad this 2020 is behind us. While challenging, it was also a year of learning, adapting, and growth. Bad circumstances often lead to triumph, and I hope that’s exactly what 2021 will be for all of you – triumphal.

Grow like BTC and the industry of crypto in general, my fellow Anchorians, and until next week (and next year) – I wish you fair winds and the following seas! Have a good one.