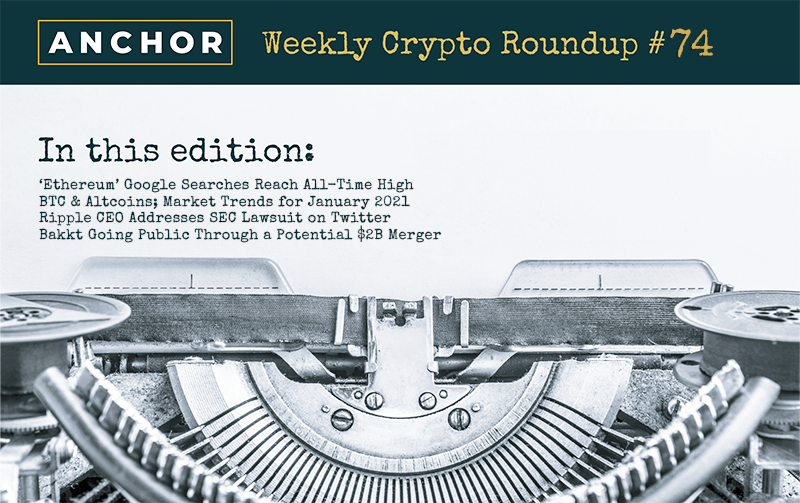 Ahoy, fellow Anchorians, welcome to 2021 and the 74th edition of Weekly Crypto Roundup! While global turbulences haven’t ended with the notorious year behind us, we still have many reasons to celebrate – especially in the world of crypto!

Bitcoin continues to break all records price-wise, while most of the altcoins follow. A big portion of our Roundup will focus on this trend, along with a couple of other important news pieces. In any case, what a time to be a crypto enthusiast, huh?

Even some of my non-crypto friends are starting to invest in cryptocurrencies, recognizing they are not only the future but also the present in terms of the global financial landscape. Though still relatively short, crypto has a rich history that continues to bloom every day.

I’m betting you also have, e.g., family members or friends that suddenly became very interested in crypto, and that’s excellent news. We are much closer to mass adoption than we were just a year ago. Nevertheless, without further ado, let’s dive right into this week’s news!

While all kinds of crypto-related records are breaking, surprisingly enough, Google Trends show that major keywords (such as ‘bitcoin’) were searched more in December 2017. On the other hand, some of them have recently reached their peak of glory, including the search for ‘Ethereum’.

More people are looking up Ethereum now than they were in January 2018 (when ETH reached its $1,432 all-time high). Along with the current bull market trend, the reason behind this increase in search could also lie in Ethereum’s recent switch to PoS.

Though Ethereum reached its all-time high Google search-wise, Bitcoin remains the most looked up keyword (roughly in 5:1 ratio compared to Ethereum).

Compared to the last most notable moment in crypto history (December 2017), these are some of the terms that have had a growth in searches: Ethereum, DeFi, Ethereum Classic, Crypto trading.

Surely, by now, everybody knows there is something bullish going on in the crypto market, and even usually non-tech-savvy folks are interested to learn what everyone is talking about. So, brace yourselves since the biggest crypto momentum is coming.

As a well-known Joel McLeod’s phrase says: “Cryptocurrency is absolutely here to stay. If you can’t see that at this point, it’s time to learn more about it.” And people are starting to learn indeed!

The crazy ride is far from over – Bitcoin has now surpassed $40,000 and it’s still soaring (at the moment of writing, BTC price equals $41,208). This non-stopping bullish trend spread to altcoins, too, as we are currently seeing a true rhapsody on the market.

First things first – BTC. On January 7th, Bitcoin went over $40k just to go back at $36,600 shortly after, before the dip-buying started and pushed the price back over $41k (and rising). While skeptical and cautious users are wondering when these bulls will stop, many experts are pointing to the (now obvious) fact – there is no resistance ahead, only more records to break.

“Beyond being a psychological level and a round number, I don’t view 40K as particularly significant. From a technical perspective, there is no resistance ahead – just blue skies because Bitcoin is in parabolic price discovery. The expectation would certainly be that a major correction will eventually come, but it is a fool’s errand to try to time it or to assume that an arbitrary number like 40K will be the top,” said Scott Melker, a known crypto trader, to Cointelegraph.

What Melker is trying to say is this – keep the seatbelts on, it’s not over yet. That price correction is inevitable at some point, but for now, there are no indications that the BTC price is going to crash anytime soon.

As for ETH; this cryptocurrency has come a long way indeed and it’s getting closer to its previous all-time high from 2018 ($1,4k) as its price equals $1,255 at the moment. While Ether’s fate is somewhat bound to Bitcoin, it comes as no surprise their price movements are, in a way, similar.

XRP made a brief comeback and notable growth (now $0.33), but its future remains uncertain. When it comes to the biggest percentage growth in price, current winners are HBAR, SOL, ENJ, QNT, MANA, and NANO. Worth mentioning is also YFI.

Brad Garlinghouse, CEO of Ripple, addressed some of the community’s burning questions regarding the SEC’s lawsuit on Twitter. Ever since the SEC filed a $1.3 billion lawsuit against the company, XRP is, well, not doing great at all.

Some major exchanges such as Coinbase, Bittrex, OKCoin, and Bitstamp have delisted XRP or suspended trading. This, inevitably, influenced the price in a very bad way since the price dropped to $0.17 at one point.

“Know we tried – and will continue to try w/ the new administration – to resolve this in a way so the XRP community can continue innovating, consumers are protected and orderly markets are preserved.” – Garlinghouse, Larsen, and Ripple tried to settle, but that was an unsuccessful attempt.

One of the questions addressed the company itself and its investors, to which Garlinghouse replied: ‘’Yes, we have real shareholders. That is how you own Ripple equity – buying our stock, not buying XRP. We’re disappointed that Tetragon (who owns 1.5% of Ripple) is seeking to unfairly advantage itself through the SEC’s allegations.’’

The idea behind this Q&A moment was to show the community their concerns are duly noted and now answered, and that the company won’t remain silent. However, truth be told, while transparent, these actions seem more reactive than proactive.

It’s a long way ahead – the new administration selection plus the actual time these lawsuits take – and perhaps we won’t get a closure of this situation by the end of the year. The consequences, nonetheless, are visible for Ripple even though they haven’t been found guilty yet.

Bakkt Going Public Through a Potential $2B Merger

According to Bloomberg, the Bitcoin futures platform Bakkt is soon going public through a (still officially not confirmed) merger worth 2 billion dollars.

Bakkt is majority-owned by Intercontinental Exchange Inc. and, according to the source (‘people with knowledge of the matter’), will soon go public in a merger with blank-check firm VPC Impact Acquisition Holdings, affiliated with Victory Park Capital.

Bakkt was launched in 2019 and its founder and first CEO was a US Senator, Kelly Loeffler. Furthermore, Bakkt’s last week’s total volume was $286 million (with 97% growth), proving the futures platform is a competitive player on the market.

VPC, Bakkt’s partner in the merger, is an SEC-registered alternative investment firm with a specialty in ‘identifying, partnering with and helping grow a business in the fintech sector’, according to the company’s chief executive John Martin. Stay tuned for updates!

And here we are once more, my fellow Anchorians – I hope this 74th edition of Anchor’s Weekly Crypto Roundup was thrilling and insightful. While all eyes are on BTC and its non-stopping journey to the moon, there are still other important events in the industry, and we’ll have all of them in mind.

One thing is certain – it’s never been more exciting to be a part of the global crypto community! The most important thing in these hectic times is to stay informed and knowledgeable; in this manner, you can get ahead of the events and truly make sense of them.

We are always happy to help with the latter! Now, you know the drill, until next week – I wish you fair winds and the following seas.