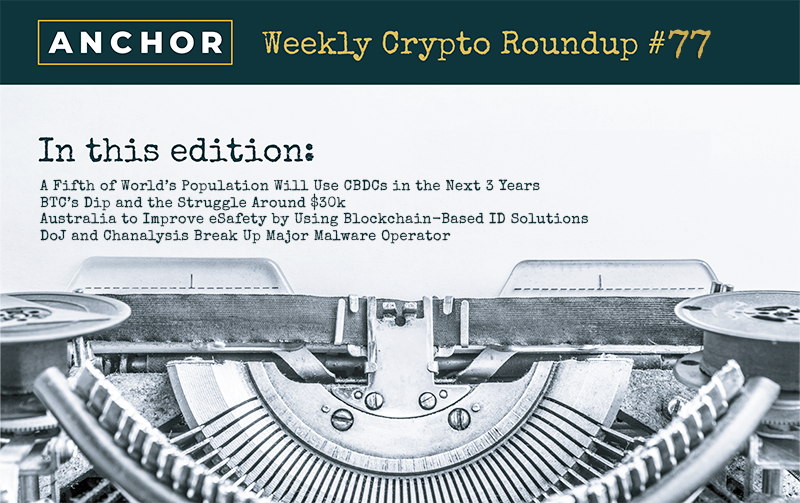 Another Friday brings the newest edition of Weekly Crypto Roundup – welcome aboard, my fellow Anchorians! I hope this past week has been kind to you and that, no matter where you live, you are safe and sound.

When it comes to the world of crypto, there are always exciting events and news pieces, and this week was no exception. New research shows that – in the next 3 years – a fifth of the world’s population will use CBDCs; Bitcoin’s price dipped and continues to struggle while blockchain and crypto fight against misuse of blockchain and crypto from within.

If this piqued your interest, then feel free to jump right into the 77th edition of Anchor’s Roundup! Let’s go.

According to the latest report by the Bank for International Settlements (BIS), CBDCs will be available to roughly 20% of the world’s population in the next three years.

This means that central banks collectively representing a fifth of the global population will likely issue their national CBDCs by the end of 2024. The report contains thrilling data, including the fact that 86% of global central banks are actively exploring CBDCs!

To be more specific, around 60% of central banks are currently experimenting with national digital currencies in any form, and 14% of them are moving forward with concrete action steps and pilot programs.

“If they are properly designed and widely adopted, CBDCs could become a complementary means of payment that addresses specific use cases and market failures. They could act as a catalyst for continued innovation and competition in payments, finance, and commerce at large,” explained BIS GM Agustin Carstens.

While the world is slowly getting closer to a cashless and all-digital financial system, not every country is equally keen on or equipped for the research and development of a CBDC.  Nonetheless, some ‘key players’ in the global economy and politics such as China and Russia have successfully gone down this road.

The BIS, or popularly known as ‘the central bank of central banks’, is also building an international CBDC settlement platform to encourage further development and usage of national digital currencies.

In the last few years, CBDCs have been shyly emerging around the world, but their pace notably quickened in 2020. As stated, now almost every central bank (86% of them) wants to know more about central bank digital currencies and how they can be implemented.

BTC’s Dip and the Struggle Around $30k

Well, we all knew the BTC price correction would come sooner or later. In December and January, BTC was soaring and constantly reaching new all-time highs in terms of price. Until the price finally dipped (even below $30,000), and ‘corrected’ itself.

For now, $30k remains a support line as the current price equals $31,390 (CMC). What’s next – bears or bulls? Experts’ opinions are divided.

Guggenheim’s Scott Minerd is not so optimistic: “Right now, the reality of the institutional demand that would support a US$35,000 price or even a US$30,000 price is just not there. I don’t think the investor base is big enough and deep enough right now to support this kind of valuation.”

However, Minerd believes that BTC is a great asset in the long run, but reminds that the market has its rules and natural regulations. The last rally was perhaps the most impactful bullish trend in a long time, but the reality is – that can’t last forever since the BTC market has its cycles.

Trading volume, nevertheless, suggests there still are optimistic buyers and that the price could go up again shortly.

One thing is certain – we cannot zealously predict the BTC price movement. In March 2020, during the notorious black swan event, Bitcoin’s price crumbled below $5k. Nine months later, it surpassed $20k and reached its all-time high. BTC can always surprise us all – so, do your research and hedge carefully.

We live in turbulent times where there are constant threats to public safety; moreover, those threats often have digital origins. Naturally, we should never be slaves to fear, and the potential solution lies in blockchain technology – according to the Australian eSafety Commissioner Julie Inman Grant.

Inman Grant explained how implementing blockchain-based digital IDs can help in uncovering criminals’ identities while protecting the personal data of all other users. With blockchain digital IDs, law enforcement could easily identify the culprits without accessing big databases.

Let’s use a vivid example: You go to a bar that requires all customers to be older than 21. You are 23, so that’s not an issue. However, when you need to prove your age at the entrance, you have to reveal a whole lot of information stated on your ID – full name, address, personal identification number, etc. Blockchain-based solutions would guarantee your age, but not reveal any other data.

Utilizing blockchain in big data is a growing trend; e.g. one million people in South Korea have driving licenses on a blockchain, several countries are trying to implement blockchain-based voting systems, and (due to the COVID-19 pandemic) health passports recording all necessary data emerged.

So, Australia’s eSafety Commissioner’s idea is this – anonymity is not to be stripped unless there is illicit activity involved. And blockchain is the perfect tool to achieve that.

While blockchain and crypto emerged from a narrative that celebrates anonymity and decentralization, it seems fitting that they should be the instruments in fighting the abuse of anonymity for illegal and immoral goals.

Again, we aren’t being realistic if we don’t admit that there are people utilizing crypto for selfish or even criminal goals. What we should do is to separate the wheat from the chaff – celebrate good examples and enhance them, while condemning the bad.

This week, the US Department of Justice, with the help of Chainalysis, seized almost half a million US dollars in crypto from NetWalker, a ransomware operator that is believed to have targeted hospitals globally amid the COVID-19 pandemic.

NetWalker hardware was tracked down in Bulgaria, and this led to the arrest of Sebastien Vachon-Desjardins, a Canadian national and NetWalker affiliate, who allegedly gained  $27.6 million through its malware.

‘’NetWalker ransomware has impacted numerous victims, including companies, municipalities, hospitals, law enforcement, emergency services, school districts, colleges, and universities. Attacks have specifically targeted the healthcare sector during the COVID-19 pandemic, taking advantage of the global crisis to extort victims,’’ it was stated in the DoJ’s announcement.

Not cool. Really not cool. Luckily, the culprits were caught and won’t continue taking advantage of innocent people.

Chin up, my fellow Anchorians! This week’s news may have been unfortunate in a certain way, but we have also learned about some positive trends regarding CBDCs and blockchain.

The industry of crypto is booming every day, and with great power, truly comes great responsibility. If we want to bring crypto closer to mass adoption, we must address the risks. Nonetheless, the only way is forward, and we’ll continue to break down the most important events for you, as we always have.

Stay safe and take care, my friends! Until next week, I wish you fair winds and the following seas.