PayPal Doubles Down on Cryptocurrencies, Visa to Enable Banks a Set of Crypto Services, DOGE Thanks Elon Musk While BTC Fights Gold 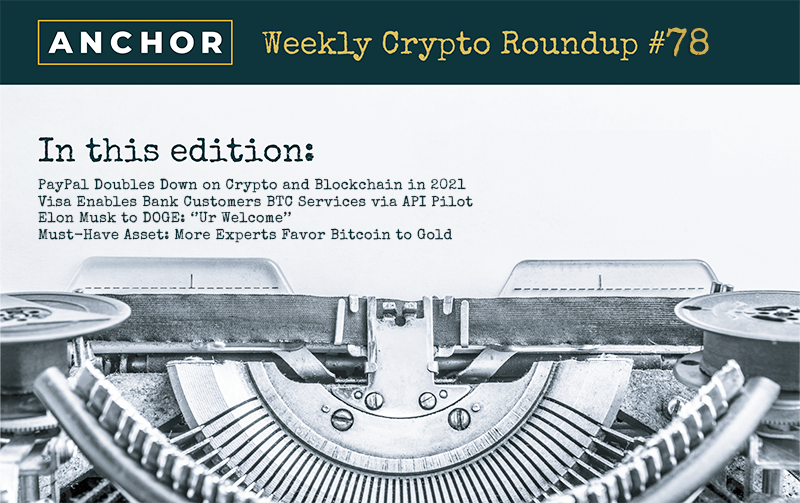 I know it’s hard to fathom, but it’s no longer January, my fellow Anchorians. Yeah, this three-month-long month is behind us and we’re slowly starting to smell another spring in the air. At least us in the Northern Hemisphere, you know.

Crypto is now sought-after even outside of our community and industry per se, and today we’ll talk about the recent PayPal’s and Visa’s efforts to bridge the traditional monetary system and cryptocurrencies. We’ll also talk about the vast influence the world’s richest man has on crypto, and how, according to some economists, BTC is surely surpassing gold as an asset.

Okay, but let’s not spoil it all straight away. Before we jump right into the 78th edition of Anchor’s Weekly Crypto Roundup, I just want to wish you all happier days ahead – stay safe and take care, my crypto enthusiasts!

PayPal Doubles Down on Crypto and Blockchain in 2021

PayPal’s crypto adventure ‘exceeded all expectations’ according to the company’s CEO, Dan Schulman, who shared his optimism on the Q4 earnings call. The strategy for 2021 is simple – double down on cryptocurrencies, blockchain, and digital currencies.

“We also saw an exceptional response from our crypto launch. […] The volume of crypto traded on our platform greatly exceeded our expectations,” said Schulman.

Crypto will become a funding source, used to shop at any of PayPal’s 29 million merchants, and 2021 will bring an “extensive roadmap around crypto, blockchain, and digital currencies.”

But the plans go even further – the company is actively working with central banks and regulators in order to shape the future of a post-cash world. Crypto also helped with user activity, according to PayPal, since crypto-oriented users logged in twice as often.

PayPal allowed users from the US a direct purchase of cryptocurrencies in November,  which led to achieving a new record in volume on the platform – $242,000,000 in transactions on January 11th.

We all knew this payments giant’s acceptance of crypto will transform the industry, but even PayPal is surprised by the results. Naturally, digital money is the future, and PayPal surely doesn’t want to be excluded.

2021 will be full of financial and technical developments, no doubt, and we can’t wait to see new features in the year to come.

Visa’s efforts to provide crypto companies with bank cards are well-known; but now, for the first time, Visa is enabling banks with crypto services.

The new Visa API crypto pilot program will “easily connect into the infrastructure provided by Visa’s partner, Anchorage, a federally chartered digital asset bank, to allow their customers to buy and sell digital assets such as bitcoin as an investment within their existing consumer experiences.”

In the future, Visa envisions this program to extend to other cryptocurrencies and stablecoins – available in banks. Visa’s first partner is digital bank First Boulevard, but there will be others soon since a waitlist has been created.

Moreover, this new partnership is aimed to help the Black community according to First Boulevard’s CEO, Donald Hawkins, who hopes to raise financial literacy among the community.

Cuy Sheffield, Visa’s crypto lead, agrees: “Crypto is a gateway to financial literacy. It’s much easier to get people excited about money and important concepts around investing by just explaining what bitcoin is.”

Visa can be a perfect bridge between thousands of financial institutions, end-users, and cryptocurrencies. By bringing closer crypto and banks, Visa could easily intermediate and make significant changes within the industry.

Ah, what a single tweet can do today! Of course, not my tweet, but Elon Musk is something else entirely.

Dogecoin (DOGE) surged 25% in value in just a few minutes after the world’s richest man endorsed it on Twitter. Firstly, he just commented ‘’Doge’’ and later shared a doctored image from The Lion King – with DOGE’s mascot Shiba Inu as Simba, and him as Rafiki saying – ‘’Ur welcome’’.

Though Dogecoin is envisioned to be a joke, Musk’s recent comments and actions on Twitter had a vast influence on BTC as well, pushing its price back up. And what does Tesla and SpaceX CEO think about bitcoin?

Can’t hurt to have the world’s richest man as a fan of crypto, right? Especially since it’s Elon Musk, a man known to have millions of supporters around the world. As we saw earlier, only one of his tweets can do wonders within the community – imagine what could be possible if Musk decided to seriously engage in crypto projects.

Even the hashtag #ThanksElon began to trend in the US. This only proves what a small world we live in – everything is connected yet fast today. Of course, before Musk, former president Trump’s tweets (and some actions) used to influence BTC’s price, but negatively. I guess we don’t have to worry about that anymore.

We often hear various comparisons between BTC and gold – and as they are similar assets in some ways, mostly they differ.

Bluford Putnam of CME Group believes bitcoin is an emerging competitor to gold, especially since this precious metal’s on-going production is likely to increase this year, contrary to BTC’s fixed supply.

While explaining the idea of bitcoin’s fixed supply, Putnam said that even though the number of BTCs is limited, it doesn’t mean it’s a less volatile asset: “Shifting patterns with demand can have very large and abrupt impacts on prices, bitcoin has illustrated this point.”

According to Bloomberg’s Mike McGlone, bitcoin’s price will surpass $50,000 as more investors are ditching gold for BTC. McGlone also explained that $30,000 is a solid support line and that ‘’increasing institutional adoption and the potential for the benchmark to become a global reserve asset” will shortly drive the price over $50k.

BTC can’t replace gold overnight, but it can surely do it in the long run, experts agree. With vastly increasing global digitalization and available bridges, a lot of ‘’non-crypto folks’’ can easily invest in cryptocurrencies.

And this is the end of the 78th edition of our Weekly Crypto Roundup, my fellow Anchorians! This week’s article focused on the partnerships between the traditional financial system and cryptocurrencies and, well, DOGE memes. The world is in balance, I’d say.

Surely, 2021 will bring us many developments in terms of crypto availability, CBDCs, and digital money in general. And no matter what, Anchor will always be there to keep you posted!

Since I’ve already taken a fair amount of your time, there is only one thing left to do – I wish you fair winds and the following seas, my fellow Anchorians. Stay safe and take care!