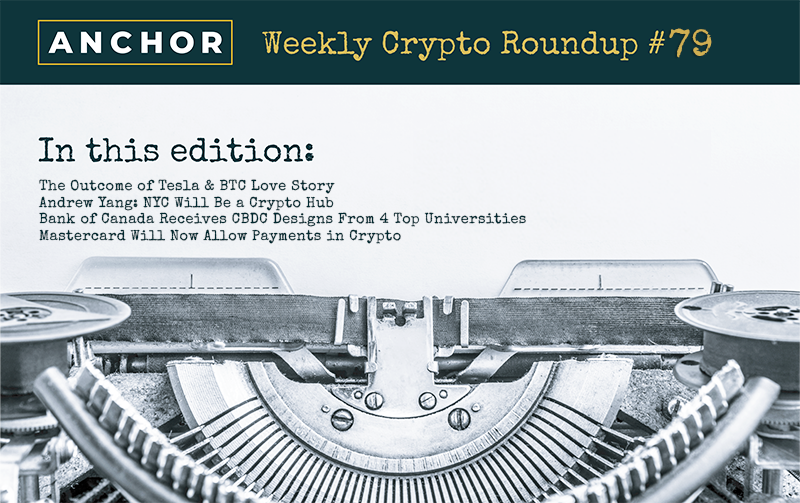 My dear fellow Anchorians, for 79 weeks we’ve been talking about significant events in the crypto industry. That’s around a year and a half! During that time, the industry changed its course and took major steps towards the mass adoption of cryptocurrencies.

In 2020, the pace notably quickened and now we have giants from other industries exploring crypto, as well as sovereign countries. Not to mention the technological developments regarding blockchain! The future is here, and a week now counts as a couple of years at the beginning of the crypto story. From a bunch of pure-hearted nerds to the world’s richest man and digital payments giants. We’ve come a long way as a community.

Now, this isn’t a memoir or an essay, you’ve come here for one reason only – NEWS! Of course, stay tuned for the trending topics within the industry; without further ado, we’re diving straight into the 79th edition of Weekly Crypto Roundup!

There aren’t many absolute truths and facts nowadays. We’re skeptical and doubtful. Nonetheless, here are some undeniable facts: the Sun rises on the East, after winter comes spring, and Elon Musk could pump anything!

Yes, after Tesla announced its shift to crypto and invested $1,5 billion into BTC (that’s right, nine freaking zeros), the whole world changed. Okay, I’m being slightly dramatic, but it indeed was a defining event for the industry which resulted in another huge price surge for bitcoin.

So, what’s the aftermath?

Tesla’s move was, in a way, a buying signal for everyone, and especially for the ‘whales’. Binance claims that, after the announcement, there were “unusually large BTC buy volumes.”

While everybody wants BTC, this spotlight is an excellent driver of other developments within the industry – crypto-related projects, it’s your time to shine! The latest events could easily be the most important moments in the history of crypto and the perfect catalyst of the changes discussed and started in 2020.

We are very excited, are you excited? We’re ALL excited, alright! Stay tuned, and we will keep you posted, as we always have.

Andrew Yang: NYC Will Be a Crypto Hub

It’s not personal and, don’t get me wrong, but there are so many politicians out there with a lot of promises. So, not everything they say is news-worthy. However, Andrew Yang, a former presidential candidate, is truly on his way to becoming the Mayor of NYC as the Democratic party frontrunner.

Since he actually might become the next mayor, and he is very pro-crypto, let’s hear what it’s all about. ‘’As mayor of NYC – the world’s financial capital – I would invest in making the city a hub for BTC and other cryptocurrencies,’’ he tweeted on Thursday.

Could New York City actually become the Western leader of digital payments and the usage of cryptocurrencies? It is a bold idea for this part of the world, some even call it a political suicide, but Yang was very concrete about it.

While BTC seems to be the sexiest topic at the moment, Yang is not a newcomer to crypto – he’s been vocal about BTC adoption for a couple of years now.

NYC, however, has a complex relationship with crypto since 2015 and the emergence of BitLicense legislation issued by the New York State Department of Financial Services.

Perhaps it’s time for things to change, and for New York to become a leader in digital finances. Tables turn all the time as decision-makers change. One thing is certain – the narrative has evolved. From ‘BTC is not real money’ to everybody wants a piece of it, in a short period of time. Kudos.

Good news coming from Canada – the country’s central bank is taking significant steps forward in terms of CBDC development. Four major Canadian universities have submitted their designs of the central bank digital currency to the Bank of Canada.

McGill University in Montreal focuses on “asymmetric privacy between the receiver and the sender of money” and places privacy protection as a priority in avoiding price distortions.

Jointly, the University of Toronto and York University propose a KYC-backed approach to ‘safeguard economic sovereignty’ in times of disruptive technological developments.

Bank of Canada recognized CBDCs as more than just a trend in policy and decided to develop the idea further. Deputy governor, Timothy Lane, said the COVID-19 additionally speeded things up: “The pandemic may bring us to a decision point sooner than we had anticipated.”

While everything is in the early stages, Canadian efforts might thrive along with other countries joining the bandwagon. We’re yet to discover the true impact of CBDCs on national economies and – extendedly – on the global economy as a whole. We just might get that answer sooner rather than later.

Welcome aboard, Mastercard! This payments giant will allow merchants to accept payments in crypto later this year. The company, however, hasn’t yet disclosed the details on which currencies will be used.

This isn’t Mastercard’s first ‘experiment’ with crypto – the company previously supported limited cryptocurrency transactions through its partners Wirex and Uphold. Nevertheless, cryptocurrencies weren’t used as a means of settlement in that manner, and Mastercard plans to change that with direct transactions in 2021.

Is it FOMO or a real trend? We already know about Visa’s latest efforts, not to mention PayPal.

“Our philosophy on cryptocurrencies is straightforward: It’s about choice. Mastercard isn’t here to recommend you start using cryptocurrencies. But we are here to enable customers, merchants, and businesses to move digital value,” said Raj Dhamodharan, Mastercard’s executive.

‘Moving digital value’ could mean stablecoins, but let’s not get ahead of ourselves. The news is still fresh and somewhat unofficial, but definitely worth sharing. Time will tell, and Roundups will convey.

You made it, champ! This 79th Roundup was surely interesting and full of new opportunities on the horizon. It looks like the crypto industry is finally on the verge of that big ‘breakthrough’.

While many of these stories are at their very beginning, the hints are strong. The revolution might come in a different form, but it’s coming nonetheless. And we are here to welcome it open-armed.

So, Elon Musk, New York City, Canadian CBDC, and Mastercard – these news pieces marked the week behind us. I hope you enjoyed this Roundup and found it insightful. There is only one thing left to do now – to wish you fair winds and the following seas, my fellow Anchorians!