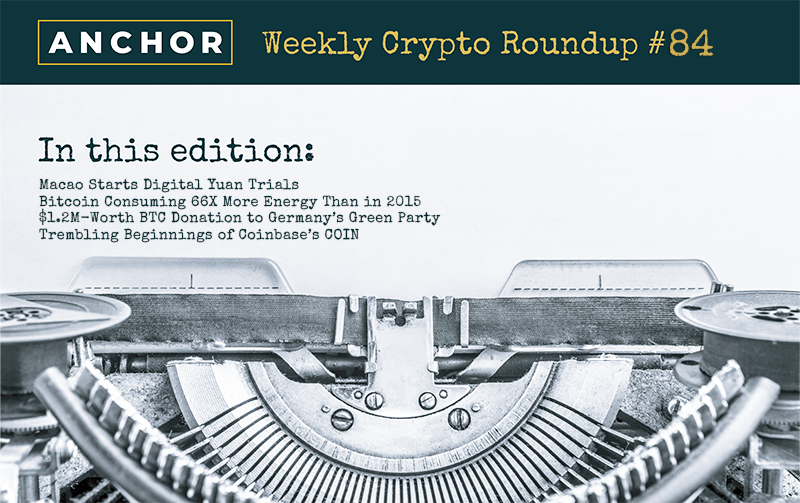 Welcome again, my fellow Anchorians! How’s life going? I hope you’re all safe and sound while enduring what seems to be a never-ending COVID-19 drama. Kudos to you!

Nonetheless, the crypto industry (unlike many others) seems immune to the pandemic. It’s actually soaring every day. Again, there have been many interesting events during the past two weeks, but today we’re talking about Macao’s efforts to revolutionize its financial landscape, how BTC ‘eats’ electrical power but also serves as a means to political donations, and what’s Coinbase’s story after going public.

Yes, many topics to cover but hopefully there’s a little something for every enthusiast. Okay, you get the picture of what this 84th edition of Anchor’s Crypto Roundup is going to be about – without further ado, let’s dive right in!

Digital yuan is in it to win it! Macao (formerly Portuguese colony, now an official Chinese island territory) decided to implement digital yuan into its everyday life. The government of Macao has an idea to utilize this digital currency to ‘combat tax evasion and money laundering in the gambling hub’.

“We will keep communication with the People’s Bank of China and start a feasibility study around launching the Digital RMB (yuan) in Macao. Therefore, we need to add provisions in relevant law to allow for the introduction of digital currencies,” said Ho lat Seng, the chief executive officer of the Chinese island territory.

So, legislature comes first, not to leave any ambiguity. While Macao officially is Chinese territory, we are aware of China’s ambition to insert the digital yuan as a new world currency. Macao is a perfect sandbox outside of China itself.

While the official currency in Macao is pataca, the digital yuan could easily overthrow it.  Especially if the authorities start insisting on using digital yuan as a means of settlement.

Victoria White of Inside Asian Gaming  had earlier mentioned that digital yuan could be the right way to bring Macao back on its feet after being affected by the pandemic: “Ultimately, this could boost overall consumer spending in the mass and premium mass markets, which are the precise segments that have been most affected by the drop in footfall and visitations since the start of the COVID-19 pandemic.”

Of course, some are concerned about ‘greater government scrutiny’ and ‘control over money flows’, perceiving it as a totalitarian move.

Well, if you are worried about another country’s CBDC becoming globally dominant, go make your own. The future doesn’t wait for anybody.

We all know that Bitcoin and its PoW, being fully digital and all, simply consume a lot of electrical energy. What we didn’t know is that, over the past 6 years, BTC power consumption has risen 66 times! How so?

According to a Citigroup Inc. report, Bitcoin’s responsible for a serious increase in power consumption while also leaving a significant CO2 footprint. This particular topic was one of the cryptocurrency’s ‘weak spots’ as it made some influential people angry.

Bloomberg agrees – mining will face scrutiny very soon. And Citigroup added: “As the value of Bitcoin rises, so should its energy consumption.”

The price surge, however, isn’t equivalent to the power consumption surge. While BTC ‘eats’ electrical power 66 times more, the price has gone up 170 times over the same period.

“Mining and use of these ‘coins’ is undoubtedly energy-intensive and could face greater regulatory scrutiny as adoption expands, especially if the U.S. continues to scale its crypto footprint and market-leader China cracks down on Bitcoin mining if it adversely impacts its climate goals,” the Cambridge Bitcoin Electricity Consumption Index estimates.

To be perfectly honest and blunt here, China’s crypto footprint is nothing compared to China’s overall carbon footprint.

I know this is sort of a thin-ice topic, but the solution might be in the usage of nuclear power. Yes, China, Iran, nukes – yikes. But we have to keep in mind that the conversation about nuclear power is an emotional, not a practical one. I get it, we all fear it, but it’s not just about the weapons – nuclear energy could be one of the keys to protecting Earth’s natural resources. We’ll leave it to smarter people, I guess.

Here’s a fun one. One crypto enthusiast, a German national, decided to give away all of his Bitcoin gains to the country’s Green party. Why? “The donor has made it clear to us that he sees these profits as undeserved wealth,” said a spokesperson for the party. I guess the donor thought the Greens will have a better use for it.

Donor’s name is Moritz Schmidt and according to Die Zeit, he’s a software developer from Greifswald who has given one million euros to Germany’s green party, also known as the Greens or Alliance 90.

Party’s spokesperson added: “In the meantime, he (the donor) sees the Bitcoin system critically, among other things against the background that the necessary arithmetic operations consume huge amounts of electricity.”

Way ahead of you – covered that one in the previous news piece! Jokes aside, it is strange how a person can be so much against Bitcoin, yet invest a lot of money in it and drive incredible gains. I guess that’s the reason why he didn’t hold onto it.

This has been the biggest recent donation for the Greens, Bundestag’s data shows. The donation, nevertheless, isn’t an anomaly since this party received more than $2,5 million in donations since the beginning of 2021.

I think this proves Bitcoin is just an instrument, a means, and we are the ones who decide how to deploy it. It would be marvelous to see this $1,2 million being used to help our planet.

Coinbase’s COIN is now listed on the Nasdaq, and the volatility has kicked in. Trading has begun and the stock already had its ups and downs.

Initially, COIN began trading significantly higher than the $250 reference stock price assigned by Nasdaq and shortly reached $430. The price, however, fell within the first minutes of trading and sits at $381.

You can leave crypto, but crypto won’t leave you! Funny how Coinbase’s shares meet the same volatile fate as cryptocurrencies listed on the exchange itself. The experts say that the price fluctuation could normalize in 3 to 6 weeks, though, and even lead to an increase in COIN’s worth.

The story of Coinbasee going public is important for the crypto industry since it is, in a way, a pilot for other projects. Naturally, it’s still too early to say anything about COIN’s fate, but it’s interesting to see how it all unfolds.

At the moment, we know Coinbase’s worth is very close to $100 billion. Wow. It’s not really a BTC market cap, but it is something. COIN is becoming very popular within the crypto ecosystem, too. For example, Binance and FTX are offering users access to Coinbase stock traded against stablecoins.

You shall not pass… Any further! Not because we don’t want you to, but because this legitimately is the end of the 84th edition of Anchor’s Crypto Roundup. We will see you soon, though!

Two exciting weeks are behind us, and this has been the news that marked them. CBDCs, BTC pros and cons, and Coinbase going public. Hope you learned something new in this edition – if not, come back in two weeks!

Okay, by now, you surely know the drill: I wish you fair winds and the following seas, my dear fellow Anchorians. Stay safe and take care!