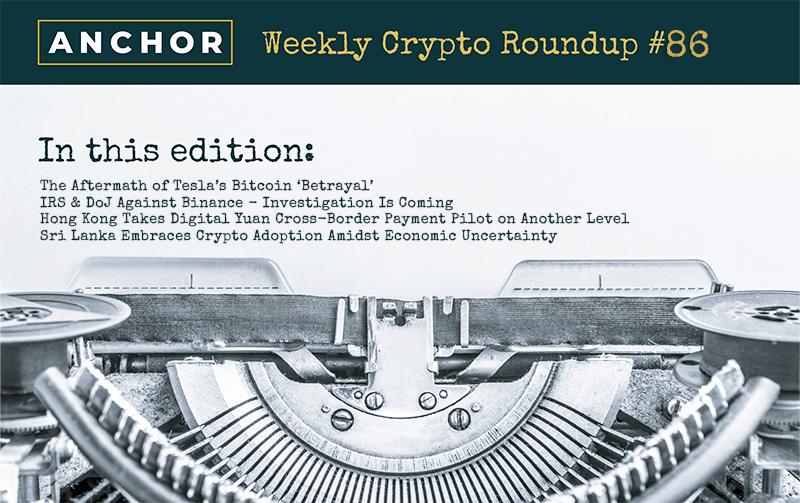 Fellow Anchorians, the 86th edition of Anchor’s Crypto Roundup is here! As always, we leave behind so many exciting events, but we’ll surely talk about the most interesting ones. The last couple of weeks have indeed been fruitful in the world of crypto!

Furthermore, the real-life implementation of the digital yuan continues as many countries around the globe adopt cryptocurrencies due to current economic uncertainty.

Now you know what this Roundup will be about, so there’s only one thing left to do – let’s dive right into this 86th edition!

The Aftermath of Tesla’s Bitcoin ‘Betrayal’

Okay, so Elon Musk has been in the spotlight ever since that SNL show. And just as we thought we’ve found the next bitcoin messiah, Tesla decided to put a stop to BTC payments. Why? Well, we know Tesla makes eco-friendly electric cars and BTC doesn’t seem to share that eco enthusiasm.

We have already mentioned bitcoin’s rising power consumption in some of the previous Roundups, but now it’s official – BTC has been labeled as a threat in energy consumption, and pro-green advocates, including Musk, are now against its usage.

Perhaps this was one of the main reasons why BTC price went as low as $46k – at the moment of writing, the current price equals $49,892.

This turn of events was beneficial to low energy consumption protocols such as NANO, HBAR, and EWT, as their price jumped right after Musk’s tweet.

While we’re at it, let’s also mention DOGE, since it kind of goes hand in hand with Elon Musk, too.

Another good news concerning DOGE – Coinbase is planning to list the coin in six to eight weeks. Popular demand, heh?

Based on these examples, we have once again seen how speculation can heavily influence the price. This isn’t crypto-exclusive, though. To sum it up, Elon Musk didn’t ditch cryptocurrencies, but he did say goodbye to accepting BTC payments. Can’t wait to see what’s next!

It’s still unofficial, but the consequences are already there – Binance is allegedly under investigation from the United States Department of Justice and Internal Revenue Service. Charge? Helping illegal trading activity from users in the United States.

‘’Binance Holdings Ltd. is under investigation by the Justice Department and Internal Revenue Service. […] As part of the inquiry, officials who probe money laundering and tax offenses have sought information from individuals with insight into Binance’s business, according to people with knowledge of the matter who asked not to be named because the probe is confidential. Led by Changpeng Zhao, a charismatic tech executive who relishes promoting tokens on Twitter and in media interviews, Binance has leap-frogged rivals since he co-founded it in 2017,’’ Bloomberg reports.

Binance, naturally, stated that they are taking this situation “very seriously and engage with regulators and law enforcement in a collaborative fashion.”

While the information is still unofficial, though coming from a reliable source, BTC, ETH, and BND have already felt the consequences. Bitcoin’s price fell by 3,8%, in Ether’s case 5%, and BNB’s price went down by 10%.

Apart from these two government agencies, the Commodity Futures Trading Commission was also allegedly investigating Binance in March. CZ said the accusation ‘has no teeth’.

According to the Hong Kong Monetary Authority, the first phase of digital yuan cross-border payments had been very successful, and now’s the time to scale it up!

Though the initial tests included multiple parties (not just the HKMA & the Digital Currency Institute of the People’s Bank of China), the next steps have already been carefully planned and prepared.

“We have tested the use of the related app, system connectivity, and certain use cases such as cross-boundary purchases. We are discussing and collaborating with the PBOC [People’s Bank of China] on the next phase of technical testing, including the feasibility of broadening and deepening the use of e-CNY for cross-boundary payments,” the HKMA revealed.

Partners on this project are the Bank of Thailand, the Central Bank of the United Arab Emirates, and naturally the PBoC. Additionally, the promotion of the digital yuan’s adoption would also be highlighted during the 2022 Winter Olympics in Beijing.

Now it all depends on the future partnerships – which central banks and/or international companies are willing to accept and implement China’s digital currency? While it’s unlikely to expect partners from the ‘West’, this is nonetheless a big world.

It’s no secret that China wishes to ensure global supremacy in terms of digital national currencies and thus further enhance its economic power. While there are other countries currently working on their CBDCs (e.g. Sweden), China’s still the front runner.

As we have already seen in the examples of Argentina, Turkey, and Brazil – economic uncertainty, inflation, and financial turbulences in general cause people to switch to cryptocurrencies. Sri Lanka is no exception.

For example, P2P bitcoin trading platform Paxful noted a 730% rise in trading volume between April 2020 and April 2021. This only proves that the harder the circumstances, the more resourceful people are.

While we support crypto legalization on a global scale, we understand the need to turn to alternative methods. Hopefully, one day, cryptocurrencies will be just a click away from any person on Earth.

My fellow Anchorians, this is the end of another thrilling Crypto Roundup. As always, I hope you found it insightful and informative.

So, in the world of crypto, some trends change on a daily basis, while others remain perpetual. We’re yet to see how Elon Musk will influence the industry, but we won’t lose focus regarding other important occurrences.

By now, I’m sure you know the drill very well – I wish you fair winds and the following seas! Stay safe and take care – I’ll see you in two weeks.