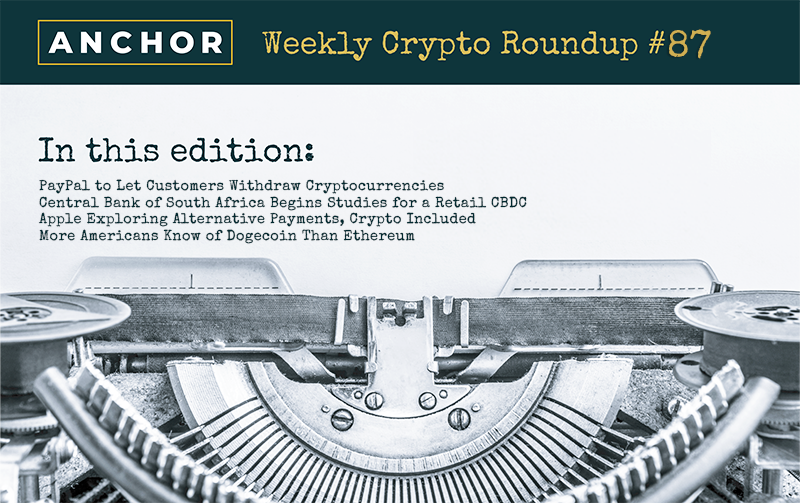 Welcome once again, my fellow Anchorians! I hope your last couple of weeks have been productive and interesting. If nothing, I hope you really enjoyed them. Some exciting events occurred in the world of crypto, including the infamous BTC dip. However, there are a few other important things to discuss, too.

PayPal is looking to scale up its crypto features, South Africa is exploring retail CBDC solutions, Apple wants to join the alternative payment bandwagon, while DOGE continues to surprise us all.

It looks like everybody wants to be a part of the phenomenon now, regardless of the recent bitcoin hurdles. Nonetheless, you came here for a reason, so don’t let me keep you – without further ado, we’re diving straight into the 87th edition of Anchor’s Crypto Roundup!

That was quite a revolutionary moment – when PayPal decided to include buying and holding of cryptocurrencies within the platform features, but the digital payment giant doesn’t want to stop there. The withdrawal function is coming soon as well, according to Jose Fernandez da Ponte, PayPal’s blockchain lead.

“We want to make it as open as possible, and we want to give choice to our consumers, something that will let them pay in any way they want to pay,” da Ponte said at CoinDesk’s Consensus 2021 conference. “They want to bring their crypto to us so they can use it in commerce, and we want them to be able to take the crypto they acquired with us and take it to the destination of their choice.”

The industry is speculating about another curious thing – PayPal’s proprietary stablecoin. Nevertheless, da Ponte said it was too early to speak about it. That wasn’t an explicit no, though.

He also reflected on the rising trend of CBDCs and said: “It absolutely makes sense that central banks will issue their own tokens. […] Sometimes we position the debate as CBDCs versus stablecoins, but it’s a bit of a fake debate. There is no trade-off. We think they will co-exist.”

According to da Ponte, it’s no secret that digital currencies are the financial future of the world, but his conclusion was: “On the subject of CBDCs, there are a lot of Powerpoints written, but not a lot of code written.”

We’re always happy to see well-known companies exploring cryptocurrencies; this is quite different compared to the popular paradigm just a few years ago when crypto was considered practically an illicit activity and nobody ‘globally respected’ wanted to have anything with it.

Looking forward to the new features, PayPal – keep up the good work!

Another central bank embraces the idea of its CBDC – this time, it’s the South African Republic, which has begun exploratory studies on a retail central bank digital currency.

The SARB opted for a retail CBDC, but this isn’t the bank’s first rodeo concerning digital money – in 2018, the SARB piloted Project Khokha, a tokenized fiat interbank payment system.

According to the central bank, the retail CBDC study is due to finish in 2022, and the next steps will be discussed afterward. At present, the SARB has no intention of issuing a retail CBDC but remains open to learning about it.

‘’The study will focus on the issuance of a domestic CBDC that can be used by consumers in South Africa for general retail purposes. The feasibility study will include practical experimentation across different emerging technology platforms, taking into account a variety of factors, including policy, regulatory, security, and risk management implications,’’ it was also stated in the release.

Expected or not? The tech giant, Apple, announced it’s exploring the next steps in ‘alternative payments’ and is looking for an adequate expert to be in charge of the project.

Maybe unexpectedly but so far, Apple has stayed on the sidelines while some other companies jumped on the opportunity to include cryptocurrencies in their portfolios. So, why the sudden change? Maybe Apple had an epiphany when Coinbase became the most downloaded app on the Apple Store, surpassing TikTok.

Be that as it may, Apple meeting crypto can lead to numerous opportunities and new features that could lead to a giant leap towards mass crypto adoption worldwide, considering there are now more than 1 billion active iPhones.

We can’t wait to see new developments regarding this matter, but as always, you know who will keep you posted!

Oh, DOGE, you started as a meme and became a crypto apostle! A recent survey conducted by Harris Poll and CouponCabin discovered that more Americans are familiar with Dogecoin than Ethereum.

89% of respondents said they have heard of cryptocurrencies, and BTC was naturally the most well-known coin with 71% of participants saying they were familiar with it.

What’s also curious is that 31% of participants have a positive outlook and believe crypto is the future of money, while 23% of respondents consider cryptocurrencies a scheme used to quickly gain more money.

We love a good survey, and this one has certainly brought interesting insights. Ethereum may have invented smart contracts and still is the heart of blockchain technology, but the power of memes remains stronger, for now.

It’s exciting, isn’t it? To see this phenomenon grow when, just a few years ago, you were the ‘odd one out’ talking gibberish words like ‘blockchain’. Now, cryptocurrencies are more accessible than ever and people are loving them! We love them as well, and that’s why we’re here with you.

Well, only one thing left to do now, my fellow Anchorians! As always, I wish you fair winds and the following seas. Stay safe and take care!