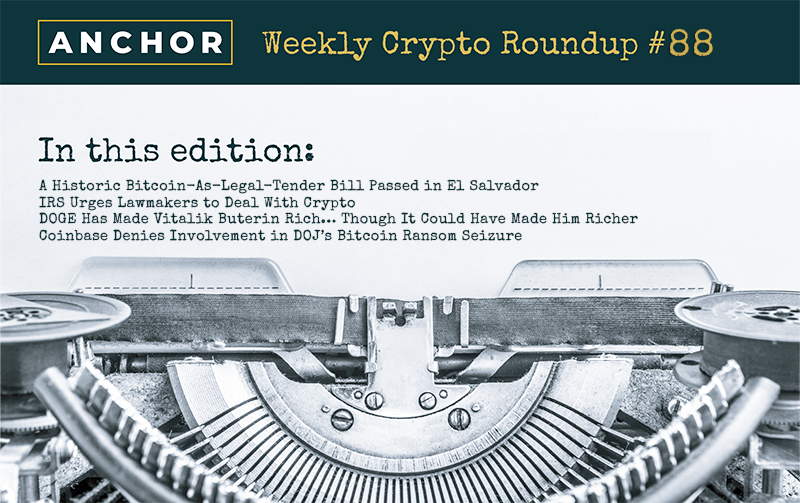 Long time no see, my dearest fellow Anchorians! Another two weeks have passed since the last edition of our Crypto Roundup and I sincerely hope you used that time to enjoy life and all the little things.

As usual, the world of crypto never rests, and this 88th edition will focus on some remarkable news. First of all, a historic moment happened in El Salvador where BTC became a legal tender (coins or banknotes that must be accepted if offered in payment of a debt). Wow! On the other hand, the US agencies and lawmakers are still very much against cryptocurrencies.

Vitalik Buterin gained millions of dollars from investment in Dogecoin while Coinbase denies involvement in the recent BTC ransom seizure by the DOJ.  As you can see, there’s plenty to discuss in the 88th Roundup, so without further ado – let’s dive right in!

A historic moment for the mass adoption of cryptocurrencies has happened in El Salvador! Parliament of this Latin American country passed President Nayib Bukele’s bill to make BTC Salvadoran legal tender, a currency that must be accepted if offered in payment of a debt.

The President tweeted on Tuesday: ‘’The #BitcoinLaw has been approved by a supermajority in the Salvadoran Congress. 62 out of 84 votes! History!’’

“It goes into effect immediately,” he said, stating that the Salvadoran government will allow a 90-days period for the infrastructure to be put into place.

Okay, what does this mean exactly? Well, for starters, every business will have to accept Bitcoin as a means of payment, by law. Every single one. “In the case of El Salvador, Bitcoin is going to be legal tender just as the U.S. dollar,” he added.

A meeting is also scheduled with the IMF to discuss the next steps. In the meantime, the government will also be releasing an official Bitcoin wallet. Another curious piece of information is that permanent residency will be available for anyone who invests 3 BTC in El Salvador.

“The purpose of this law is to regulate Bitcoin as unrestricted legal tender with liberating power, unlimited in any transaction, and to any title that public or private natural or legal persons require carrying out,” it’s stated in the bill.

Since this is all kind of new and revolutionary, the government took it upon itself to provide the infrastructure that enables Bitcoin users to instantly convert their BTC to USD, as well as the “training and mechanisms” to aid citizens unfamiliar with Bitcoin.

Salvadorans are making history and we wish to congratulate them from the bottom of our hearts! The trend seems to be rising since Mexico and Paraguay have also shown some interest in ‘legalizing BTC. Nonetheless, we’ll talk more about that when the time comes.

We know the Internal Revenue Service to be persistent and thorough, and now their focus is surely turning to cryptocurrencies. According to the IRS, lawmakers should do more regarding the fact many US residents are simply not paying taxes on crypto.

“The authority for us to collect that information is critical. […] The most recent market cap in that world — in the crypto world — exceeded $2 trillion and more than 8,600 exchanges worldwide, and by design most crypto, virtual currencies are designed to stay off the radar screen, so we will be challenged,” Rettig explained.

Therefore, he is asking for $32 million in the IRS’s budget for “crypto-related enforcement operations” as well as $41 million to fight cybercrime.

The narrative ‘against’ cryptocurrencies is building up in the US due to the holes in the official crypto regulation.  All three branches of government are now showing interest in dealing with the infamous crypto-taxes issue. “We do need additional tools, and we absolutely need additional resources,” Rettig concluded.

One of our favorite crypto geniuses and co-founder of Ethereum, Vitalik Buterin, has recently revealed how a $25,000 investment in Dogecoin has gained him more than 4 million dollars!

Buterin invested in DOGE in 2016, and some people viewed it as a futile investment: “At the beginning, people didn’t take it very seriously […] I just remembered thinking to myself, ‘how am I going to explain to my mum that I just invested $25,000 into Dogecoin?’ […] like, the only interesting thing about this coin is a logo of a dog somewhere. But of course, that was one of the best investments I have ever made,” Buterin shared.

The most amazing part is that Buterin gave all of that money away to charity: “I sold half of the DOGE, and I got $4.3 million, donated the profits to GiveDirectly.’’

Considering the price of DOGE went up to $0.50 at one point, perhaps Buterin should’ve hodled since he would know had $20 million in the famous dog token. Nevertheless, Vitalik was never a hungry-for-profit guy, and this is probably one of his favorite anecdotes to tell.

“DOGE becoming this big phenomenon, where there’s even a lot of people that have heard of DOGE that have not heard of Ethereum, is something that even I was not predicting,” he concluded.

A lot of people were speculating that Coinbase was behind the seizure of crypto assets related to the recent Colonial Pipeline ransomware attack. Philip Martin, Coinbase CSO, says: ‘’Nope!’’

“Coinbase was not the target of the warrant and did not receive the ransom or any part of the ransom at any point. We also have no evidence that the funds went through a Coinbase account/wallet,” Martin explained on Twitter.

The US government officials have seized $2.3 million in crypto from Colonial Pipeline ransom, but the story has some discrepancies. In terms of the how, the federal authorities claim to have obtained the Darkside group’s private keys.

Martin thoroughly explained his theory in a series of tweets, but he guesses that it was “some good ol’ fashioned police work to locate the target servers”.

The global crypto community loves to speculate, that’s for sure, but often it makes sense since there’s no smoke without fire. The only 100% known facts are – the government has seized over 2 million dollars in crypto, and Coinbase’s officials denied involvement.

But what’s life without some conspiracy theories now and then.

Watch out, it’s the end of the 88th Anchor’s Crypto Roundup! This one was particularly interesting since it has shown us the world remains divided in its stance towards crypto.

Another round of applause goes to El Salvador, and we can’t wait to report on this story’s developments. We hope you found this edition insightful and learned something new! The world of crypto is full of surprises, and hopefully, in two weeks, we shall talk about some other positive changes.

Until then, you know I wish you fair winds and the following seas, my dear fellow Anchorians! Stay safe and take care.