Saying Goodbye to John McAfee, Is BTC Failing or Coming Back, Binance Gets Back on Its Feet While Bank of Russia Pilots Digital Ruble 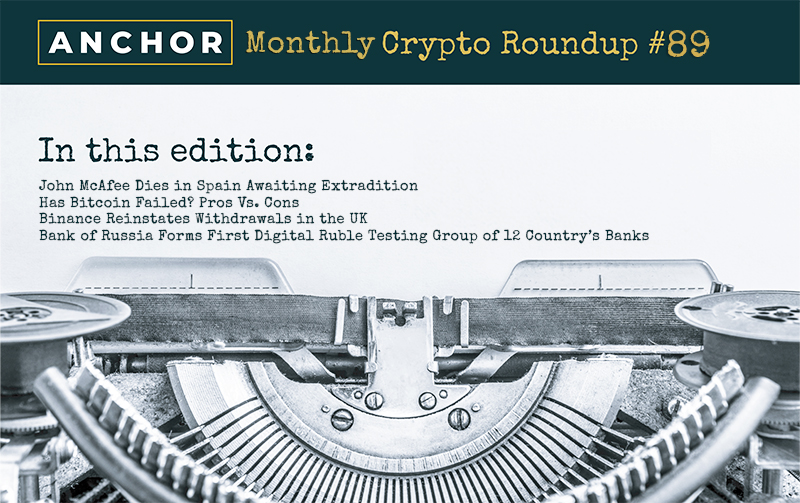 Missed us? No worries, my dear fellow Anchorians, our Crypto Roundup is still here! Its form changes, but the substance stays the same. Our Roundup editions will now be published every first Friday of the month, starting today!

So many things can happen in a month within the crypto industry, but we’ll make sure to keep you informed on the main trends and news pieces. Today’s edition has a little bit of everything – we’re saying goodbye to the controversial yet intriguing persona of John McAfee, discussing recent BTC’s ‘’failures’’,  and talking about global crypto updates.

Make yourself comfortable, and let’s dive right in – the 89th edition of Anchor’s Crypto Roundup is ready for you!

Every crypto enthusiast knew of John McAfee – his demeanor may have been excessive for some, yet the others praised his rebellious personality. On June 23rd, this well-known software entrepreneur, crypto apostle, US presidential candidate (and much more), has died in a Spanish prison, a few hours after his extradition to the US had been approved.

While the officials have confirmed that his death was a result of a suicide, there are some who dispute that fact saying the real reason was the fact ‘’John McAfee had too much to say’’. Here, we won’t divulge into conspiracy theories out of respect for McAfee’s family and friends.

Now, a little something about John McAfee’s life. I read somewhere that he ‘’turned paranoia into a fortune’’, which could be somewhat true since he was the founder of a famous antivirus software company bearing his name.

He made a run for the US presidency twice while openly expressing his libertarian ideological standpoint.  Of course, these presidential campaigns were more of an open political platform than an actual competition for McAfee, yet they remain quite a fun fact in his long biography.

While he was wanted on tax-related criminal charges, this wasn’t his first run-in with the law. McAfee was a suspect in an unsolved murder investigation of his neighbor in Belize, arrested for a DUI while carrying a gun, and also detained in the Dominican Republic for carrying high-caliber weapons, ammunition, and military-style gear on a yacht.

Due to his libertarian stance, it’s no wonder he was a self-proclaimed crypto guru – until his last day, he continued advocating for people’s right to be free of any kind of systematic rule. Again – some people hated him, some people loved him, but in any case – John McAfee’s life was everything but ordinary.

Has Bitcoin Failed? Pros Vs. Cons

Okay, we know that Bitcoin has been struggling for some time and still hasn’t managed to pull off that stable yet vast price recovery every hodler is dreaming about.

Some say BTC has failed as a currency, others predict a six-figure price by the end of this year. Who’s right and who’s wrong? Well, the truth usually lies somewhere in the middle.

Aswath Damodaran, professor of finance at New York University’s Stern School of Business and a serial BTC critic, said: “A good currency, in my view, is one that’s used to buy coffee, buy your house, buy a car, and on that count, Bitcoin has failed, and not just failed, it’s failed miserably.”

So, professor Damodaran believes that Bitcoin is not a viable option in everyday transactions and ultimately can’t be a means of payment. While we know well that BTC is very volatile, the idea behind this cryptocurrency is not to be the same as fiat money. Bitcoin has a limited supply, and therefore its price is destined to change due to the market fluctuations. Owning BTC is not made to buy a mere pizza. Not today, anyway.

On the other hand, Alex Mashinsky sees Bitcoin reaching $160,000 this year. He also explained the dip was unavoidable: “When you go too high, too fast, you are bound for a correction. You can see my tweets in both March and February saying ‘we’re going to have a crash, we’re going to have a correction.’ I predicted $30,000. Bitcoin is like a spring – we stretch it too much and we put too much leverage. Too many people got greedy.”

True story – we all knew the price correction must happen at some point since the buying enthusiasm couldn’t last forever. So, after reaching an all-time high of $63,000, BTC went down to $30,000, halving its price.

While the world’s most famous cryptocurrency still struggles to make a comeback in price, it is also unavoidable that this will happen at some point, too.

Binance Reinstates Withdrawals in the UK

Binance is back in business once again, after the Financial Conduct Authority (FCA) warned the exchange was not allowed to operate in the United Kingdom.

‘’Due to the imposition of requirements by the FCA, Binance Markets Limited is not currently permitted to undertake any regulated activities without the prior written consent of the FCA. No other entity in the Binance Group holds any form of UK authorization, registration, or license to conduct a regulated activity in the UK. The Binance Group appears to be offering UK customers a range of products and services via a website, Binance.com,’’ it was stated in the FCA’s release.

So, Binance naturally responded: ‘’We are aware of recent reports about an FCA UK notice in relation to Binance Markets Limited (BML). BML is a separate legal entity and does not offer any products or services via the Binance.com website.’’

Some would say tomato/tomato, but this legal barrier seems enough to keep Binance’s UK operations unaffected. On Tuesday, users couldn’t make deposits/withdrawals in pound sterling, but already on Wednesday, sterling withdrawals from its platform had been reactivated, and ‘’users are now able to buy digital coins with debit and credit cards‘’.

Is this another attempt of witchhunt on cryptocurrencies or a real legal hurdle? Rest assured, Anchor will follow up on it.

Russia may have a love-hate relationship with cryptocurrencies, but its stance on CBDCs is clear – yep, they’re seriously going for it. Twelve Russian banks, including Sberbank, VTB, and Tinkoff Bank, will assist its central bank in piloting digital ruble in 2022.

This is all going according to the government’s plan to create a prototype of the digital ruble platform by the end of 2021 and roll out testing in January 2022.

The first testing stage is meant to include 12 banks and work on the issuance and distribution of digital ruble. Later, the Bank says, the number of participants and operations will extend.

While the details are still unknown, having the central bank involved, along with the state-backed and the private banks, means business.

Some can’t help but notice the difference in the country’s viewpoint on cryptocurrencies and CBDCs. I guess everyone’s in charge of their own backyard, and the biggest country on Earth has always found the centralized method more appealing.

And this first edition of Monthly Crypto Roundup, and the 89h edition in total, has come to an end!

I’m sure you’ll adapt easily to our new publishing schedule, and remember – our content stays the same. Enjoy your July, fellow Anchorians, take some time off if you can, or at least do something nice for yourself – you deserve it. I’ll see you again on the first Friday in August!

Until then, you know the drill – I wish you fair winds and the following seas. Stay safe and take care!