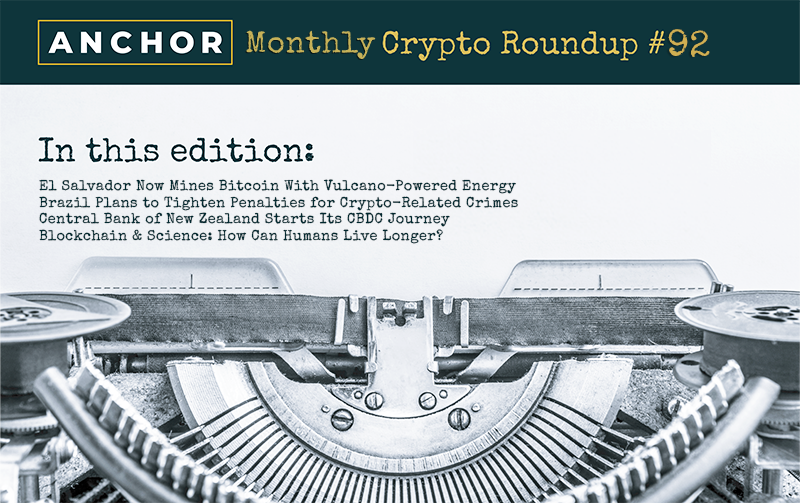 Long time no see, my fellow Anchorians. Alas, we are joined in another, 92nd, edition of Anchor’s Crypto Roundup! How’s your September been?

Naturally, a lot can happen within a month, and a lot did happen. This time, we’ll talk about the latest crypto haven – El Salvador; why Brazil plans to be more strict with crypto-related crimes; a kiwi CBDC; and endless possibilities for blockchain technology.

Before we buckle up and embark on our new journey, let’s congratulate ourselves for enduring this crazily uncertain year and a half – we’ve made it this far! As the crypto industry grows and develops, so do we; let’s embrace the new opportunities! Okay, Ted talk over, we’re diving straight in!

The president of El Salvador, Nayib Bukele, is teasing us once again! On September 28th, President Bukele revealed the ‘’first steps’’ of another crypto endeavour – mining BTC using volcano energy.

He shared a video on Twitter, which now has over 2,5 million views, showing an overview of a power generation facility, with technicians enabling crypto mining rigs.

While renewable source-powered mining is still in its testing phases, it literally seems that El Salvador’s plans are going full steam ahead. There have been many talks about bitcoin’s huge energy consumption, and this issue has been highlighted as one of the biggest flaws concerning the world’s first cryptocurrency. Not anymore, Bukele says.

In June, the President announced that the state-owned geothermal electrical company LaGeo will manage a Bitcoin mining plant powered with “very cheap, 100% clean, 100% renewable, 0 emissions energy.” And now that dream’s becoming a reality.

Why volcanos? Well, El Salvador has 20 active volcanos in the uninhabited regions of the country. Instead of being wasted, this energy can be used for many things, including mining BTC.

We love the news coming from El Salvador, it somehow always makes the gloomy days a tad more interesting. Rest assured, we will keep you posted on all updates coming from this Latin American country – we, along with the rest of the world, are so eager to see what happens next.

Another piece of news is coming from Latin America, this time from its biggest country, Brazil! Brazilian lawmakers are currently working on stricter regulations on cryptocurrencies, particularly regarding crypto-related crimes.

A new bill has been approved by the Special Committee of the Chamber of Deputies, and it brings quite a few changes. For starters, the fines have been increased from one-third of the amount of laundered money to two-thirds. Additionally, the new bill proposes to raise minimum prison terms from three to four years, and maximum prison time from 10 years to 16 years and eight months.

Over 300,000 people were affected by crypto scams only in Rio de Janeiro, and Federal Deputy Aureo Ribeiro believes it’s time to put an end to scammers: “With the lack of regulation, people have nowhere to turn. The market will advance and adjust in Brazil. There will no longer be profiteers using technology to deceive millions of Brazilians.”

While concerned about the schemes, Ribeiro is not against cryptocurrencies per se. He claims that Bitcoin will become accepted as payment in Brazil once the bill is passed into law. It’s all about the fair play, he says.

Unfortunately, we all know people get scammed on a daily basis, especially if they are new to cryptocurrencies. And we agree – transparent regulation, combined with educational resources, can indeed be helpful.

The list is getting longer by day, my fellow Anchorians. Many central banks around the globe are developing or at least discussing CBDCs. Today, we talk about recent efforts from New Zealand.

‘’The declining use, acceptance and availability of cash in New Zealand, and emerging innovations in private money, namely stablecoins, make this an opportune time to consider a central bank digital currency (CBDC),’’ it was stated in the issue paper.

While there is an increased interest, the RBNZ won’t start public consultations before July. Naturally, there are many things to consider but what’s important is that another central bank recognizes CBDCs as the future of money. Quite literally.

The Longevity Science Foundation from Switzerland has decided to invest more than $1 billion over the next 10 years in technologies that can enable its ultimate goal – a 120-year human lifespan. Blockchain is, logically, one of those technologies.

Besides that, the organization is accepting donations in cryptocurrencies. Contributors will also get voting rights on the projects’ future!

‘’The focus of the Foundation will be to select support projects in four major areas of healthy longevity medicine and tech – therapeutics, personalised medicine, AI, and predictive diagnostics. The Foundation is seeking to fund projects that can make a significant difference in people’s lives as soon as possible – even within five years,’’ it was stated in the press release.

During this year and a half, we have certainly learned that our health is fragile, and investing in science is crucial in order to improve our well-being.

Quite a combo of news in this month’s edition, right? From Salvadoran revolutionary crypto efforts, over fighting scammers, to expanding human lifespan using blockchain… with a touch of CBDC updates.

Nonetheless, this 92nd Roundup must come to an end! We hope that you found it interesting and insightful; and if you learned something new, then our mission was a success. Until next time, please stay safe and take care. As always, we wish you fair winds and the following seas, our dear fellow Anchorians!