Digital Yuan Adopted by 140 Million People, Why Memcoins Can Be a Real Deal, NFTs Wanted in the Asia Pacific 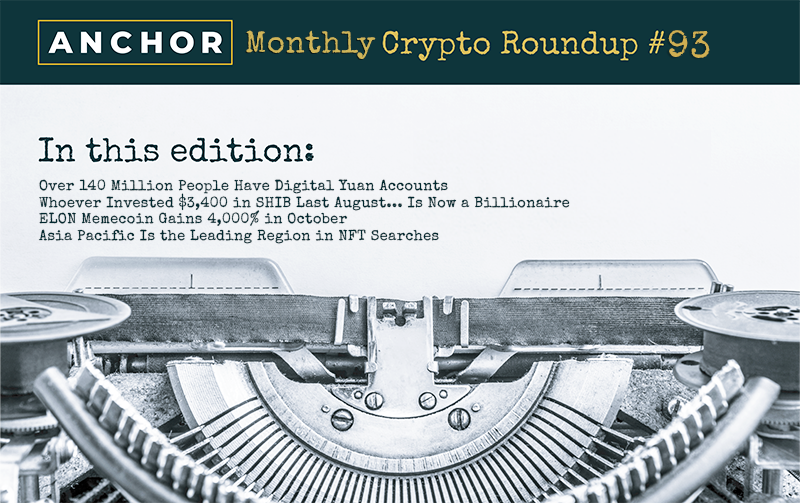 Another month flew by, my fellow Anchorians! There are now only 57 days left until 2022 and, truth be told, some of us didn’t even get used to the fact it’s not 2020 anymore.

Be that as it may, the world keeps turning and the world of crypto growing! In this edition, we’ll talk about the most successful CBDC at the moment – digital yuan, how memecoins such as SHIB, ELON (previously DOGE) can be a fun yet fruitful investment, and how NFTs are the new sexy, especially in Asia Pacific region.

So, crypto roads lead to many places, but sometimes an investment in a nameless coin can bring you a fortune – isn’t that magnificent? How’s your luck these days, by the way? I certainly hope a good one will come soon to you, but until then – let’s dive into the 93rd edition of Anchor’s Crypto Roundup!

According to the PBoC, the digital yuan is thriving! The Bank’s executive claims digital yuan (e-CNY) hit 62 billion yuan in total transactions processed while over 140 million people now have a digital yuan account. Corporates have another 10 million accounts as well.

China has shown the biggest efforts when it comes to the utilization of CBDCs, betting on its digital yuan to become an alternative for cash transactions. So far, both corporations and individuals have reacted positively to the currency.

However, Mu Changchun, the head of the digital currency institute of the PBoC, said there is no official date for the launch. While the e-CNY has yet to wait to see the light of the day on a larger scale, the Bank has already partnered up with various stakeholders in order to implement continuous digital yuan transactions.

Over the last couple of years, many companies in China agreed to be a part of the pilot phase, and it seems that everything is going according to plan. 62 billion yuan is equal to approximately $9.7 billion – which is, you know, quite a lot of money. This scale of transaction worth means business, and PBoC only plans to go up from here.

The Digital yuan has big ambitions, we’ll just have to wait and see how the rest of the world will react to the currency.

Whoever Invested $3,400 in SHIB Last August… Is Now a Billionaire

You know Shiba Inu (SHIB) now, but not everybody was eager to invest much in the coin in August last year. The one lucky (or more likely the clever) person who did that now holds 70,200,003,107,594 SHIB which is worth… wait for it… $5.63 billion. Yeah, our thoughts exactly.

Etherscan shows that the SHIB hodler bought the token on nine different occasions in August 2020, and it cost them $3,400 (in wETH).

Becoming a billionaire can seem so easy, right? Well, since the Shiba Inu worth jumped by more than 94,278,239.8% over the past year, miracles were made possible.

According to CoinGecko, the total market cap of SHIB is currently around $40,3 billion. Surprise or not, at one point, it was bigger than DOGE’s market cap: ‘’By CoinGecko’s measurement, $SHIB has definitively flipped $DOGE. An absolutely historic day for memecoins.’’

Memecoins can be fun, but they can thrive in the most unexpected ways. While the question of liquidity remains, vox populi gives these tokens undeniable worth. What a time to be alive, ladies and gents! What a time.

Oh, and you thought we were done with memecoins? Never! There is another, rather interesting one named after Elon Musk himself (quite literally, ELON) and it gained almost 4,000% growth in the last month.

The total market cap of ‘Dogelon Mars’ was worth $26 million on the first of October, while it finished the month triumphantly at $1.19 billion, on the 92nd spot on CMC.

How, you might be wondering. Well, chances are, the listing on OKEx and Crypto.com had something to do with it since the token rallied by more than 200% after these events.

‘’Thank you Martians for all of your overwhelming support to get us listed on OKEx.  It is only one of many stops on our intergalactic mission. $ELON emissions are being transported to your wallets right now,’’ was tweeted on the official account.

A lot of people, even some crypto enthusiasts, were skeptical about the whole DOGE story at first, but besides SHIB and ELON, there are more dog-inspired memecoins such as SAMO (Samoyedcoin). What’s next, dachshund? Would personally hodl that one without an issue.

The pattern here is obvious, but how long will it last? Only one way to find out – keep up!

Asia Pacific Is the Leading Region in NFT Searches

NFTs are one of the sexiest inventions of the world of crypto, available and comprehensible to your average Joe and Jane, or half of the Hollywood as well.

It comes as no surprise that ‘’NFT’’ was searched more than ‘’cryptocurrencies’’ in September, once again after a surge in March. And the people in the Asia Pacific region are keener on it than the others, Google Trends confirm.

China, Singapore, and Hong Kong are the champions of the NFT Google searches, it seems. After the leading trio, other countries that are interested the most in NFTs are Venezuela, the Philippines, Cyprus, Canada, New Zealand, Australia, and the United States.

Since trading cryptocurrencies is, well, now kinda illegal in China, it’s understandable why people are turning to other options, such as NFTs. Khashayar Abbasi from Bankless Times confirms: “The country recently banned cryptocurrency trading, which could see crypto-keen investors move over to NFTs.”

People can be truly resourceful when needed, and since there are quite a few countries that aren’t so friendly towards cryptocurrencies, enthusiasts from these places have to adapt.

‘’Before, wealthy people would buy expensive watches to show off their wealth and only those who met them in real life would see what they were wearing. Now, you can buy an NFT, post it on social media and everyone around the world can verify 100% that it’s yours,” Abbasi noted.

This Roundup surely isn’t long enough to cover all important occurrences in the crypto industry in a month, but we can scratch the surface and keep you interested. The 93rd edition is officially done, and hopefully, you found it insightful.

Whether it’s ‘’serious CBDCs’’ or ‘’humorous memecoins’’, there is a bit for everyone in this big wide world. You choose your cup of tea and keep an open mind! Ok, by now, you surely know the drill pretty well – until next time, I wish you fair winds and the following seas, my fellow Anchorians. Stay safe and take care.